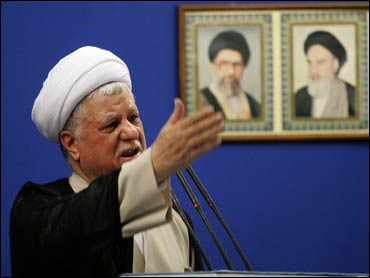 Argentine prosecutors asked a federal judge on Wednesday to order the arrest of former Iranian President Hashemi Rafsanjani and seven others for the 1994 bombing of a Jewish cultural center that killed scores of people.

The decision to attack the center "was undertaken in 1993 by the highest authorities of the then-government of Iran," prosecutor Alberto Nisman said at a news conference.

He said the actual attack was entrusted to the Lebanon-based group Hezbollah.

The worst terrorist attack ever on Argentine soil, the bombing of the Jewish cultural center in Buenos Aires killed 85 people and injured more than 200 when an explosive-laden vehicle detonated near the building.

Iran's government has vehemently denied any involvement in the attack following repeated accusations by Jewish community and other leaders here.

Iranian authorities contacted here by The Associated Press said they would have no comment.

Prosecutors urged the judge to seek international and national arrest orders for Rafsanjani, who was Iran's president between 1989 and 1997.

Nisman and fellow prosecutor Marcelo Martinez Burgos said they suspected that Hezbollah undertook activities outside Lebanon only "under orders directly emanating from the regime in Tehran."

Federal Judge Rodolfo Canicoba Corral had no public comments following the news conference. The judge, under Argentine law, is allowed an indefinite amount of time to accept or reject the recommendations.

The two prosecutors head a special investigative unit probing the attack, which flattened the former Jewish center, since rebuilt into a heavily guarded fortress-like compound.

The investigation unit was created after Argentina's federal courts in 2004 which halted a botched investigation into the case by then-judge Juan Jose Galeano. Galeano was removed from the case and later stripped of his judgeship.

Nisman announced in November 2005 that investigators believed a suspected 21-year-old Lebanese Hezbollah militant had been identified as the suicide bomber.

The attack on the seven-story Jewish center, a symbol of Argentina's more than 200,000-strong Jewish population, was the second of two attacks targeting Jews in Argentina during the 1990s.

A March 1992 blast destroyed the Israeli Embassy in Buenos Aires, killing 29 people in a case that has also been blamed on Hezbollah.

Some speculated the bombing was inspired by Argentina's support for the U.S.-led coalition that expelled Iraq from Kuwait during the Gulf War in the early 1990s. Others said Argentina's Jewish community, one of the largest in Latin America, represented an obvious target for Israel's opponents.

Although Jewish community leaders and others have suspected the involvement of Middle East terrorists, a lack of progress in tracking down the masterminds has made families of the victims increasingly bitter.

In 2004, about a dozen former police officers and an accused trafficker in stolen vehicles were acquitted of charges that they had formed a "local connection" in the bombing.

Jewish center leaders said Wednesday they had no immediate statement.