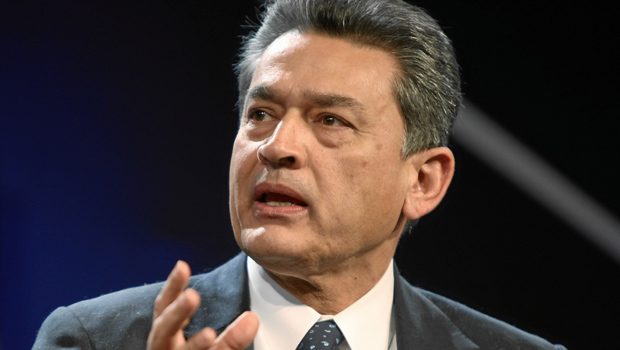 NEW YORK A former Goldman Sachs (GS) and Procter & Gamble (PG) board member once widely respected worldwide for his business smarts was sentenced Wednesday to 2 years in prison for feeding inside information about board dealings with a billionaire hedge fund owner who was his friend.

Rajat Gupta, 63, of Westport, Conn., was sentenced by U.S. District Court Judge Jed Rakoff, who also ordered him to pay a $5 million fine. The Harvard-educated businessman long respected on Wall Street was one of the biggest catches yet for the federal government in its five-year crackdown on insider trading that has so far resulted in 69 convictions.

Gupta, reading from a statement, said: "The last 18 months have been the most challenging period of my life since I lost my parents as a teenager.

What closing U.S.-Mexico border would cost

"I regret terribly the impact of this matter on my family, my friends and the institutions that are dear to me. I've lost my reputation I built for a lifetime. The verdict was devastating."

The dealings by Gupta that were highlighted at his spring trial stemmed from his relationship with Sri Lanka-born Raj Rajaratnam. The one-time billionaire hedge fund boss controlled up to $7 billion in accounts, giving him a firm footprint in the financial markets and influence that impressed someone as widely regarded as Gupta.

"He was a role model and icon," defense attorney Gary Naftalis said. "He is no more."

Prosecutors described how Gupta raced to telephone Rajaratnam with stock tips sometimes only seconds after getting them from board conference calls, allowing Rajaratnam to make more than $11 million in illegal profits for him and his investors. Rajaratnam is serving an 11-year prison sentence after his conviction at trial last year.

The narrower insider trading case against Rajaratnam and his co-conspirators resulted in 26 convictions and was described by U.S. Attorney Preet Bharara as the biggest insider trading case in history, successful in part because of unprecedented use of wiretaps more familiar to juries at mob and drug trials.

Prosecutors say Rajaratnam earned up to $75 million illegally through his trades while Gupta's attorneys point out that their client earned no profits.

At trial, Gupta was convicted of three counts of securities fraud and one count of conspiracy, insider trading charges that prosecutors said should result in a prison sentence of up to 10 years in prison.

"This is a crime easy to commit, hard to catch," the judge said at sentencing. "Therefore the need for general deterrence is strong."

Prosecutors accused Gupta, a former chief of the global consulting firm McKinsey & Co. and a onetime director of the huge consumer products company Procter & Gamble, of "above-the-law arrogance" in feeding Rajaratnam inside tips between March 2007 and January 2009.

"Gupta's crimes are shocking," the government wrote. "Gupta's crimes are extraordinarily serious and damaging to the capital markets. ... It understandably fuels cynicism among the investing public that Wall Street is rigged and that Wall Street professionals unfairly exploit privileged access to information. This is particularly troubling at a time when there is widespread concern about corruption, greed and recklessness at the highest levels of the financial services industry."

In their presentencing brief, defense lawyers cited Gupta's many good deeds worldwide, saying they were unusual enough to warrant a sentence of probation with instructions to perform community service.

Naftalis told the judge that Gupta had "one of the best reputations on the planet. His loss of reputation is severely strong punishment."

The defense noted that the Rwandan government supported a program in which Gupta would work with rural districts to fight HIV, malaria and extreme poverty and to help provide food security. The lawyers said the Rwandan government would join with a U.S.-based organization already working in the country to ensure effective supervision of Gupta's service.

They also said prison would spoil the efforts by Gupta, who was born in Kolkata, India, to develop new initiatives, including the Urban Institute of India, meant to bring the private sector, academia and the Indian government together to address accelerating migration to India's cities. The more than 400 letters written to the judge on Gupta's behalf included documents signed by Microsoft co-founder Bill Gates and former United Nations Secretary-General Kofi Annan.

"The conduct for which he was convicted represents an isolated aberration and a stark departure from this personal history," the lawyers wrote.

At Gupta's trial, which began in May, the government highlighted a Sept. 23, 2008, phone call it said was made from Gupta to Rajaratnam only minutes after Gupta had learned during a confidential conference call about Warren Buffett's planned investment through Berkshire Hathaway of $5 billion in Goldman.

Moments after the phone call ended at 3:55 p.m., Rajaratnam purchased $40 million in Goldman stock - an 11th hour trade that ended up making him nearly $1 million - at the height of the financial crisis that had engulfed the country.

In another recorded phone call in 2008, Rajaratnam told one of his traders that he had got a tip "from someone who's on the board of Goldman Sachs" that Goldman was facing an unexpected quarterly loss.

Gupta, prosecutors said, was motivated to help Rajaratnam because he had a financial stake in some of the hedge fund manager's business ventures.