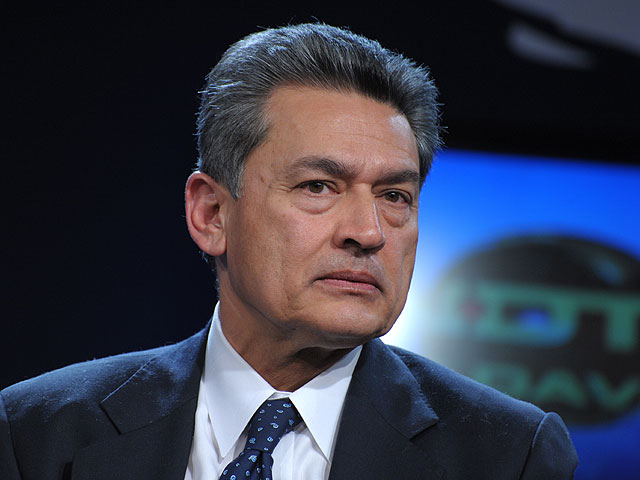 NEW YORK - A former board member of Goldman Sachs and Proctor & Gamble became the most prominent business executive arrested in the biggest insider trading case in history when a securities fraud indictment was unsealed against him Wednesday.

The indictment accuses Rajat Gupta of cheating the markets with Raj Rajaratnam, the convicted hedge fund founder who was the probe's prime target.

He was awaiting an arraignment on one count of conspiracy to commit securities fraud and five counts of securities fraud. The charges carry a potential penalty of 105 years in prison.

The indictment unsealed in U.S. District Court in Manhattan alleges Gupta shared confidential information about both Goldman Sachs and Procter & Gamble at the height of the financial crisis from 2008 through January 2009, knowing that Rajaratnam would use the secrets to buy and sell stock ahead of public announcements.

In a release, U.S. Attorney Preet Bharara said Gupta broke the trust of some of the nation's top public companies and "became the illegal eyes and ears in the boardroom for his friend and business associate, Raj Rajaratnam, who reaped enormous profits from Mr. Gupta's breach of duty."

Alluding to the wide scope of the prosecution, he added: "Today we allege that the corruption we have seen in the trading cubicles, investment firms, law firms, expert consulting firms, medical labs, and corporate suites also insinuated itself into the boardrooms of elite companies."

FBI Assistant Director-in-Charge Janice Fedarcyk said the arrest was the latest to occur in an initiative launched by the FBI in 2007 against hedge fund cheats.

"The conduct alleged is not an inadvertent slip of the tongue by Mr. Gupta," she said. "His eagerness to pass along inside information to Rajaratnam is nowhere more starkly evident than in the two instances where a total of 39 seconds elapsed between his learning of crucial Goldman Sachs information and lavishing it on his good friend."

Gupta's lawyer, Gary P. Naftalis, said in a statement Wednesday that his client only had legitimate communications with Rajaratnam.

"The government's allegations are totally baseless," he said. "The facts in this case demonstrate that Mr. Gupta is innocent of any of these charges and that he has always acted with honesty and integrity. ... We are confident that these accusations — which are based entirely on circumstantial evidence — cannot withstand scrutiny and that Mr. Gupta will be completely exonerated of any wrongdoing."

Aside from being a former director of the Wall Street powerhouse Goldman Sachs, Gupta is the former chief of McKinsey & Co., a highly regarded global consulting firm that zealously guards its reputation for discretion and integrity.

Gupta was also a former director of the huge consumer products company Procter & Gamble Co., a pillar of American industry and one of the 30 companies that make up the Dow Jones industrial average. P&G owns many well-known brands including Bounty, Tide, and Pringles.

The Indian-born defendant's name played prominently at the criminal trial earlier this year of Rajaratnam, who was convicted after prosecutors used a trove of wiretaps on which he could be heard coaxing a crew of corporate tipsters into giving him an illegal edge on blockbuster trades.

Jurors heard testimony that at an Oct. 23, 2008, Goldman board meeting, members were told that the investment bank was facing a quarterly loss for the first time since it had gone public in 1999.

Prosecutors produced phone records showing Gupta called Rajaratnam 23 seconds after the meeting ended, causing Rajaratnam to sell his entire position in Goldman the next morning and save millions of dollars.

Rajaratnam also earned close to $1 million when Gupta told him that Goldman had received an offer from Warren Buffett's Berkshire Hathaway to invest $5 billion in the banking giant, prosecutors said.

In one tape played at trial, Rajaratnam could be heard grilling Gupta about whether the Goldman Sachs board had discussed acquiring a commercial bank or an insurance company.

"Have you heard anything along that line?" Rajaratnam asked Gupta.

"Yeah," Gupta responded. "This was a big discussion at the board meeting."

Prosecutors sought to maximize the impact of the Gupta tape by calling Goldman Sachs chairman Lloyd Blankfein to testify that the phone call violated the investment bank's confidentiality policies.

Rajaratnam was sentenced earlier this month to 11 years in prison.

Why are U.S. gas prices so high? Not for the reason Biden thinks
View CBS News In
CBS News App Open
Chrome Safari Continue
Be the first to know
Get browser notifications for breaking news, live events, and exclusive reporting.