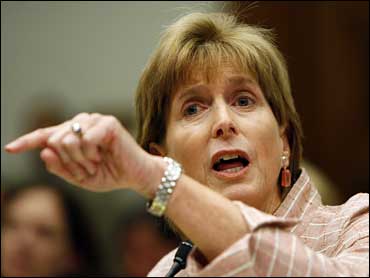 Ex-EPA chief Christie Whitman was bombarded by boos and a host of accusations Monday at a hearing into her assurances that it had been safe to breathe the air around the fallen World Trade Center.

The confrontation between the former head of the Environmental Protection Agency and her critics grew heated at times. Some members of the audience shouted in anger, only to be gaveled down by Rep. Jerrold Nadler, D-N.Y., who chaired the hearing.

"The administration has continued to make false, misleading and inaccurate statements, and refused to take remedial actions, even in the face of overwhelming evidence," said Nadler, whose district includes the World Trade Center site.

For three hours Whitman faced charges from Nadler and others that the Environmental Protection Agency's public statements after the Sept. 11, 2001, attacks gave people a false sense of safety.

Whitman maintained the government warned those working on the toxic debris pile to use respirators, while elsewhere in lower Manhattan the air was safe to the general public.

"There are indeed people to blame. They are the terrorists who attacked the United States, not the men and women at all levels of government who worked heroically to protect and defend this country," Whitman said.

Since the attacks, independent government reviews have faulted the EPA's handling of the immediate aftermath and the agency's long-term cleanup program for nearby buildings.

Read more about the health crisis stemming from 9/11.

A study of more than 20,000 people by Mount Sinai Medical Center in New York concluded that, since the attacks, 70 percent of ground zero workers have suffered some sort of respiratory illness. A separate study released last month found that rescue workers and firefighters contracted sarcoidosis, a serious lung-scarring disease, at a rate more than five times as high as in the years before the attacks.

John Sferazo sat in on the hearing, reports CBS News national correspondent Byron Pitts. He is one of the thousands from around the country who volunteered at groud zero and suffers with a severe respiratory problem today.

"I came here with a very open mind, hoping to at least hear an apology," Sferazo said.

But Whitman never apologized, Pitts repoprts. The hearing never got much beyond finger pointing.

Nadler, a Democrat whose district includes the World Trade Center site, called the hearing after years of criticizing federal officials for what he says was a negligent and incomplete cleanup.

Her responses were mostly calm and deliberate. But under questioning from Rep. Keith Ellison, D-Minn., Whitman angrily raised her voice, saying she based her statements on "what I was hearing from professionals," not the whims of politicians.

Whitman pointed out that her son was in the World Trade Center complex that day, "and I almost lost him," at which point Ellison said he would not "stand here and allow you to try to obfuscate."

"I'm not obfuscating," Whitman shot back. "I have been called a liar even in this room today."

She has long insisted that her statements that the "air is safe" were aimed at those living and working near ground zero, not those who actually toiled on the toxic pile that included asbestos.

"Was it wrong to try get the city back on its feet as quickly as possible in the safest way possible? Absolutely not," she said, drawing catcalls from the crowd.

Dozens of activists and Sept. 11 rescue workers came to the hearing, and some in the audience hissed when Whitman said she felt former Mayor Rudy Giuliani's administration "did absolutely everything in its power to do what was right" in handling the health concerns.

Rep. Trent Franks, R-Ariz., the ranking Republican on the House Judiciary subcommittee, said he worried that assigning blame to Whitman could mean, in future crises, that "officials might default to silence."