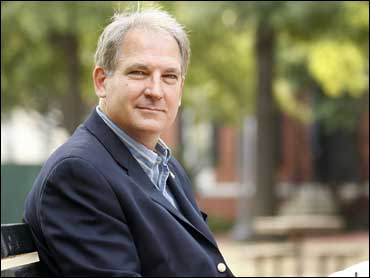 A former aide to President Bush filed a copyright lawsuit over the Kevin Costner and Kelsey Grammer movie "Swing Vote" on Thursday, claiming elements of its plot and marketing were stolen from him.

Political commentator Bradley Blakeman, a former deputy assistant to Bush for appointments and scheduling, claimed in the lawsuit that he gave a copyrighted screenplay entitled "Go November" to Grammer in 2006.

The lawsuit, filed in federal court on Long Island, claims Grammer agreed to develop the project and star as an incumbent Republican president but ended up portraying a similar role in "Swing Vote," which was released Aug. 1.

A spokesman for Grammer and his production company, both named in the lawsuit, dismissed the claims as "frivolous" and a "waste of time."

"I am not sure why Kelsey was even named in this suit," spokesman Stan Rosenfield wrote in an e-mail. "He was an actor who signed on to the project AFTER the script was written."

Blakeman's lawsuit paints a different picture, claiming the former "Cheers" and "Frasier" actor told him to consult a producer who later told him repeatedly that they were interviewing potential screenwriters and planned to go ahead with the project.

The lawsuit claims Blakeman's screenplay shared a basic premise with "Swing Vote," although it focused on an election hinging on multiple swing voters instead of one swing voter.

Blakeman claims "Swing Vote" incorporated other elements that he proposed, including: the timing of the film's release, the use of real-life newscasters as actors playing themselves, the use of dirty tricks by both major political parties, marketing strategies and other plot points.

"Essentially, except for the character names and the relationship developed between the main characters played by defendant Kevin Costner and his daughter, the entire concept of 'Swing Vote' ... was taken from the copyrighted work," Blakeman's lawsuit claims.

The Walt Disney Co. is named as a defendant in the suit, as is Walt Disney Motion Pictures Group Inc. and Disney division Touchstone Pictures, which distributed "Swing Vote." Costner and the writers of "Swing Vote" also are among those named.

Spokeswomen for Disney and for distributor Treehouse Films said they hadn't seen the lawsuit and wouldn't comment. A spokesman for Costner, who helped finance the movie, said the "Dances with Wolves" and "Field of Dreams" actor was on vacation and couldn't be reached.

Blakeman, who has appeared on cable television news shows as a commentator, is the former president of Freedom's Watch, a group that has presented itself as the conservative alternative to liberal organizations such as MoveOn.org. His lawsuit seeks unspecified damages.

Grammer was hospitalized in New York this month after feeling faint while on a trip to promote "Swing Vote," which co-stars Paula Patton and Stanley Tucci. He had suffered a mild heart attack two months earlier while paddle-boating in Hawaii with his wife, and his publicist said it was possible his medication had led to his symptoms.