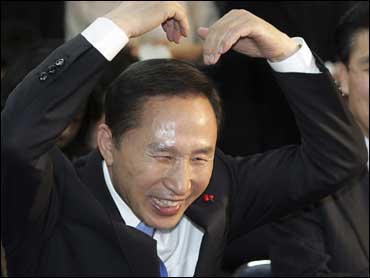 Lee Myung-bak won South Korea's presidential election Wednesday by a landslide, according to exit polls and media predictions, as voters overlooked fraud allegations in hopes the former Hyundai CEO will revive the economy.

Lee of the conservative Grand National Party received 50.3 percent of the vote, according to an exit poll sponsored by TV stations KBS and MBC. The next closest candidate, liberal Chung Dong-young, had 26 percent, and independent Lee Hoi-chang was third with 13.5 percent.

The poll of 70,000 people had a margin of error of plus or minus 1 percentage point.

The results were similar to an exit poll by TV station SBS that had Lee winning with 51.3 percent of the vote. YTN news channel's exit poll put Lee on top with 49 percent.

Based on their own prediction system, and taking into account exit polls and early returns, the main public broadcaster KBS said Lee was "sure to win."

With 23.7 percent of the vote counted, Lee was leading with 46.3 percent to Chung's 28.3 percent, according to the National Election Commission.

Lee, a former Seoul mayor who turned 66 on election day, has led the race for months. His victory ends a decade of liberal rule in the South, during which the country embarked on unprecedented reconciliation with rival North Korea that has led to restored trade and travel across the heavily armed frontier dividing the peninsula.

Lee has pledged to take a more critical view of Seoul's engagement with rival North Korea and seek closer U.S. ties. Efforts to end North Korea's nuclear weapons ambitions stand at a critical juncture, with the communist country set to disclose all its programs for eventual dismantlement by a year-end deadline.

Election turnout was a record low 62.9 percent of the 37 million eligible voters, the election commission said, a decline from 70.8 percent at the last poll in 2002. The election was the fifth since the direct presidential ballot was restored in 1987 following a wave of democratization that ended years of authoritarian military rule.

Just days before the vote, the parliament voted to authorize an independent counsel investigation into Lee in a stock manipulation case where prosecutors had already cleared him of wrongdoing. The counsel is to complete the probe before the Feb. 25 inauguration, and Lee has said he would step aside from the presidency if found at fault.

"I want to thank the people who have defended me from numerous negative campaigns," Lee told reporters Wednesday morning after voting in Seoul.

Hundreds of supporters watching results on a giant TV in front of the Grand National Party's headquarters burst into song Wednesday evening as Lee's apparent victory was announced.

"I am very happy and it is like retaking democracy after a decade" of liberal rule, said Park Mi-won, a housewife in her 50s.

"I hope he would uphold the people's yearning for a change in government and correct what the outgoing government has done wrong in the past," he told reporters.

Unlike previous elections dominated by issues like security policy with rival North Korea or relations with the United States, this year voters were focused on economic matters due to concern over sky-high real estate prices, soaring unemployment and a widening gap between rich and poor.

Nicknamed "The Bulldozer" for his get-the-job-done business acumen, Lee's support has been bolstered due to dissatisfaction over the five-year term of liberal President Roh Moo-hyun, who was constitutionally barred from seeking re-election.

In 2002, Roh was elected after pledging not to "kowtow" to the U.S. while also continuing the rapprochement with the North fostered by his predecessor and fellow liberal Kim Dae-jung, who won a Nobel Peace Prize for his "sunshine" policy of engagement with Pyongyang.

Lee has made the economy central to his campaign, pledging to raise annual growth to 7 percent, double the country's per capita income to US$40,000 and lift South Korea to among the world's top seven economies - known as his "747" pledge.

Lee first gained prominence as head of Hyundai's construction unit that symbolized South Korea's meteoric economic rise in the 1960-70s. As Seoul mayor from 2002-2006, he made his mark by opening up a long-paved-over stream to create a new landmark in the capital that also earned him environmental credibility.

Lee's march to the presidency hit a bump this week when a video was released by his liberal rivals showing him saying in 2000 that he founded a firm implicated in fraud. Although he had admitted the same in printed interviews, the video put the words directly into his mouth.

The case revolves around a Korean-American former business associate of Lee's who faces charges for stock manipulation, embezzlement and forgery after his extradition from the U.S., where he allegedly fled with millions of dollars (euros).

Lee has said the taped comments were taken out of context and denied the allegations.

Analysts say the independent counsel investigation will hound Lee after the election as he would be the country's first president-elect to undergo a criminal probe. By South Korean law, a president-elect can be prosecuted but receives immunity from most criminal lawsuits after inauguration.