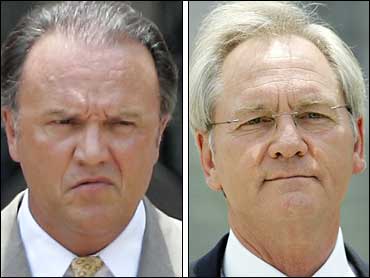 Scrushy, who once ran the Birmingham-based chain of rehabilitation clinics, was accused of arranging $500,000 in donations to Siegelman's campaign for a state lottery in exchange for a seat on a state hospital regulatory board.

The case was tried as Siegelman sought the Democratic nomination for governor, and the trial put him in court during the final weeks of the campaign. He lost to Lt. Gov. Lucy Baxley in the June 6 Democratic primary and blamed the charges for his defeat.

Siegelman and Scrushy sat on the edge of their seats but showed no emotion as the verdict was read. The governor's former chief of staff, who was acquitted, bowed his head and nodded "thank you" to the jury.

Federal Judge Mark Fuller allowed Siegelman and Scrushy to remain free on an undisclosed amount of bond. He did not set a sentencing date.

"If I'm really guilty of this, then every other person in public office ought to look out because everybody is raising money and putting people on boards and commissions," Siegelman said, predicting the verdict would be overturned on appeal.

The most serious of the charges are punishable by up to 20 years in prison and $250,000 in fines.

Authorities described a "pay-to-play" scheme in which campaign donations were necessary to participate in government projects. Prosecutor Louis Franklin said the verdict should send a message to the political world: "You shouldn't take bribes. You shouldn't trade on your office."

But defense attorneys said the case was based on the testimony of former Siegelman aide Nick Bailey and lobbyist Lanny Young, whom they called "scam artists," accusing the two of lying on the witness stand in hopes of getting light sentences for their guilty pleas.

Another key witness, toll bridge developer Jim Allen, testified that he met with Siegelman during his 1998 campaign for governor, and Siegelman initially asked him for a $100,000 donation. According to Allen, Siegelman later said, "If you would give me $40,000, I'll let you pick the next highway director."

Siegelman appointed to the position a man who had previously worked for Allen. Prosecutors said that man, Mack Roberts, gave favorable treatment to projects that would benefit his former boss.

Prosecutors claimed Siegelman and his chief of staff, Paul Hamrick, received gifts, including a Honda motorcycle for the governor that he allegedly tried to conceal from investigators. Hamrick reportedly received $25,000 for a new luxury BMW automobile.

Hamrick and Roberts were acquitted on all charges.

Siegelman and Hamrick went on trial in 2004 in Tuscaloosa in a Medicaid fraud case, but those allegations were dropped after a federal judge ruled prosecutors had insufficient evidence to support a key conspiracy charge.

Emerging from the courthouse Thursday, Hamrick referred to the Tuscaloosa case and said, "I hope the harassment has stopped."

Thursday's verdict dealt a serious blow to any future political ambitions for Siegelman, a prominent Democrat who was elected secretary of state, attorney general and lieutenant governor before winning the state's top office in 1998.

The monthlong trial also came one year after Scrushy was acquitted of criminal charges in a massive accounting fraud scandal at his former company in Birmingham.

The jury in Montgomery returned the verdicts after 11 days of deliberations, convicting Siegelman and Scrushy of bribery, conspiracy and fraud. Siegelman was also convicted of obstruction of justice, but was acquitted on 25 other counts, including racketeering and extortion.

Scrushy remains a defendant in major civil cases involving allegations of a $2.7 billion accounting scam at the rehabilitation chain he once ran.