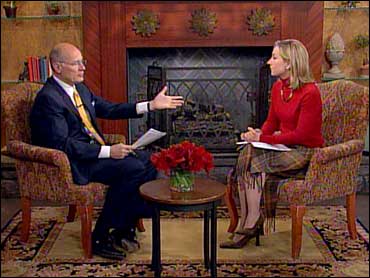 When people discuss biological clocks, they're likely to be referring to women.

But, reported The Early Show medical correspondent Dr. Emily Senay Monday, evidence is mounting that men have one, too.

She summarized it for co-anchor Harry Smith by saying, "Male menopause, no. A biological clock, probably yes.

"There's no timeframe after which men no longer make sperm the way women go through menopause and they cease to be fertile at all. But, I think a lot of men assume that because they make sperm throughout their lives that they have the equal ability to conceive healthy children in their 70s, or even beyond in some cases, as they do in their 20s and 30s. And the science is really starting to build and mount that that's just not the case."

There's evidence, Senay pointed out, that age can make it harder for men to produce sperm that's able to conceive a child. And perhaps more importantly, various studies have suggested that the risk of birth defects rises the older the father is.

A fairly recent study suggested that men over 40 are nearly six times more likely to father an autistic child than men under 30. Schizophrenia may also be more prevalent in children fathered by older men. A link between the mother's age and Down syndrome has long been suspected.

But recently the father's age has also been made a part of that equation, with what appears to be added risk if both father and mother are older. Several conditions whose most prominent symptom is a deformity of the facial bones also appear to be correlated with the age of the father at conception.

"Many researchers are quite convinced that this is something more men need to think about as they're doing their family planning," Senay stressed.

What could be at work producing that effect in men?

One explanation offered by fertility experts, Senay noted, involves the genetic makeup of a man's sperm. The cells that create a man's sperm divide roughly once every 16 days. By the time the man is 50, that division has occurred more than 800 times in his life. Those cells determine the genetic code that will be in the sperm. And, every time they divide, there's a chance that the genetic code will be altered. With every alteration comes a greater chance of genetic deterioration that could open the door to birth defects.

It takes only 24 cell divisions in a woman's body to produce her lifetime supply of eggs, and those divisions occur before the woman is even born. That may provide more genetic stability for the eggs than for the sperm.

With age, Senay added, a man's body can produce less testosterone. And that in turn can reduce sperm count and the quality of sperm, including its ability to trigger a pregnancy. And sexual performance can also decline with age.

"Men lose about 1 percent of testosterone a year, that's completely normal, as they get older," Senay said. "So, the number of sperm and quality of sperm go down as they get older. This is something I think we're gonna hear a lot more about."

Senay observed that the notion of a male biological clock isn't as new as many people think.

A leading researcher in the field says basic knowledge of age-related changes in men's sperm goes back to the 1950s. She says it's intriguing that society chooses to ignore this information.

Senay herself told Smith, "I think there's a resistance, if you will, or even a measure of denial."

Perhaps we're now beginning to ignore it less, Senay suggests. And, with couples having children later in life than they did in the past, a little more awareness is a good thing, especially when it comes to asking your doctor the right questions about potential difficulties.