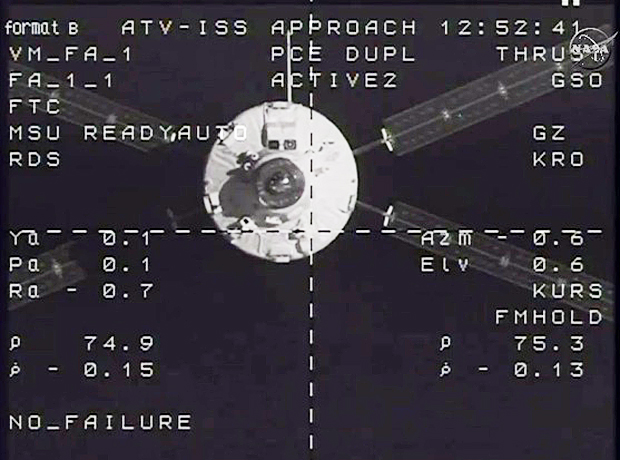 Launched July 29 from Kourou, French Guiana, aboard a powerful Ariane 5 rocket, the Automated Transfer Vehicle, or ATV-5, docked at the aft port of the Russian Zvezda command module at 9:30 a.m. EDT as the two spacecraft sailed 260 miles above southern Kazakhstan. The cargo ship, named after the Belgian priest and astrophysicist Georges Lemaitre, will remain attached to the station until early next year.

European Space Agency astronaut Alexander Gerst and cosmonaut Alexander Skvortsov were standing by in the Russian command module to intervene if any problems developed, but the big cargo ship carried out a picture-perfect autonomous approach, using a sophisticated laser guidance system to home in on the space station.

ATV-5 is loaded with 5,910 pounds of dry cargo, including crew supplies, spare parts and research gear. It also carries 1,858 pounds of water, three tanks of oxygen and air totaling 220 pounds, 4,670 pounds of propellant that will be used by the ATV's rocket engines to change the station's orbit as required during the cargo ship's stay, along with 1,900 pounds of fuel that will be pumped aboard for use by the station's Russian thrusters.

Gerst will serve as loadmaster aboard the space station, overseeing the transfer of dry cargo into the lab complex. The astronauts plan to open hatches between the ATV and the space station Wednesday, carrying out routine procedures to clean the air inside the supply ship before unloading begins Thursday.

"It's a big event for us," Gerst said last week during an interview with CBS News. "A lot of scientific experiments are in there that I will be actually assembling in the European Columbus module that (will produce) a lot of scientific results that we can bring back for the benefit of all humans, new materials, new science.

"But also, we have a lot of food in that vehicle, we have new clothes, so there are a lot of reasons for an astronaut to look forward to a vehicle like ATV-5."

For its last mission, the ATV was packed with a record load of hardware and supplies. Science gear includes the European Space Agency's 882-pound Electromagnetic Levitator, designed to suspend various metals in weightlessness, heat them to nearly 3,000 degrees Fahrenheit and then quickly cool the samples to learn more about the structure and behavior of such materials.

"Blacksmiths have been using this technique for centuries, creating steel tools and weapons by heating, hammering and quenching in water," ESA said in a web description. "This process sets the steel's structure and causes it to be hard and stay sharp.

"Understanding the underlying physics of this simple example is complicated and factors such as gravity and the mould used to hold the metal in place influence the process making it difficult to get to the fundamentals. ... For scientists, observing liquid metals cooling in weightlessness removes unnecessary complexity to reveal the core processes."

Also on board the ATV are a pump for the station's water recycling system and an experimental joystick known as Haptics-1, described by ESA as a "touchy-feely joystick, which will investigate how people feel tactile feedback in space, preparing for remote robotic operations from orbit."

The ATV docking kicks off a busy week aboard the space station with the start of cargo transfers and the unberthing Friday of a commercial Orbital Sciences Cygnus cargo ship attached to the Earth-facing port of the forward Harmony module. Skvortsov and Oleg Artemyev then plan to carry out a spacewalk Monday to launch a small "nanosatellite" and to retrieve science gear attached to Zvezda's hull.