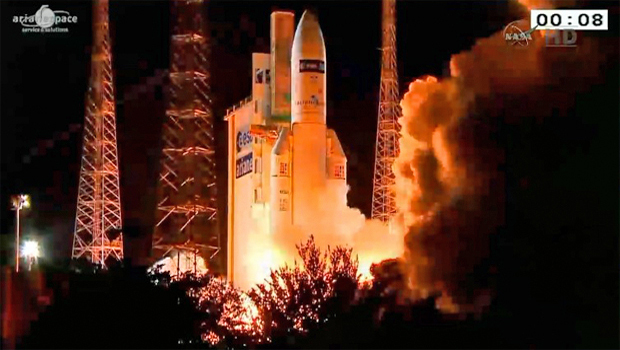 A powerful Ariane 5 rocket carrying the European Space Agency's fifth and final Automated Transfer Vehicle cargo ship roared to life and climbed away from French Guiana Tuesday, kicking off a two-week flight to deliver more than seven tons of equipment and supplies -- including cappuccino and tiramisu -- to the International Space Station.

Shattering the overnight calm at the Guiana Space Center, the Ariane 5's hydrogen-fueled Vulcain first stage engine ignited with a flash at 7:47 p.m. EDT (GMT-4), throttling up to full power an instant before a pair of large solid-fuel boosters ignited with a rush of exhaust.

The towering rocket quickly climbed away from its launching stand on the northeast coast of South America, arcing out over the Atlantic Ocean into the plane of the space station's orbit.

The ascent appeared to go smoothly, with the strap-on boosters falling away as planned two minutes and 24 seconds after launch. Six-and-a-half minutes after that, the Ariane 5 first stage fell away and the rocket continued the climb to space on the power of its single second-stage Aestus engine.

The second stage shut down 17 minutes after launch, putting the spacecraft into a preliminary parking orbit. A second, shorter firing was executed 42 minutes later to establish a circular 162-mile-high orbit, about 100 miles below the space station.

The ATV-5 spacecraft, named after the Belgian priest and astrophysicist Georges Lemaitre, then was released from the Ariane 5's second stage about one hour after liftoff to complete the launch phase of the mission, the 60th success in a row for the Ariane 5. The ATV's solar arrays unfolded and locked in place about a half hour after separation.

"The last of the litter is now in orbit," said ESA Director General Jean-Jacques Dordain. "The ATV, Georges Lemaitre, is doing well."

The flight plan calls for the cargo ship to execute a series of carefully planned rocket firings to catch up with the space station, flying below the outpost before looping up and over, dropping back to a point directly behind and below the lab complex. From there, the spacecraft will move in for docking at the aft port of the Zvezda command module around 9:30 a.m. on Aug. 12.

The ATV-5 vehicle is the heaviest payload ever launched by an Ariane 5, the European Space Agency's fifth and final station cargo flight. Station resupply now will depend solely on Russian Progress spacecraft, Japanese HTV cargo ships and commercial freighters built for NASA by SpaceX and Orbital Sciences Corp.

ESA, which supplied the station's Columbus laboratory module, is looking ahead to development of power, propulsion and life support systems that will be used by NASA's Orion deep space exploration vehicle.

"It's really a great achievement," Eric Beranger, director of space programs for ATV-builder Airbus Defence and Space, said of the cargo craft. "It's the best we've ever launched. It's the last, but at the same time it's a beginning, because it is also preparing for the future Orion missions where we will provide the service module."

ESA's partnership with NASA on the Multi-Purpose Crew Vehicle -- Orion -- "will be the first time ever Europe and Airbus are providing a critical system to a U.S. human spaceflight rated capsule," Beranger said. "We will provide propulsion, energy and life support, which is absolutely key for human spaceflight. It's both an au revoir and the beginning of a new adventure."

Bart Reijnens, in charge of orbital systems and space exploration at Airbus Defence and Space, said preparing the ATV for the program's final flight brought mixed emotions after three decades of planning and development.

"it's not easy to say farewell to ATV," he told reporters before launch. "You can be sure about that. The pain is much less because at the same time, European member states, together with NASA, have taken a commitment to jointly go for MPCV/Orion. This is our next challenge, and our engineers want to have a challenge."

Asked how much the knowledge and experienced gained building and flying the ATV will play into Orion, Reijnens said "it's huge. To say it very bluntly, if Europe had not done ATV, the service module for MPCV would have been a no go."

Thomas Reiter, a space station veteran who now serves as director ESA's human spaceflight program, said his agency's commitment to Orion demonstrates "that all the effort we have taken to build such a fantastic vehicle to do cargo transfer and automated docking is not lost, but it's built upon for future activities."

The ATV-5 is loaded with 5,941 pounds of dry cargo, including crew supplies, spare parts and research gear, 1,858 pounds of water, three tanks of oxygen and air totaling 220 pounds, 4,669 pounds of propellant that will be used for station maneuvers and 1,896 pounds of fuel that will be pumped aboard for use by the station's Russian thrusters.

ESA astronaut Alexander Gerst will serve as loadmaster aboard the station, coordinating the transfer of dry cargo into the the lab complex and overseeing the ATV's reloading with trash and no-longer-needed equipment.

Among the cargo bound for the station is the European Space Agency's Electromagnetic Levitator, an 882-pound research apparatus designed to suspend various metals in weightlessness, heat them to nearly 3,000 degrees Fahrenheit and then rapidly cool the samples.

"Blacksmiths have been using this technique for centuries, creating steel tools and weapons by heating, hammering and quenching in water," ESA said in a web description. "This process sets the steel's structure and causes it to be hard and stay sharp.

"Understanding the underlying physics of this simple example is complicated and factors such as gravity and the mould used to hold the metal in place influence the process making it difficult to get to the fundamentals. ... For scientists, observing liquid metals cooling in weightlessness removes unnecessary complexity to reveal the core processes."

The experiments will be conducted by Gerst in ESA's Columbus research module.

Also on board the ATV are a pump for the station's water recycling system and an experimental joystick known as Haptics-1, described by ESA as a "touchy-feely joystick, which will investigate how people feel tactile feedback in space, preparing for remote robotic operations from orbit."

ATV-5 is expected to remain attached to the station until Jan. 25. After undocking, it will carry out one final engineering experiment during its catastrophic plunge back into the atmosphere. The spacecraft is carrying an infrared camera that will document the breakup from inside.

NASA and the Japanese space agency have flown similar instruments, but the break-up camera, or BUC, is a first for ESA.

"The infrared camera, bolted to an ATV rack, will burn up with the rest of the spacecraft, but imagery of the final 20 seconds will be passed to the Re-entry SatCom, a spherical capsule protected by a ceramic heat shield," ESA wrote in a web description.

After the ATV breaks up, the Re-Entry SatComn will transmit its stored data to an Iridium communications satellite for relay back to engineers on the ground. The goal is to learn more about the forces spacecraft are subjected to during atmospheric entry and how various systems respond.