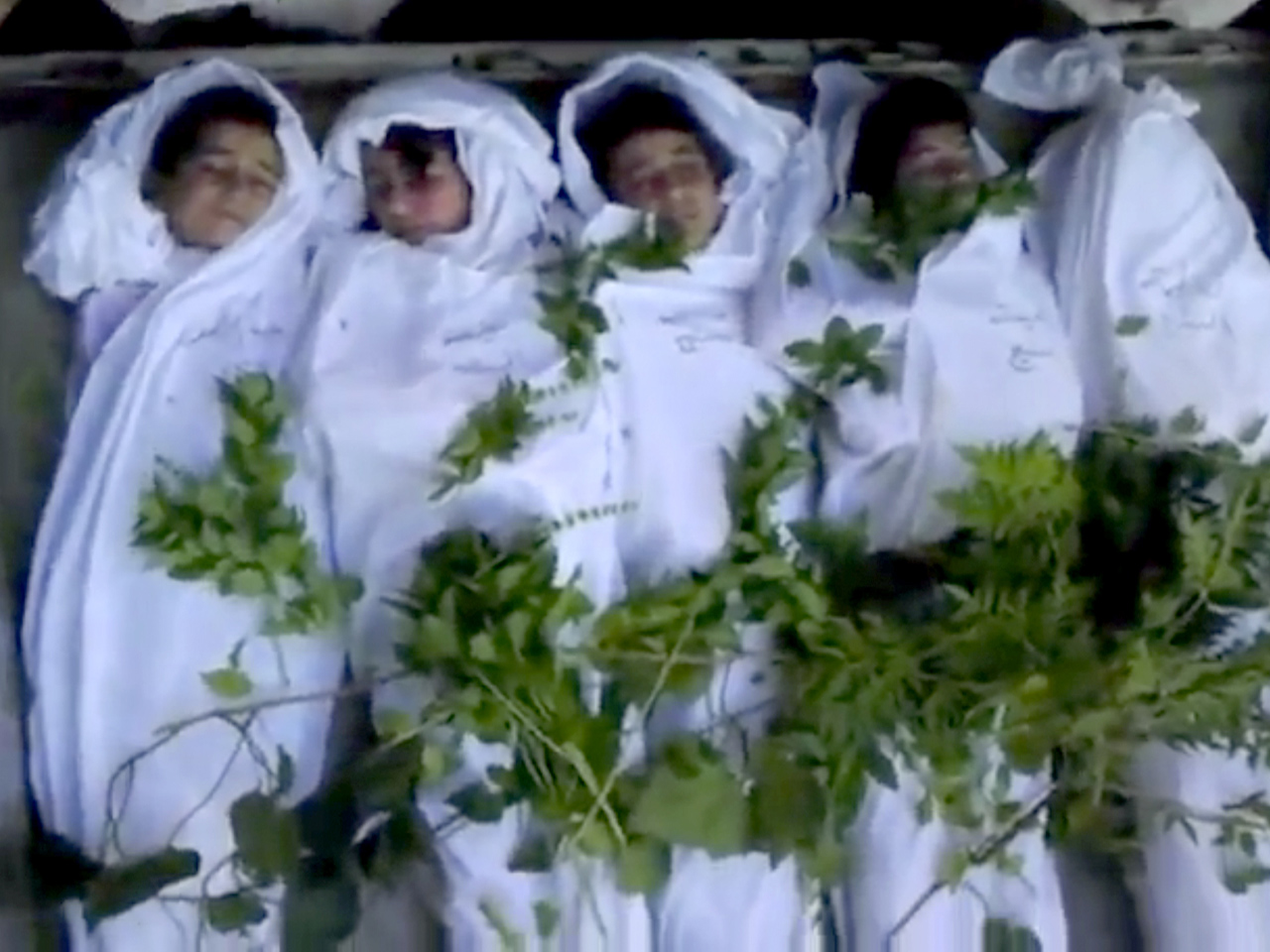 (AP) BEIRUT - Syrian troops backed by tanks and helicopters broke into a Damascus suburb on Thursday following two days of shelling and intense clashes as part of a widening offensive by President Bashar Assad's forces to seize control of parts of the capital and surrounding areas from rebel fighters, activists said.

At least 15 people were killed in the offensive on Daraya, only a few kilometers southwest of Damascus.

Across the country, at least 100 people died in shelling and clashes, according to the Britain-based Syrian Observatory for Human Rights and the Local Coordination Committees.

The bloodshed coincided with the departure from the Syrian capital of the last of the United Nations military observers after their mission failed. The mission was part of a six-point peace plan by outgoing envoy Kofi Annan.

As the country slides deeper into civil war, activist groups now routinely report the deaths of anywhere between 100 and 250 people on a daily basis, but it is virtually impossible to verify these figures.

Residents of Damascus said troops were bombing Daraya and nearby Moadamiyeh from the Qasioun mountain overlooking Damascus.

"It's just another regular day in Damascus," said a resident of the city of 1.7 million, who spoke on condition of anonymity for fear of reprisals. "I woke up to the sound of explosions and it hasn't stopped since."

In the eastern part of the country, Syrian rebels waged fierce battles with regime troops in the town of al-Bukamal, which is located across the border from the Iraqi town of Qaim.

The border crossing has been in rebel hands since last month, but wresting control of al-Bukamal itself from regime troops would expand the opposition foothold along the frontier.

The opposition already controls a wide swath of territory along the border with Turkey in the north, as well as pockets along the frontier with Jordan to the south and Lebanon to the west. Together, they have proven key in ferrying people and supplies into and out of the country.

Rebels have been fighting troops for days in al-Bukamal but early Thursday took over several checkpoints, the main police station and the local command of the Political Security Directorate, one of Syria's powerful intelligence agencies, according to Rami Abdul-Rahman, who heads the Observatory.

"There is an attempt to take full control of al-Bukamal," Abdul-Rahman said.

The Local Coordination Committees said warplanes bombed al-Bukamal, but Abdul-Rahman said the jets were flying over the town and struck nearby areas, not the town itself.

Abu-Omar al-Deery, an activist in the provincial capital of Deir el-Zour, said by telephone that there are "fierce battles" in al-Bukamal and that "the Free Syrian Army is trying to liberate and clean the city."

The seemingly intractable conflict in Syria has defied all attempts at mediation. Human rights groups say more than 20,000 people have been killed since the uprising against President Bashar Assad began in March 2011. In the past month the fighting has spread from the country's smaller towns and cities to the regime strongholds of Damascus and Aleppo.

Annan announced earlier this month that he will resign on Aug. 31. He is to be replaced by veteran diplomat Lakhdar Brahimi on Sept. 1.

In Damascus, Deputy Foreign Minister Faysal Mekdad said Syrian officials were "looking forward" to working with Brahimi but said the crisis would continue as long as foreign countries were interfering.

"I think this should stop, and Turkey should stop playing this role," he said. The Syrian regime refers to the rebels as terrorists.

Turkey - once an ally of Syria - has emerged as one of Assad's fiercest critics and taken in some 44,000 refugees from the Arab state.

Mekdad also denied rebel claims that a Japanese journalist who died in the northern city of Aleppo this week was killed by government troops.

"Any journalist who behaves in an irresponsible way should expect all these difficult possibilities," he said following a meeting with Babacare Gaye, the head of the outgoing U.N. mission.

Veteran Japanese war correspondent Mika Yamamoto was killed on Monday, becoming the first foreign journalist to die in Aleppo since clashes between rebels and regime forces erupted there almost a month ago.

Rebels have said she was killed by regime forces. Japan's Foreign Ministry said she was hit by gunfire while traveling with rebels from the Free Syrian Army.

Mekdad said Yamamoto was killed by "armed groups" to frame the Syrian army.

The main battle fronts over the past month have been in the capital, Damascus, as well as Aleppo, where regime forces have struggled to stamp out a rebel offensive that began last month and succeeded in capturing several neighborhoods in the city of 3 million people.

The human rights group said that during a 10-day, fact-finding visit to Aleppo in the first half of August, it found that some 30 attacks killed more than 80 civilians and wounded many more.

Amnesty said that among the dead were 10 members of one family, seven of them children. Their home was destroyed in two airstrikes on Aug. 6. It said bodies of mostly young men, most of them handcuffed and shot in the head, have been frequently found near the local headquarters of the powerful Air Force Intelligence, which is in a government-controlled area.

The uprising against Assad's regime began with largely peaceful protests but has since morphed into a civil war that has spread to almost all areas of the country.

In Daraya, the Local Coordination Committees said the government shelling killed a mother and her five children, all members of the al-Sheik family who had fled their hometown of Maadamiyeh to escape the violence.

An amateur video showed the five children draped in white shrouds with their faces showing during the funeral. The body of the mother was covered.