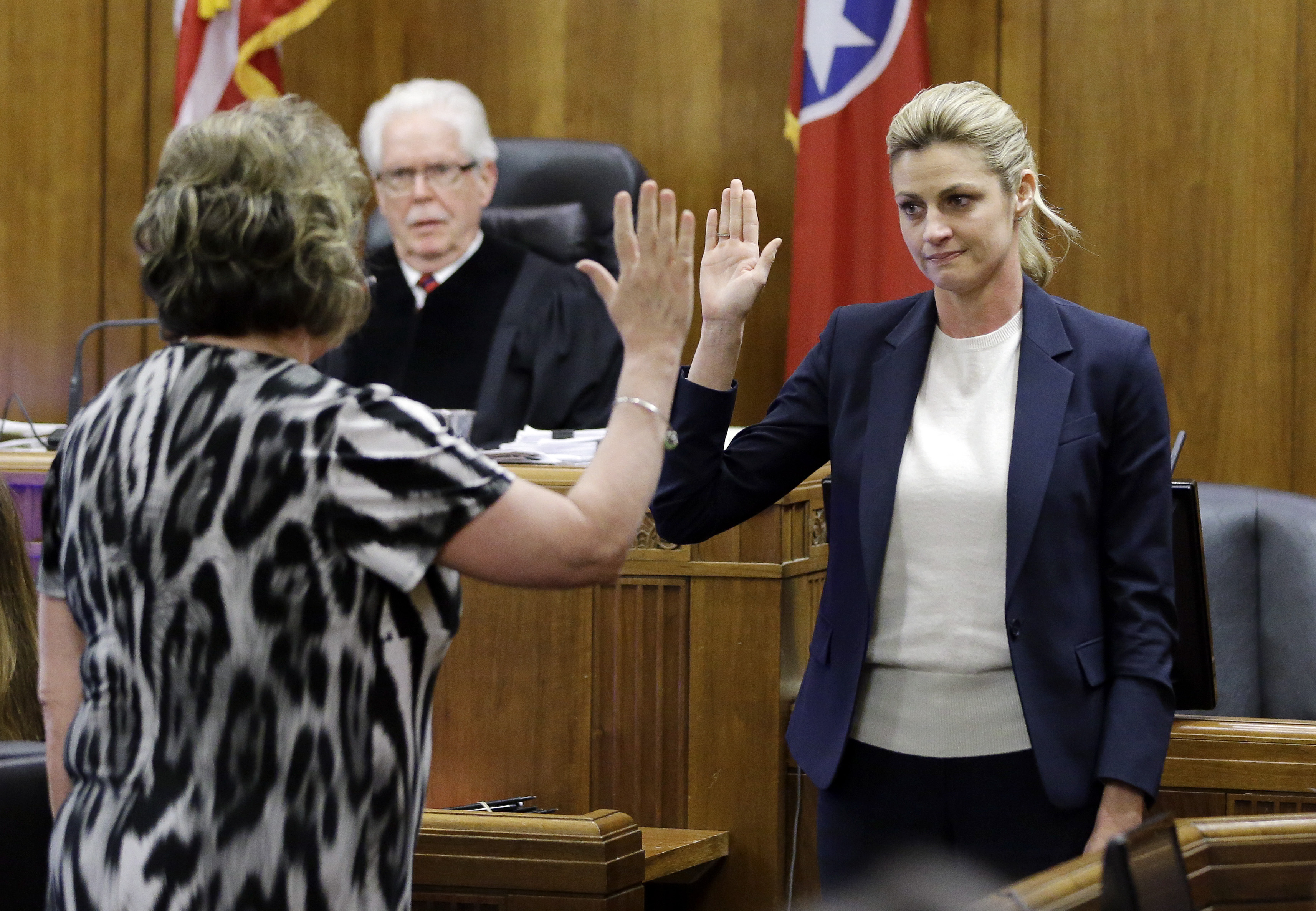 NASHVILLE, Tenn. -- Sportscaster and TV host Erin Andrews testified Tuesday that her career has thrived since a stalker took nude videos of her and posted them on the Internet, but she doesn't think she'll ever get over the emotional fallout.

Andrews has been on the witness stand for two days, often giving tearful testimony about the fear and suffering she has gone through as a result of the stalking and the videos.

She has filed a $75 million lawsuit against her stalker and the owner and operator of the Nashville Marriott at Vanderbilt. The hotel is a franchise.

A defense attorney for the companies told Andrews that they both agreed she was a victim of a crime. But during cross-examination, attorney Marc Dedman asked her about her career success since she discovered in July 2009 that someone put the secretly-shot videos of her online.

Andrews acknowledged that she has moved on to Fox Sports, making more money than she did at ESPN and is now hosting the show "Dancing with the Stars."

The defense presented an ESPN executive, who testified via video that he did not notice any problems with her work after the discovery of the nude videos. In fact, Patrick Donaher, who was senior director of talent, planning and development for the network while Andrews was there, said she did a good job covering games and improved before she left for Fox in 2012.

Dedman noted that, in addition, Andrews has endorsed Reebok, Degree antiperspirant, Florida orange juice and a slew of other companies, as well as appeared in a commercial for Victoria Secret -- one where she was fully clothed -- and worked the red carpet and hosted the CMT Awards.

"You have done very well in your career since 2009?" Dedman asked.

Andrews said she has thrown herself into her career just to feel normal but remains anxious and depressed. She also said it ripped her apart when some in the media thought the nude videos were part of a publicity stunt before Barrett was arrested.

She also talked about her reluctance to date after the videos were posted and her relationship with boyfriend Jarret Stoll, a professional hockey player who plays for the Minnesota Wild.

"I feel sad because I think he would have loved the girl more who was there before this happened," Andrews said tearfully. "And I feel guilty about that."

Barrett was sentenced to 2 1/2 years in prison after he admitted to stalking Andrews in three different cities, altering hotel room peepholes and shooting nude videos of her in Nashville and Columbus, Ohio.

Barrett testified Monday, in videotaped deposition, that he removed the hotel door peepholes and altered them so he could pull them out easily to place his cellphone up to the empty hole and shoot videos.

Andrews said to this day she remains on guard every time she stays in a hotel during her extensive business travels.

When she checks in, she immediately asks to change rooms in the hotel, she said. She said she refuses to let anyone inside the room, and sweeps it for cameras and "booby traps."

She said she is taunted daily about the videos, which are still online. She also testified that she fears that she will have children who will one day come home and say that other kids have seen the nude images.

Jurors must decide how Barrett came to be placed next to her room in the hotel. She maintains that the hotel honored a request of his to be put in an adjacent or conjoining room but never told her about it. The defense maintains that Barrett schemed his way into getting into the room.