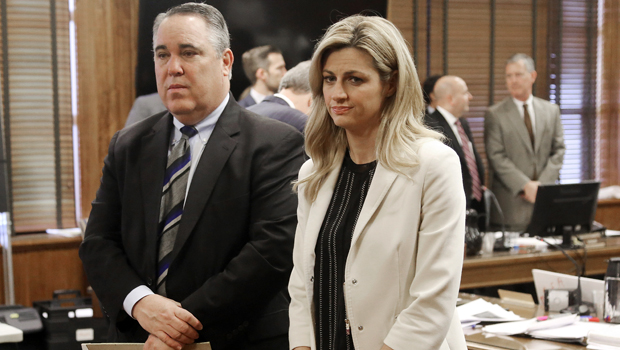 Jurors were somber as they watched the footage, with one woman at times turning away from the projector. Andrews tearfully left the courtroom right before the videos were shown.

Andrews has filed a $75 million lawsuit against Barrett, West End Hotel Partners, which is the franchise owner of the Nashville Marriott at Vanderbilt University, and Windsor Capital Group, which manages the hotel.

On Wednesday, the sportscaster's father testified that Andrews vomited before reluctantly agreeing to watch the videos with the FBI to help identify the person who took them.

Jurors in Davidson County Circuit Court in Nashville saw 4 1/2 minutes of video taken at the Nashville Marriott at Vanderbilt University in September 2008. They also viewed a video from a hotel in Columbus, Ohio.

A computer science professor said a conservative estimate is that at least 16.8 million people have viewed some of the secretly shot footage online, including on pornographic websites.

Also Thursday, a psychotherapist testified that Andrews was anxious and depressed after Barrett was let out of prison.

Loren Comstock told the jury that Andrews came for therapy in 2012 because she promised her parents that she would seek help after the stalker was released.

Comstock, whose video deposition testimony played before the jury, said Andrews was worried the videos would hurt her career.

At the time of the stalking, Andrews was working for ESPN and staying in the Nashville hotel to help cover a college football game for the network. She now works for Fox Sports and is a host for the TV show "Dancing With the Stars."

"She told me that she had aspired to be a sportscaster from the time she was little girl and that she had worked hard to establish herself, and that she was concerned that this incident made a mockery of her and it would impact people being able to take her seriously," the therapist said.

Comstock described Andrews as obsessed, saying she checked the Internet every day to see what was being said about her. Andrews, the therapist said, did not want to be defined by the videos.

One issue jurors will have to decide is how much emotional suffering Andrews endured as a result of the videos.

Comstock denied that the sportscaster had post-traumatic stress disorder, but only because her life was not in danger when the videos were made.