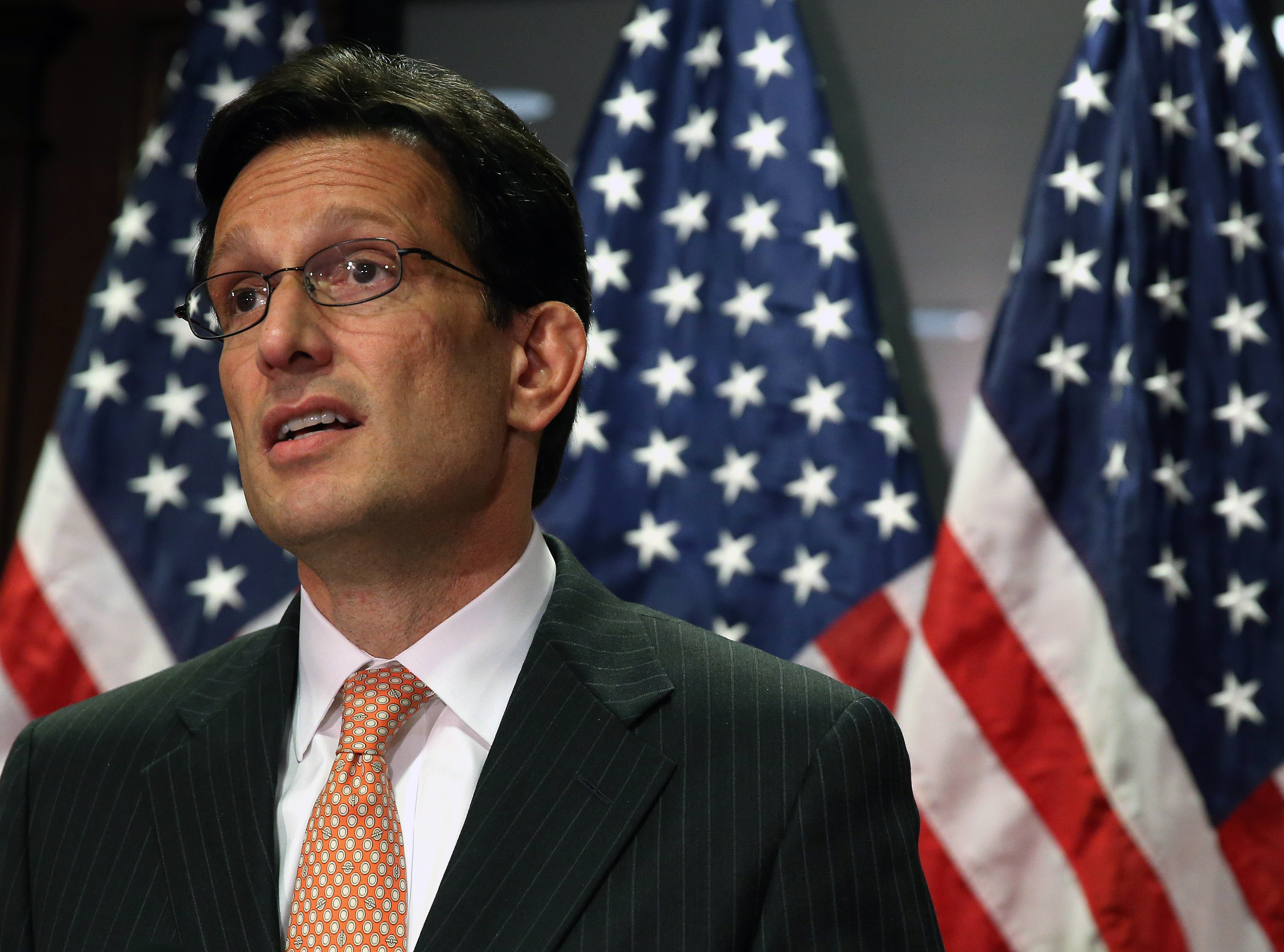 RICHMOND, Va. -- House Majority Leader Eric Cantor could be the next House speaker, but first he has to get past a little-known, tea party-backed challenger with a vocal following in Tuesday's Republican primary in Virginia.

Cantor is squaring off against Dave Brat, an economics professor who has never held elected office and has raised just a fraction of what Cantor has.

Although he's a political novice with little money, Brat has been a thorn in Cantor's side, casting the congressman as a Washington insider who isn't conservative enough. Last month, a feisty crowd of Brat supporters booed Cantor in front of his family at a local party convention.

"Listen, we are about a country of free speech, so decency is also a part of this," Cantor told the crowd.

He then took aim at Brat directly: "It is easy to sit in the rarified environs of academia in the ivory towers of a college campus with no accountability and no consequence ... when you throw stones at those of us who are working every day to make a difference."

Cantor's campaign has held to a variation of that theme in TV ads, a website and mailers accusing Brat of being a "liberal college professor." The most recent campaign finance reports show Cantor spent more than $1 million in April and May and has more than $1.5 million left in the bank.

Beltway-based groups have chipped in, too. The American Chemistry Council, whose members include many blue chip companies, spent more than $300,000 on TV ads promoting Cantor. It's the group's only independent expenditure so far this election year. The American College of Radiology political action committee paid nearly $23,000 for fliers touting Cantor as better qualified than Brat at "ending business-as-usual in Washington."

Brat, by contrast, has raised just more than $200,000 for his campaign, according to the most recent campaign finance reports. He's hoping to offset the cash disadvantage with endorsements from conservative activists, like radio host Laura Ingraham, and with help from tea party activists angry at Cantor.

Intra-party Republican squabbles between the tea party and the GOP establishment have been frequent in Virginia since tea party favorite Ken Cuccinelli lost last year's gubernatorial race. This year, Cantor supporters have met with stiff resistance in trying to wrest control of the state party away from tea party enthusiasts, including in Cantor's Richmond-area home district.

Cantor, who was in the good graces of tea partyers a few years ago, now finds himself a target of the movement.

"It does speak to the kind of restlessness of the tea party," said University of Richmond political science professor Daniel Palazzolo.

The battles mirror a larger ongoing identity crisis for the GOP nationwide. Several longtime Republican incumbents have been fending off tea party primary challengers this year.

That's the same argument Brat is attempting to make about Cantor, who was first elected in 2000 and has ties to tea party-backed lawmakers in Congress. Brat says Cantor has spent too much time in Washington and lost touch with his conservative base back home.

"The job title is representative. It's hard to represent people when you haven't met them," said Brat, who teaches at Randolph-Macon College, a small liberal arts school north of Richmond.

Cantor spokesman Ray Allen said Cantor isn't worried but has a duty to respond to Brat's attacks. Allen also said it's prudent to run a full-scale campaign in an era when super PACs can drop into races and spend millions.

"You have to run a full campaign, and you have to take every election seriously, even if your opponent doesn't have a lot of money," said Allen.

Much of the campaign has centered on immigration, where critics on both sides have taken aim at Cantor.

Brat has accused the House majority leader of being a top cheerleader for "amnesty" for immigrants in the U.S. illegally. Cantor has responded forcefully by boasting in mailers of blocking Senate plans "to give illegal aliens amnesty."

It's a change in tone for Cantor, who has repeatedly voiced support for giving citizenship to certain immigrants brought illegally to the country as children. Cantor and House GOP leaders have advocated a step-by-step approach rather than the comprehensive bill backed by the Senate, but they've made no move to bring legislation to a vote and appear increasingly unlikely to act this year.

Cantor's also publicly taken on President Obama on immigration, a move that's likely to earn accolades from the conservative base.

Responding to a White House statement lamenting "extreme measures" taken by Republicans to block any "meaningful reform" on the immigration, Cantor recently charged: "After five years, President Obama still has not learned how to effectively work with Congress to get things done. You do not attack the very people you hope to engage in a serious dialogue."