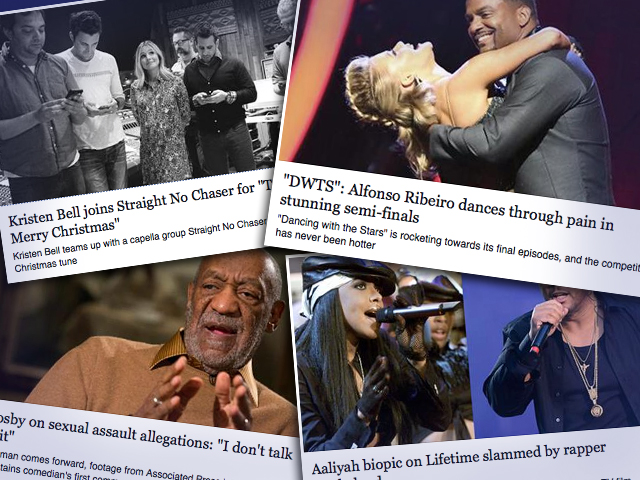 It was a busy week in the world of entertainment. We had the release of multiple holiday songs, a funny "Frozen" cover song (thought those words would never be said in order) and an enlightening interview from Jaden and Willow Smith!

Facebook has tallied the top 10 most discussed stories in entertainment this week. What had you talking? And what popped up most on news feeds across the U.S.? What attention-grabbing stories can you blame for the fact that your new default photo only got eight likes?

The Holderness family is all about that baste! Their new Thanksgiving parody takes on Meghan Trainor with hilarious, fun-for-the-whole-family results.

Here's a Christmas gift for a cappella fans: Pentatonix have released another holiday tune. This time, they belt out, "That's Christmas to Me." Prepare for some intense harmonizing!

3. Idina Menzel and Michael Buble release "Baby It's Cold Outside" -- for kids

Speaking of Christmas songs, Idina Menzel and Michael Buble have teamed up for a cover of "Baby It's Cold Outside." The one twist: It stars kids. Finally! One- to 12-year-olds are very underrepresented in music videos:

Don't worry, this next post is not about Christmas! Just kidding. It is. Kristen Bell and Straight No Chaser have released a holiday song for millennials. "Text Me Merry Christmas" is a cause we can all get behind, right, fellow twentysomethings?!

Meanwhile, things are only getting worse for Bill Cosby. In an interview with The Associated Press, the actor was asked about rape allegations, to which he responded, "I don't talk about it." As the interview was winding down, he then asked the interviewer not to air any of that portion. Yikes!

Jaden and Willow flew down from Planet Smith to do an interview this month with T magazine. The result was as bizarre as we would have guessed:

Wendy Williams premiered a film this week about the career and life of late singer Aaliyah, who died in 2001. Let's just say, it sparked much controversy. Despite the critics, Williams stands by her film:

What a nice gesture from Jay Leno! The former talk show host surprised a veteran this week with a visit -- and a new car. Pretty heartwarming stuff:

"Breaking Bad" and "Frozen" weren't worlds we expected to collide, but indeed, they have. Fans of the AMC show enjoyed an animated Walter White singing "Do You Want to Build a Meth Lab" this week. Check it out here:

10. "Guardians of the Galaxy" soundtrack released for free - -but just for one day

Many lucky -- and quick -- fans of "Guardians of the Galaxy" got the film's terrific soundtrack for free Wednesday from Google Play. But if you caught on too late, sorry, this sweet deal only lasted one day:

11. Alfonso Ribeiro powers through back injury on "Dancing With the Stars"

Good on you, Carlton! Despite a back injury, the "Fresh Prince of Bel Air" actor dazzled judges on this week's "Dancing with The Stars":

Maria Jose Alvarado, 19, and her sister, Sofia, 23 were murdered by Sofia's boyfriend, Plutarco Ruiz this week. He confessed to the crimes and lead police to the bodies. Maria won Miss Honduras 2014.

*Buzz rankings reflect the top entertainment topics being discussed on Facebook, Nov. 17-20, in the United States. Rankings are based on both frequency and momentum: the Facebook conversations that not only got a lot of buzz during the week, but also saw a notable increase compared with the previous week.