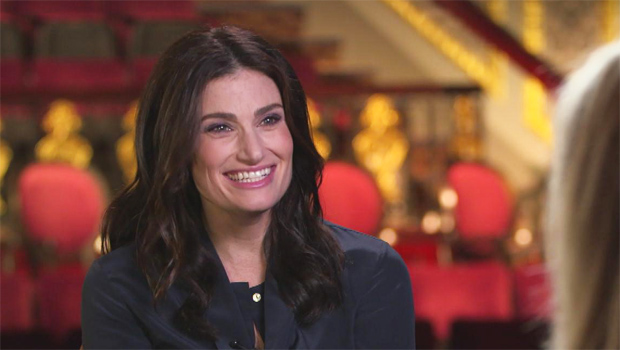 ADELE DAZEEM is the mixed-up name by which IDINA MENZEL was introduced at the Oscars last month. This morning she straightens that out once and for all in a talk with our Tracy Smith:

Broadway superstar Idina Menzel has this kind of effect on people. For her legions of fans -- they call themselves "Fan-zels" -- only a hug will do.

And now, Menzel needs the public to embrace her like never before.

She stars in the new Broadway musical, "If/Then," about a woman struggling with the choices that change her life.

There's a great supporting cast, but Idina Menzel's name is front and center on the marquee.

"You've been one of the big names on that marquee before," said Smith, "but to be THE big name, what's that like?"

"It's kind of scary, yeah," said Menzel. "I feel a tremendous responsibility to sell tickets. My name's up up there on the marquee, Broadway, I get into that vibe. And then other days, like, I freak out a little bit."

The show's message could be that life can be good even if it doesn't always turn out exactly like you'd hoped.

It's something Idina Menzel seems to live by.

She was raised on Long Island, New York, the daughter of a therapist and a pajama salesman.

By 1996, the adorable kid had become a hot young singer on the verge of stardom. She'd won a coveted role in what would become the monster Broadway hit, "Rent."

CBS' "48 Hours" followed her during her last few days before the show opened and changed her life forever.

It was there that she met (and fell for) fellow cast member Taye Diggs. Her character, Maureen, would taunt him every night on Broadway, and later in the movie version.

"Yeah," said Menzel. "I thought he was cute, and I came up with the blocking. I think my character should take her pants down and moon every night this gorgeous man."

And a few years later, there was ANOTHER role of a lifetime, as the witch Elphaba in "Wicked." And she was fine with wearing green face paint: "Yeah, I really wanted that role."

She may have been the first wicked witch to win a Tony Award for Best Actress in a Musical.

Idina Menzel's career seemed to defy gravity, but she couldn't: On her next-to-last performance, she stopped the show by falling through a trap door and breaking her ribs.

"And then the worst of all of it is that 20 minutes later, the understudy got her makeup on, and all the people were still waiting to see her," Menzel laughed. "They didn't go to the hospital to see how I was. They waited to see what was gonna happen with the show. I was appalled!"

She got her final bow anyway: the next night, she hobbled onstage in a track suit. The ovation reportedly lasted a full five minutes.

But as big moments go, there aren't many that can top the 2014 Oscars.

The mega hit "Let It Go," from the animated film "Frozen," was nominated for Best Original Song . . . and the voice behind it, Idina Menzel, was going to sing it live in front of the whole wide world.

"I literally for weeks, had been working on the song 'cause it's really an acrobatic, difficult song," Menzel said. "I can't just wake up in the morning, go out, and sing it in front of Meryl Streep and Julia Roberts, you know what I mean? Like, I have to train and work on it."

And she left nothing to chance.

"I wore shoes that were the chunkiest, highest heels, but they're, like, platforms. They felt like blocks, 'cause I wanted to be really grounded. And I also said they have to park and bark me. Jenn Colella taught me that, she's one of the girls in the show. 'Just park and bark, honey. Park and bark.'"

What does that mean? "Just let me stand and sing. Don't make me move and sing."

She took her place on the stage, and then she was introduced by John Travolta as "the wickedly talented, one and only Adele Dazeem."

"I think my first reaction to 'Adele Dazeem' was, 'Wait, did I hear that wrong?'" said Smith. "Was that your reaction, too?"

"No, it wasn't, 'Did I hear that wrong?' For a split second, I felt sorry for myself, like, 'Awwww.' And then I quickly said, 'Get your ego out of this. You're at the Oscars. Who the hell cares, and sing the song like you know how to sing it.'

"And what if it all happened, but I had totally caved and didn't do a good job? Then it would've been even a different fiasco. So at least I was able to come through and end really strong.

"And you know, Adele Dazeem -- or whoever I am -- is actually a really good singer, you know?" she laughed.

The gaffe went viral, giving Menzel a new measure of fame, and a wider audience the chance to discover what her fans knew all along.

But even while her career soared, Menzel's personal life hit a bump. Her marriage to Taye Diggs broke up late last year.

"Can you explain what happened?" Smith asked.

"No," she said. "We were together for 18 years. We've been through a lot of ups and downs, and we worked really hard for a long time. And I think more than it being the business than what people think, it's so hard in our business to stay together. I just think, you know, we've grown apart, grown up, going on our own separate ways."

"And how are you?" Smith asked.

"Well, I'm good. I'm lucky 'cause I've had all of these distractions and I've been working. I mean, if I didn't have a job, I'd be home eating, like, a tray of brownies and watching sad romantic comedies and Bridget Jonesing it out, you know? But I'm busy, so I keep moving."

She also says their four-year-old son Walker keeps her grounded.

"I have a kid that doesn't care if mommy's sad or whatever," said Menzel. "And I'm good 'cause I'm doing something I love. And I laugh every day with everyone in this cast."

So far, Menzel's new show is holding its own. One thing's for sure: Idina Menzel will take what life gives her, and make it sing. "It makes my parents happy, having a Jewish girl from Long Island make it to Broadway -- that's it, you know?"

To watch a scene from the film "Frozen" featuring Idina Menzel's performance of "Let It Go," click on the video player below.