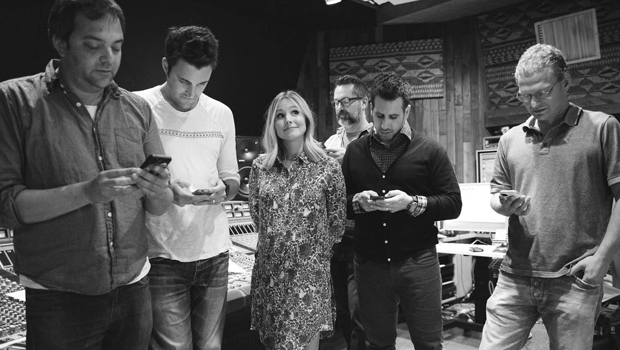 Do you want to build a snowman? What about singing Christmas songs? Kristen Bell's now got you covered on both fronts.

The actress, who provided the voice of Anna in "Frozen," has now lent her pipes to a new tech-savvy tune just in time for the holiday season.

Bell teamed up with a capella group Straight No Chaser for "Text Me Merry Christmas," an ode to spreading holiday cheer the not-quite-old-fashioned way.

For example, Bell croons, " "This holiday / You'll be far away /And I'll be all alone / So please remember / This December / To fully charge your phone."

Cue the mentions of tweets, Facebook messages and emojis (but voicemails are "from Christmas past," in case you were wondering). There's even a line about sending a selfie to kiss under the mistletoe.

"We wanted a Christmas song that spoke to how informal communication has become," SNC's Randy Stine told RyanSeacrest.com, where the song premiered Monday. "As soon as we heard the first demo it was apparent that it had to be a duet ... the only voice we heard singing this was Kristen Bell and she nailed every note and delivered the lyrics with the perfect comedic tone. We were hanging on her every word ... when we weren't looking at our phones."

You can download the song on iTunes beginning at midnight, or hear it in the corresponding lyric video below: