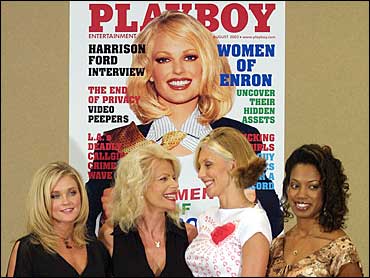 Playboy's "Women of Enron" reveal much more than shady accounting in a 10-page pictorial that hits newsstands Friday.

Ten past and present Enron women shed their threads for the Chicago-based adult magazine's August issue, though some showed more of the naked truth than others.

"I was always the one who broke the rules," said Shari Daugherty, a graduate of Fort Bend Baptist Academy in suburban Houston who still works as an information technology administrator at Enron's 50-story downtown headquarters.

"My mom always said as long as everything is covered, it's fine," said the 22-year-old Daugherty, who has modeled before. She didn't follow that advice when she posed wearing only shoes and a belly chain atop Enron's parking garage, with its two glass towers in the background.

Daugherty was among 300 women who answered Playboy's March invitation to pose. She joined three others Tuesday to discuss their experiences.

They said they posed for the fun of it and to earn some money — though none of them would say how much the magazine paid them.

"It's privileged information, but it was substantial," said Janine Howard, 39, who was laid off from her job selling energy for defunct Enron Energy Services. "They were very, very generous."

The former No. 7 company on the Fortune 500 imploded last year in a storm of hidden debt and inflated profits. Employees and retirees saw pension plans loaded with Enron stock evaporate when shares became worthless after trading at an all-time high of near $90 in August 2000.

None of the four models who spoke Tuesday said they suffered the kind of financial losses that devastated others who depended on stock for retirement or their children's college funds.

Reed said she sold her Enron stock before shares began tumbling exponentially last fall because she needed the money. Daugherty said she made sure her pension plan was diversified so her losses were minimal, and Howard had shut down her portfolio.

Courtnie Parker, 27, who was laid off as an Enron recruiter last December, said she'd only worked there a year, so her losses were small.

Parker was the only model to avoid frontal nudity in the pictorial because she didn't want to offend her grandparents.

The women voiced no bitterness toward the company or its executives, though Howard said Kenneth Lay, former chairman and chief executive, should have known his company was in jeopardy.

"He needs a heart," she said. "Get awake and find out what's happening in your company. We knocked the market out."