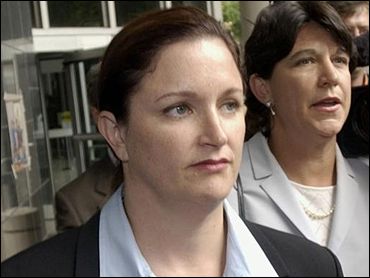 The wife of Enron's former finance chief surrendered on Monday to begin a year in prison.

Lea Fastow, a real estate and grocery heiress, reported to the federal lockup in downtown Houston, to serve the sentence for her misdemeanor conviction of signing a fraudulent tax return to help her husband, Andrew, hide ill-gotten income from schemes that fueled the energy company's crash.

The family home is a $696,000, two-story brick home in the affluent Southampton neighborhood. When Andrew Fastow pleaded guilty in January, he agreed to surrender $23.8 million in cash and property, including two vacation homes in Galveston and Vermont.

But that life is a world away from the federal detention center, a gray, 11-story building where the only chance to go outside is during brief and rare outings on the roof. She'll probably prepare food or wash bed sheets for less than 50 cents a day.

"She'll spend the vast majority of her time indoors under fluorescent lights," said David Novak, a former Microsoft consultant who served a year in a federal prison for mail fraud. Now he runs a consulting service in Salt Lake City, helping other federal prisoners prepare for life on the inside.

The Fastows' guilty pleas were a breakthrough in the two and a half year long investigation into the scandal that led to the energy giant's collapse. Both are cooperating in the prosecution of other former Enron executives.

Even before her marriage to Andrew Fastow, Lea Weingarten was well-to-do, an heiress to a grocery and real-estate fortune amassed by one of Houston's old-line families.

At the detention center in Houston, a narrow locker will hold the few books, photos and other personal belongings she's allowed to have. She will wear prison-issue tan uniforms, and her mail could be read first by prison staff.

"Once you're in that environment, you have to decide, 'Am I going to sink or swim?' Most of us learn how to swim," said Vanessa Leggett, a writer who was jailed at the Houston facility for nearly five months in 2001. She was sent there after she refused to surrender her research for a book she was writing about a former bookie charged with arranging his socialite wife's death.

Leggett, like Lea Fastow, is educated and well off. But in the federal detention system, where most prisoners are serving sentences for drug crimes, everyone's on a level playing field, she said.

"Status is from the outside looking in. There's not really that consciousness on the inside," Leggett said. She said Lea Fastow should have few problems if she keeps to herself and respects others.

Lea Fastow wasn't accused of masterminding shady partnerships or financing schemes that led to Enron's collapse. Although she had been assistant treasurer, the schemes largely were hatched after she quit Enron in 1997 to be a full-time mother.

She was indicted on six felony tax and conspiracy charges in April 2003, about six months after her husband's initial indictment on what grew into 98 counts of conspiracy, fraud, insider trading and other charges.

She pleaded guilty to a charge of signing tax forms she knew didn't include ill-gotten income from her husband's schemes. She also admitted she endorsed and deposited checks of ill-gotten gains disguised as gifts written to their sons.

Her lawyer said Lea Fastow helped persuade her husband to plead guilty to two counts of conspiracy, and agree to a 10-year sentence.

But the judge balked at a plea agreement that would have given Lea Fastow five months in prison and five months confined at home, and he imposed the maximum sentence allowable.

She had hoped to serve her time at a minimum-security prison camp for women in Bryan, about 90 miles northwest of Houston.

There, the couple's two young sons could have enjoyed playground equipment during visits. She could have worn khaki shorts and T-shirts, played softball, walked on an outdoor track, or perhaps tended one of the complex's vegetable and flower gardens.

But U.S. District Judge David Hittner refused to recommend that the Federal Bureau of Prisons place her at any specific institution.

Novak said the prisons bureau has made efforts to limit exposure of minimum-security prisoners to inmates known to be more dangerous.

"There's always the risk of a physical altercation in any high-density environment, but I've had lots of clients in detention centers who have never had a problem," Novak said.

"The quicker she just kind of keeps her head down and does her time and does what she can to help those around her, the better off she'll be."