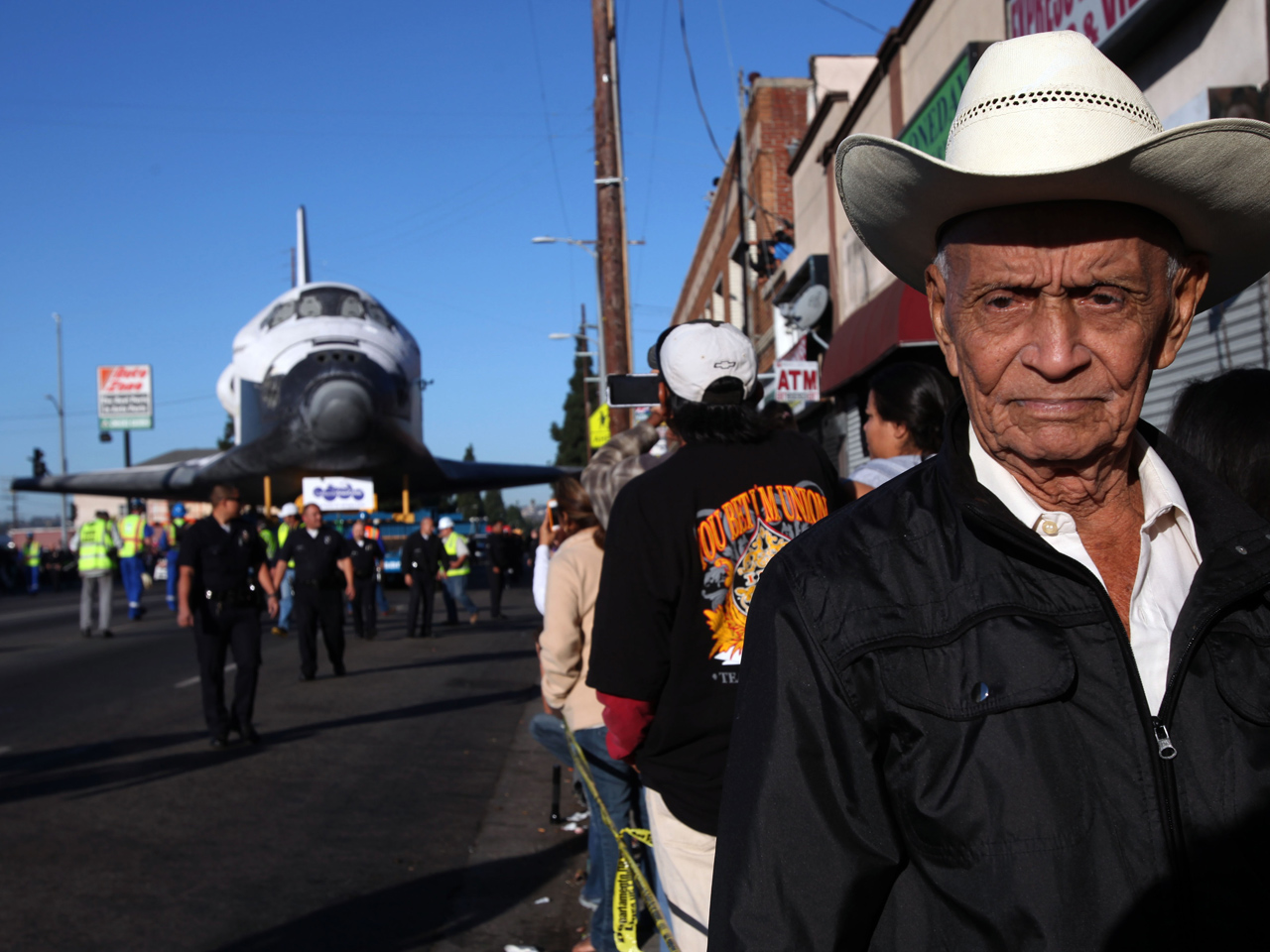 LOS ANGELES In thousands of Earth orbits, the space shuttle Endeavour traveled 123 million miles. But the last few miles of its final journey proved hard to get through.

The shuttle, originally expected to finish the trip early Saturday evening, did not arrive at the museum until early Sunday afternoon, The Los Angeles Times reports.

At times it seemed the only thing moving was the shuttle's fast-changing ETA.

Saturday started off promising, with Endeavour 90 minutes ahead of schedule. But accumulated hurdles and hiccups caused it to run hours behind at day's end. The problems included longer than expected maintenance of the rig carrying the shuttle and physical obstacles within the shuttle's wingspan including light posts, building edges, and most of all trees.

In a scene that repeated itself many times, a small tree on the narrowest section of the move brought the procession to a stop, forcing crews to find creative ways to dip a wing under or raise it over the tree without having to cut it down.

Some 400 trees had been removed to avoid such situations, but officials said most of the trees that gave them trouble could not be cut down because they were old or treasured for other reasons, including some planted in honor of Martin Luther King Jr.

The crowd had its problems too. Despite temperatures in the mid-70s, several dozen people were treated for heat-related injuries after a long day in the sun, according to fire officials.

But it was a happy, peaceful crowd, with firefighters having only to respond to a sheared hydrant and a small rubbish fire, and no reports of any arrests.

And despite the late problems the mood for most of the day was festive.

At every turn of Endeavour's stop-and-go commute through urban streets, a constellation of spectators trailed along as the space shuttle ploddingly nosed past stores, schools, churches and front yards as it inched through working-class streets of southern Los Angeles.

Along the 12-mile course, thousands marveled at the engineering. Some rooted for Endeavour when it appeared it might clip a light post.

"This is great for the city as a whole. It makes us proud," said Dean Martinez, a project director for a nonprofit who began waiting before dawn to get a glimpse of Endeavour.

Unlike other high-profile events like the Academy Awards or the Rose Parade, the procession was centered in some of the area's most economically downtrodden and troubled places. The shuttle passed several gritty areas and shuttered businesses, and rolled down many streets that were aflame two decades earlier during the 1992 riots brought on by the verdict in the Rodney King case.

"Having a shuttle come through this area of high poverty, it can only be a good thing" for the community," said Damian Pipkins, a volunteer at Eso Won Books.

Endeavour hit the pavement before dawn Friday, trundling out of the Los Angeles International Airport on a remote-controlled 160-wheel carrier past diamond-shaped "Shuttle Xing" signs. When it reached a freeway overpass that night, it was towed by a truck.

The shuttle made a late-morning pit stop Saturday at the Forum — former home of the Los Angeles Lakers — where it was greeted in the arena's parking lot by a throng of cheering spectators. It was late to its second public celebration that included a dance performance choreographed by Debbie Allen.

As it wound through South Los Angeles, residents welcomed its presence. Before the move, some lamented over the loss of shade as trees were chopped down.

Others thought it was a decent trade.

"If you have to go through a little bit of pain to have something nice for the community, then it's worth it," said Pamela Tucker, who lives a block away from Crenshaw Boulevard in Los Angeles.

Endeavour may have circled the globe nearly 4,700 times, but its roots are grounded in California. Its main engines were fabricated in the San Fernando Valley. The heat tiles were invented in Silicon Valley. Its "fly-by-wire" technology was developed in the Los Angeles suburb of Downey.

It's no longer shiny and sleek, like when it first rolled off the assembly line in the Mojave Desert in 1991 to replace the lost Challenger. As it cruised block-by-block, it's hard to miss what 123 million miles in space and two dozen re-entries can do to the exterior.

Shuffling Endeavour through city streets was a laborious undertaking — nearly a year in the making. It could not be taken apart without damaging the delicate tiles. Airlifting it was out of the question. So was driving on freeways since it was too massive to fit through underpasses.

There were consequences. Several hundred Inglewood residents suffered hours-long outages when power lines were temporarily snipped. Some businesses lost customers because of street and sidewalk closures.

Such a move is not cheap. The cross-town transport was estimated at $10 million, to be paid for by the science center and private donations.