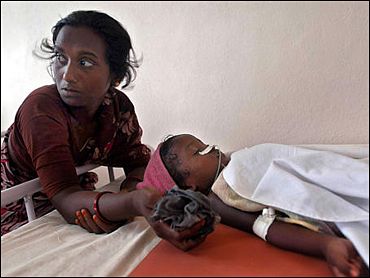 Mosquito-borne encephalitis has killed 110 children in the southern Indian state of Andhra Pradesh in the past six weeks, health officials said Tuesday.

Most of the victims are poor, malnourished children from rural areas who may have succumbed because of a sudden change in weather from intense summer heat to monsoon rains.

P. Laxmi Rajyam, the state's director of health services, said the meningo-encephalitis, which causes inflammation of the brain, has affected at least 196 children across the state. Children are more susceptible because their immune systems are weaker.

Local media have for weeks reported isolated deaths of children for an unknown reason. Rajyam confirmed the toll and the cause for the first time Tuesday in an interview with The Associated Press.

"We have found that the people living in the periphery of the villages, especially near the fields and water bodies, have fallen victim to this disease," she said.

Rajyam said two leading federal laboratories in New Delhi and the western city of Pune had tested the virus and found no link to the West Nile virus that has caused encephalitis in the United States.

The disease hits India every year, but usually in the drier months of October-December and it usually causes fewer deaths.

"It is the first time we are witnessing this disease in June-July," Rajyam said.

World Health Organization spokeswoman Maria Cheng said encephalitis is endemic to Asia and there are around 50,000 cases every year.

"What is worrisome about this particular outbreak is the case fatality rate is around 55 percent, whereas normally it is 30 percent," Cheng said in Geneva. "But I think the kids falling ill are perhaps not getting treatment immediately."

Rajyam said the number of cases is declining, but they have occurred in 10 of the 23 districts in Andhra Pradesh.

The symptoms start with very high fever, followed by fits, vomiting, then vomiting of blood, and finally, coma. There are also changes of behavior and delirium.

Many parts of India are experiencing above-average monsoon rains, causing heavier flooding than usual and sending thousands of people from their homes to higher areas.

"We are receiving good rains for the first time after a three-year gap and with the rains we have also got a massive attack of mosquitoes," said S. Venkateshwara Rao, a state lawmaker from the affected district of Nalgonda. Nine children have died in his constituency.