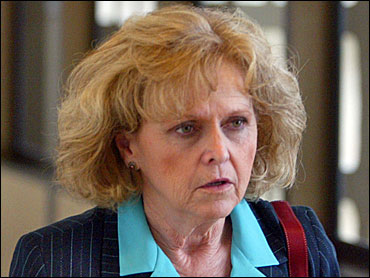 Lawyers for a woman who was spanked in front of her co-workers as part of what her employer said was a camaraderie-building exercise asked a jury Wednesday for at least $1.2 million for the humiliation she claimed to have suffered.

Janet Orlando, 53, quit her job at the home security company Alarm One Inc. in Fresno and sued, alleging discrimination, assault, battery and infliction of emotional distress.

Employees were paddled with rival companies' yard signs as part of a contest that pitted sales teams against each other, according to court documents. The winners poked fun at the losers, throwing pies at them, feeding them baby food, making them wear diapers and swatting their buttocks.

"No reasonable middle-aged woman would want to be put up there before a group of young men, turned around to show her buttocks, get spanked and called abusive names, and told it was to increase sales and motivate employees," her lawyer, Nicholas "Butch" Wagner, said in his closing argument.

Lawyers for Alarm One, an Anaheim-based, 300-employee company, said the spankings were part of a voluntary program to build camaraderie and were not discriminatory because they were given to both male and female workers.

"This is being done for one reason and one reason only, money," said K. Poncho Baker, the company's lawyer.

Alarm One officials ceased the practice in 2004, the year Orlando sued, after another employee complained of being injured, according to court records.