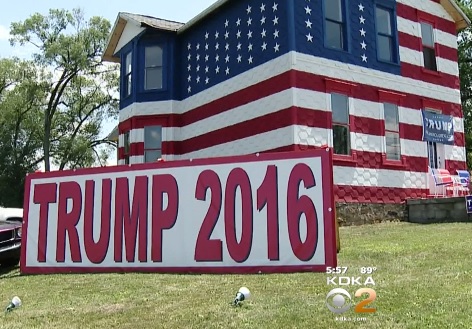 YOUNGSTOWN, Pa. -- Rolling down Route 982 in Youngstown, Westmoreland County, you may pass a house with an American flag, and then you'll pass the house next door, which is an American flag, CBS Pittsburgh reported.

Leslie Rossi hands out Donald Trump hats and other freebies to visitors who keep showing up at the house in Pennsylvania. With a huge banner and multiple signs supporting her candidate, there is no doubt who she and her family are voting for.

The mother of eight and her friends aren't bashful about making their feelings known. But neither are the drivers.

"Here we'll get a lot of honks and waves," she said. "Sometimes I'll get a thumbs down. But we'll just wave anyway. Sometimes they'll yell for the candidate they're for, if it's different."

Rossi and her husband buy old buildings, restore them, and rent them. She considers the flag-painted house a positive approach to campaigning.

"It doesn't do any good to respond negatively. So if it's too far, or I don't feel I can control it, I just say I don't want to speak to you. Please leave me alone," she said.

So what happens to the house after the election?

In other words, the gigantic "flag" will go.