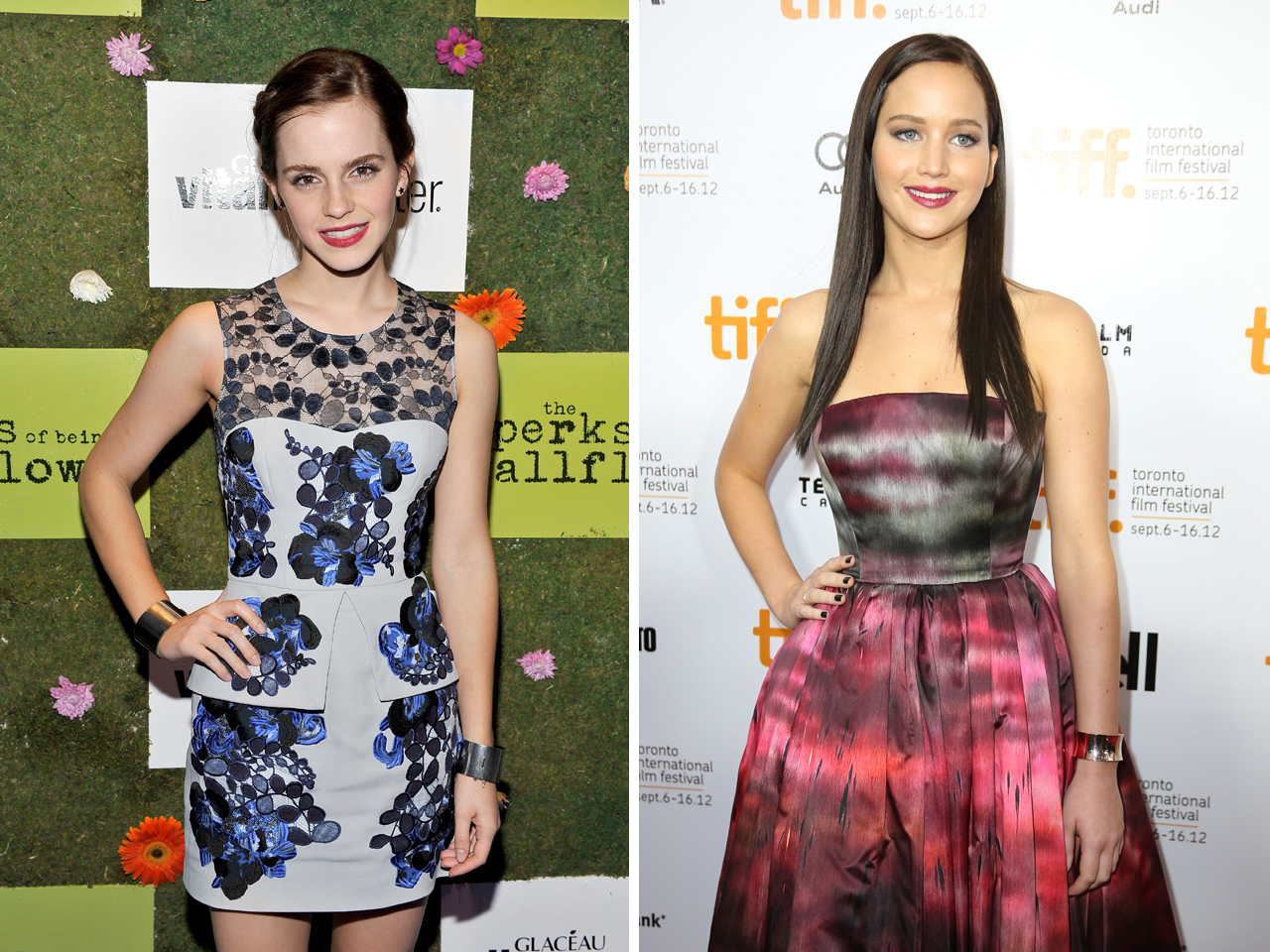 (CBS/AP) Emma Watson and Jennifer Lawrence, stars of two of the biggest recent film franchises ("Harry Potter" and "The Hunger Games," respectively) were both in Toronto over the weekend, promoting their upcoming movies at the Toronto Film Festival.

Watson was on hand to promote her first major post-"Potter" film, "The Perks of Being a Wallflower," in which she plays an American teen who's part of a clique of hip outsiders at a Pittsburgh school.

Watson, 22, walked the red carpet in a floral and lace dress by Canadian-born designer Erdem on Saturday for the "Perks" premiere. She said the film gave her a taste of a whole different life considering her cloistered upbringing on the set of the Potter franchise, in which she was cast as bookish young hero Hermione Granger at age 9.

"It felt pretty exotic to me. It really did. It was a very voyeuristic experience," Watson said in an interview Sunday, where "Perks" played ahead of its U.S. theatrical release Sept. 21. "Getting to go to Friday night football and Olive Garden, school dances and all of that stuff. That was really another world to me."

Lawrence, who plays heroine Katniss Everdeen in "The Hunger Games" films, was at the Toronto festival to promote her new film, "Silver Linings Playbook," which opens in theaters on Nov. 21.

The actress, also 22, plays an unstable young widow who falls for another troubled spirit, a man (Bradley Cooper) fresh out of a psychiatric ward after turning violent when he caught his wife cheating on him. Directed by David O. Russell, the film co-stars Robert De Niro, Julia Stiles and Chris Tucker.

Lawrence - whose blonde hair was dyed dark, donned a Christian Dior Haute Couture gown and Dior shoes for the "Silver Linings Playbook" premiere on Saturday. She later changed into an Alexander McQueen dress and Alexandre Birman shoes for the film's after-party, according to reports.

Lawrence had reservations about breaking "Mockingjay" into two parts - "until I heard how much money I would be getting," she said with a long laugh.

She said she initially thought it would be better to do the finale in a single film. When she got the news that it would be done in two parts, Lawrence was in the middle of shooting "The Hunger Games," and she re-read the books and thought about how much had to be left out in adapting the first one.

"So that's my artistic answer. It's a very diplomatic answer. But what I'm really thinking is yacht, yacht. My own island."

Other stars seen at the Toronto Film Festival over the weekend included Ben Affleck, who directs and stars in the film "Argo," and Halle Berry and Tom Hanks, who were promoting their film "Cloud Atlas."