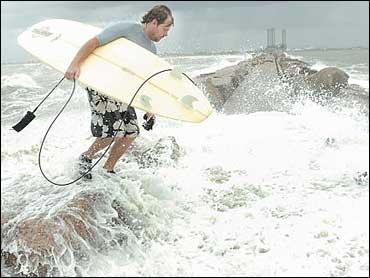 Hurricane Emily crashed into northeastern Mexico as a strong Category 3 storm Wednesday, its 125 mph winds battering buildings and beaches and forcing thousands along the Gulf of Mexico to seek safer ground.

"We could see up to a foot of rain across the mountains of northern Mexico, which will certainly produce some life-threatening flooding," said CBS News Meteorologist George Cullen. "Hurricane Emily is a dangerous hurricane."

Officials in Tamaulipas state, which borders Texas, said 18,000 people had been evacuated from 20 low-lying, seaside communities, including nearly everyone from Carbonera, a tiny fishing hamlet.

In San Fernando, a community of 60,000 further inland, life came to a standstill before dusk Tuesday. Relentless rain left large puddles in the streets, and most storefronts were covered with plywood.

In southern Texas, campers emptied beachfront parks on South Padre Island and hundreds of other tourists left the area.

"Drive up and down this island, and you will see boarded storefronts, boarded homes, and not just a few here and there," said CBS News Correspondent Aileen Sirgany. "Not too many people evacuated, but they are taking no chances."

While not in the direct path of the storm, "in southern Texas, there will be bands of heavy rain from Brownsville to Laredo — 2 to 4 inches of rain in spots, along with wind gusts of 40-60 mph later in the day," said Cullen.

At Elma E. Barrera Elementary School, one of several shelters in Texas' Cameron County, families staked claim to areas around the edge of the gym floor. They set up mattresses, blankets, coolers and televisions. Pajama-clad children played basketball or with their video games.

Cindy Ruiz, 32, sought shelter at the school with 12 other family members, including her husband and eight children. The children worked on puzzle books while the adults monitored weather reports.

"This is our first hurricane," said Ruiz, who moved with her family to Texas from Iowa a few months ago. "We didn't want to take any chances with that many kids at home."

In La Pesca, Mexico, residents were taken to a naval base on a relatively high point on the edge of town. There, excited children raced giddily about, shrieking and laughing as their parents settled in.

"Now that there is help, we must accept it," said Marta Neri, a 30-year-old who arrived with her three small children.

In another part of town, 67-year-old fisherman Felipe Portillo helped his sons haul five small, fiberglass fishing boats off the beach and up to the roadside, away from the water.

The landfall marked the second time Emily has bashed Mexico. It was a Category 4 storm when it slammed into the Yucatan Peninsula on Monday, ripping the roofs off resort hotels and stranding thousands of tourists along the famous Mayan Riviera, which includes the resort of Cancun.

No one was killed and there were no major injuries, according to federal officials surveying ongoing cleanup efforts in that region.

Mexico and U.S. oil companies evacuated workers from offshore oil installations in the northern Gulf of Mexico as Emily swept toward the U.S.-Mexico border.