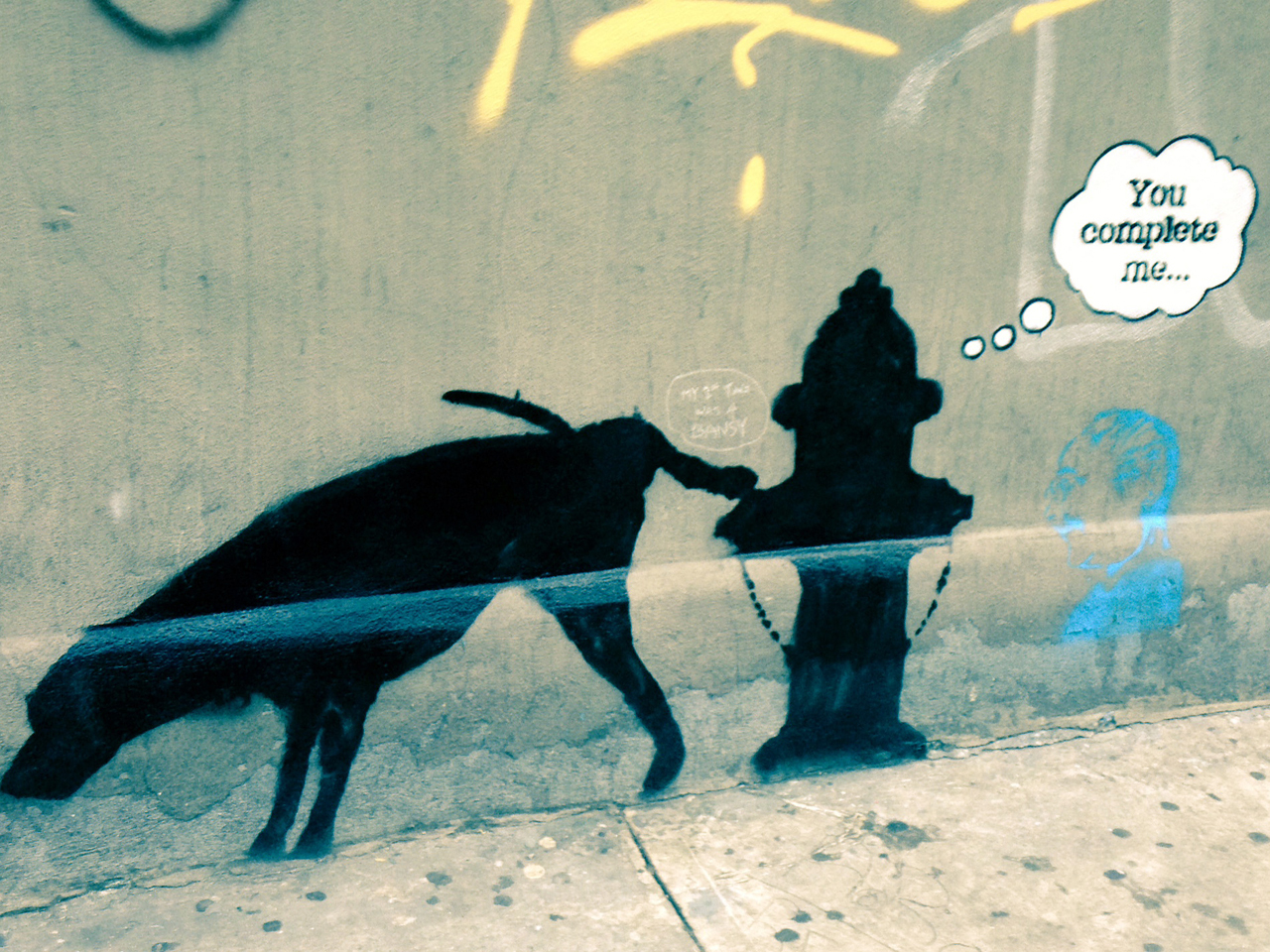 Graffiti by the secretive British artist Banksy is turning up on the streets of New York City -- and all over social media.

Banksy announced on his website that he is undertaking "an artists residency on the streets of New York" this month.

He's posting pictures of his work on the website and fans are plastering the images all over Facebook, Twitter and Instagram. Though he's not providing exact locations, those who happen to come across the works are trying to spread the word.

Jennifer Hawkins, who runs a public relations agency in Chelsea, posted pictures on Facebook after finding "a Banksy sighting right out my office backdoor," on 24th Street between Sixth and Seventh avenues.

Spray-painted on a building wall already defaced by illegible scrawls, the graffiti shows a black silhouette of a dog lifting his leg on a fire hydrant, with the words "You complete me" in a cartoon bubble.

"My favorite part of the whole thing is having the little groupies standing out there," Hawkins said, referring to the small crowds of fans taking pictures.

The Daily Telegraph, a British outlet, has created an online map to try to keep track of the images. The Museum of Modern Art posted links on its Twitter feed with a "Banksy watch" tag.

At least one of the works is gone already, altered by other graffiti artists and then whitewashed. The picture, done on a wall in Chinatown, showed a barefoot boy with a cap standing on another boy's back, pointing at a sign that says, "Graffiti is a crime."

Banksy is calling the New York City effort "Better Out Than In," a reference to a quote by impressionist Paul Cezanne, "All pictures painted inside, in the studio, will never be as good as those done outside."

His website includes a toll-free number and an online "Click here to listen" button with commentary on each image that spoofs the pre-recorded cellphone tours commonly offered at museum exhibits. The commentary mispronounces his name as Ban-sky and is read against a soundtrack of cheesy elevator music.

One line from the phone tour says: "You're looking at a type of picture called graffiti, from the Latin graffito, which means graffiti with an O."

The commentary goes on to say, "Let us pause for a moment to consider the deeper meaning of this work. OK, that's long enough," later adding, "What exactly is the artist trying to say here? ... Perhaps it is a postmodern comment on how the signifiers of objects have become as real as the object themselves. Are you kidding me? Who writes this stuff? Anyway, you decide."

Banksy -- who refuses to give his real name -- began his career in the British city of Bristol spray-painting local buildings. His works now fetch thousands of dollars around the world, but many of his street paintings have been defaced, destroyed or removed.

His website for the New York project has posted images for every day of the month so far. He captioned three pictures posted Friday as "Random graffiti given a Broadway makeover (an ongoing series)."

The pictures showed the words "The Musical," stamped in a stenciled script beneath existing scrawls, so that they read, "Dirty Underwear, The Musical," ''Occupy! The Musical" and "Playground Mob, The Musical." He also gave rough locations for the three as Delancey Street on the Lower East Side and two Brooklyn neighborhoods, Bushwick and Williamsburg.