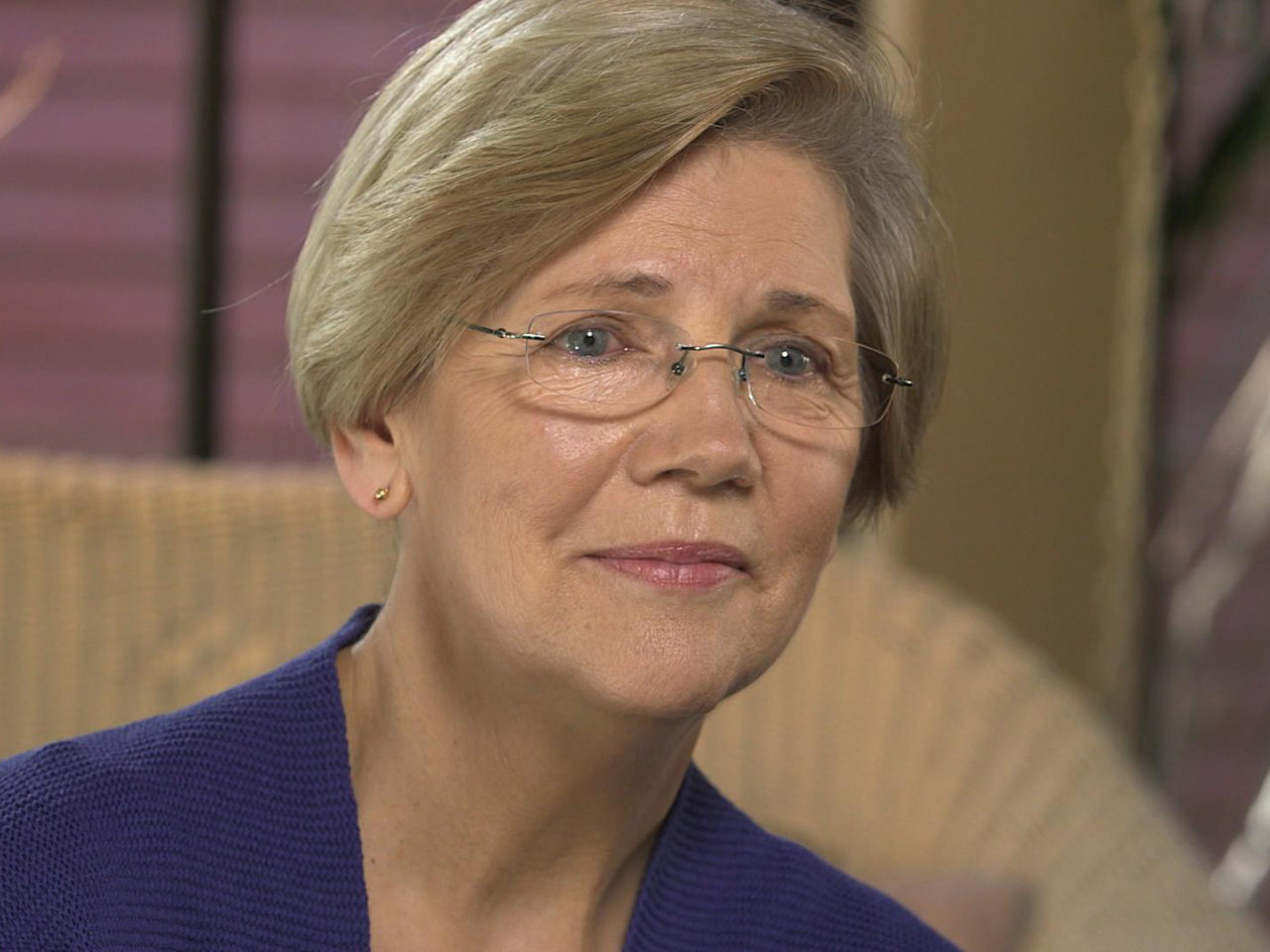 Elizabeth Warren is a freshman Senator from Massachusetts whom some Democrats are talking up as a Presidential candidate -- reason enough for Mark Strassmann to seek her out for some Questions-And Answers:

If you ask many progressives voters from Harlem to Hollywood, they'll say a woman should run for president in two years: Senator Elizabeth Warren.

The Massachusetts Democrat is both revered and reviled; her style is aggressive, and her message is economic populism ("Everyone who works hard and plays by the rule should have a real chance to get ahead."), that Main Street is under siege by Wall Street.

"How can it be," she told Strassmann, "that if you're just big enough and you commit big enough crimes, that there's no one out there who wants to hold you accountable? This is the consequence, again, of too much concentration of money and power."

Warren has written a new book, her tenth: "A Fighting Chance" comes out this week. It's a plea for economic fairness, especially for America's beleaguered middle class, wrapped inside her life story.

"This is my life's work," she said. "For more than 25 years now I've been working on trying to sound the alarm on what's happening to America's middle class."

"You say the game is rigged; what do you mean by that?" asked Strassmann.

"Special deals for those who've already got money, and the ticket gets paid by hardworking families who are barely hanging on," Warren said.

Warren was born into one of those families herself, in small town Oklahoma in 1949. Donald Herring, her father, was a janitor; her mother, Pauline, a stay-at-home mom.

Warren's world -- and worldview -- changed when she was 12: her father had a heart attack.

"He was sick for a long time, and he was out of work," she said. "We lost the family station wagon. And we came right to the edge of losing our home. My mother saved our home with a minimum wage job. But in the 1960s, a minimum wage job would support a family of three above the poverty line. Not today. Not even close.

"I understood right then that people can work hard, they can play by the rules, and they can still take a hard smack."

Warren dropped out of college to get married at 19, moved to Texas, and eventually graduated from the University of Houston. By 1978, she was 29 and divorced with two kids. She also had a law degree from Rutgers . . . and a gift for teaching, which eventually landed her a job at Harvard.

Her specialty was bankruptcy law and its impact on struggling families.

Strassmann asked, "You're the daughter of a janitor, you went to a commuter college, a public law school. You became a Harvard Law School professor and a United States Senator, most of that in the last 20-25 years. How is that then not proof that the American Dream still does work for people?"

"Oh, but look at the foundations of this journey," Warren said. "I went to public school back in the '50s and the '60s, graduated from college and law school in the '70s. That's when you could go to a commuter college and pay $50 a semester and get a really fine education.

"Today, a kid who wants to go to a public university will pay 300 percent more than her mom or dad."

Her expertise in families facing bankruptcy led to her being tapped to be an adviser to the National Bankruptcy Review Commission in 1995.

The bank and credit card lobbies were pushing to limit the rights of consumers to file for bankruptcy. Warren fought against it, but the law passed in 2005.

"I fought that fight for 10 years and held 'em off for a long time. But in the end, I lost big time."

"You say it's big banks vs. families?" Strassmann asked.

"Yeah. I think that big banks are out there making huge profits, often at the expense of working families," Warren said.

Strassmann noted that the U.S. Chamber of Commerce has, in effect, said that Warren is "an enemy of business, particularly big business. Are you?"

"You know, that really chaps me when I hear that," she told Strassmann. "And I want to say exactly why: I'm all for those little businesses, those medium-sized businesses who are out there working. What I see is the playing field is tilted against them."

"And what about big business?"

In 2008, America's economy stared down ruin. Congress approved $700 billion in taxpayer emergency loans to big financial institutions, under a program known as TARP.

"It's no secret that Secretary Geithner and I saw the world very differently," Warren said. "I believed his focus was far too much on the big financial institutions and not on families -- to say in effect, 'Here, take the money, please,' rather than saying, 'We will save our financial institutions, but believe me, there have got to be strings.'

"But none of that was on the table. It was all about how to rebuild the largest financial institutions and to get them back to profitability as soon as possible. And I just thought that was wrong."

"You're willing to push people; how would you describe your style?"

"Intense?" she laughed. "Well, look, the things we're talking about are important. So I care a lot about it. And I get worked up."

Just ask Jon Stewart. Though when she went on "The Daily Show," it was her turn to squirm:

WARREN: "Either we fix this problem going forward, or the game really is over."
STEWART: "When you say it like that, when you look at me like that, and I know your husband is backstage, I still want to make out with you."

But in 2012, Warren admits it stung when President Obama decided against nominating her as the first head of the Consumer Financial Protection Bureau, after Senate Republicans threatened to block her confirmation.

She ran for the U.S. Senate instead, against Republican incumbent Scott Brown, raised $42 million, and won.

The 64 year-old commutes between Washington and Cambridge, where she lives with Bruce Mann, her second husband.

"A Fighting Chance" was written two years into her first term -- like the autobiography from a Senator named Barack Obama in 2006.

"Some people will see this as, you know, 'The Audacity of a Fighting Chance,'" Strassmann said. "Are you writing this book because you're at least still considering running for president in 2016?"

"I'm not running for president. You can ask it lots of different ways. But I wrote this book because we can't wait longer. It's written out of gratitude for my start and the opportunities that America built for me, and how I think that's what we've got to do again. I'm committed to that."