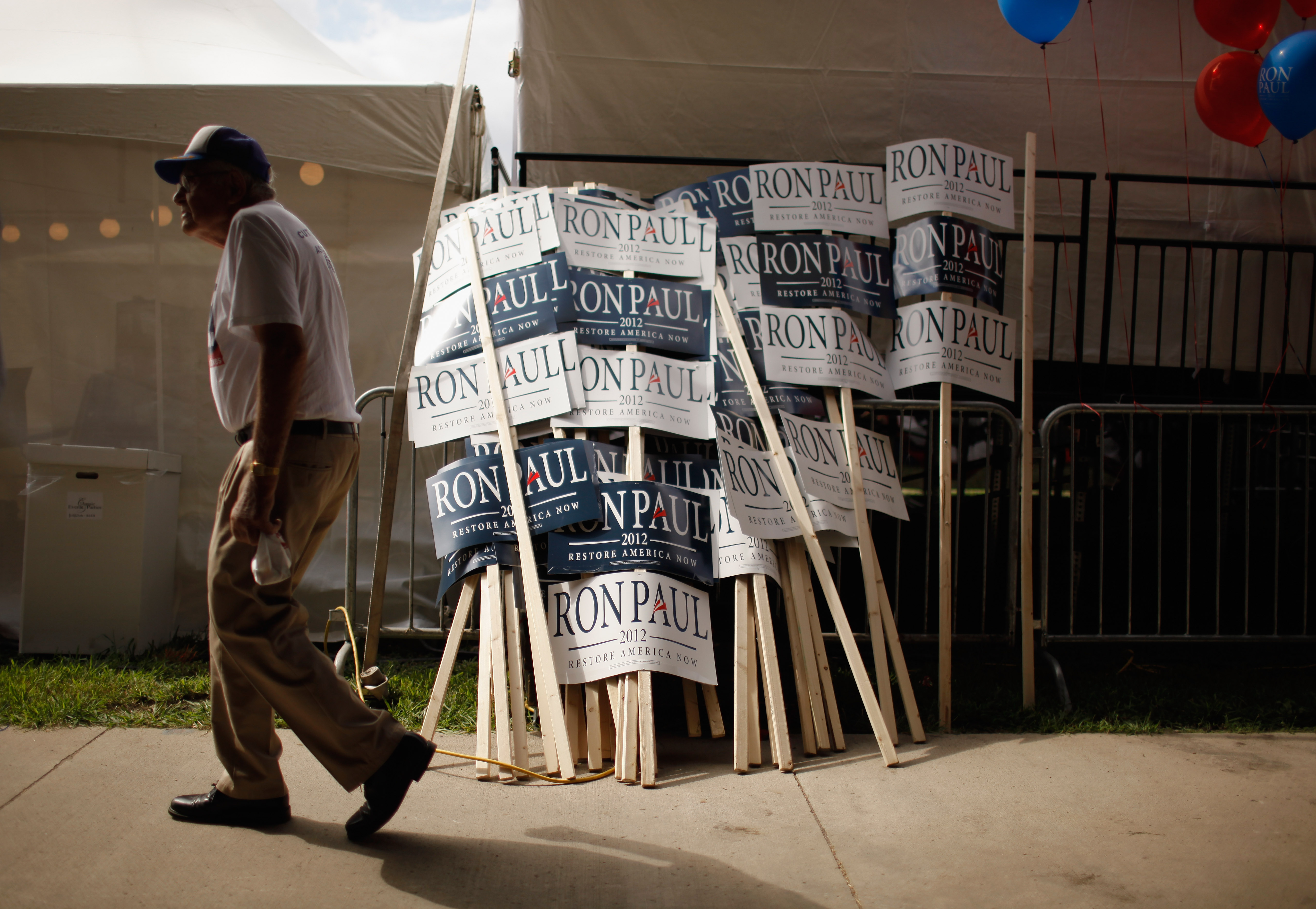 The Iowa Republican Party's central committee voted unanimously to kill the party's presidential straw poll on Friday, a move the state GOP chairman blamed on the lack of candidates participating this year.

"I've said since December that we would only hold a straw poll if the candidates wanted one, and this year that is just not the case," the chairman, Jeff Kaufmann, explained in a statement. "This step, while extremely distasteful for those of us who love the Straw Poll, is necessary to strengthen our First in the Nation status and ensure our future nominee has the best chance possible to take back the White House in 2016."

The poll, which had been held every election cycle since 1979 without a Republican incumbent in the White House, served as an early gauge of grassroots enthusiasm about the candidates in the GOP bullpen. Proponents said that the event helped winnow the field with its preliminary read on Iowa's GOP electorate. But opponents said the poll damaged Iowa's reputation nationally by elevating fringe figures with little chance of winning the caucuses, let alone the nomination or the presidency. They worried that the poll could be used as an argument for stripping Iowa of its first-in-the-nation nominating contest.

Former Florida Gov. Jeb Bush, Florida Sen. Marco Rubio, and former Arkansas Gov. Mike Huckabee all said they wouldn't spend money to compete in the straw poll this year, and Wisconsin Gov. Scott Walker, who leads early surveys of the Iowa GOP electorate, remained coy on the matter, saying he'll make up his mind after he formally declares his candidacy.

That reticence may have sealed the event's fate.

"Part of the calculus is candidates that are willing to participate," John Thompson, a member of the Iowa GOP's central committee, told CBS News on Thursday. "Without their assistance it may be a net loss for the party."

The event, in past years, has been a huge moneymaker for the state party. It sold tens of thousands of tickets, and it used to auction off space for the candidates at the event - those willing to pay the most won the best real estate.

"It has always been a key fundraiser for the state party," Thompson said Thursday.

Despite the straw poll's fundraising potential, though, the decision to cancel the event wasn't a huge surprise. In the wake of Mitt Romney's loss to President Obama in the last election, Iowa Gov. Terry Branstad told the Wall Street Journal that he thought the straw poll had "outlived its usefulness."

Branstad spokesman Jimmy Centers downplayed the governor's comments on Thursday, saying, "That was his opinion in 2012, but this is not a decision made by the governor. This is a state party function."

Centers suggested Branstad would be comfortable with whatever the committee decided on Friday. " If the Republican Party decides to move away from the straw poll, the governor will continue to support them," he said.

Some conservatives in the state, though, believe Branstad has been working behind the scenes to scrap the event for years. Steve Deace, a popular conservative radio host in Iowa, told CBS News on Thursday that the plot to kill the poll was set in motion when Branstad successfully wrested control of the state party from an alliance of libertarians and evangelicals and installed Kaufmann as chairman.

"They already killed the straw poll," Deace said. "It's been dead from the moment they took over."

Deace suggested the state GOP would blame the lack of candidate participation for the straw poll's cancellation, instead of taking responsibility for something they engineered themselves.

"They don't want it, but they can't be seen killing the biggest cash cow they've got," he said. "They're looking for a scapegoat now because they don't want to be seen as the people who popped a cap in the goose that laid the golden egg...Jeff Kaufmann should be proud. He and Branstad got what they wanted, and now they can live with the headlines."

Kaufmann, in an interview with CBS News, said the accusation that he was working to kill the straw poll "nonsense."

"Those folks are people that are part of the original group that put Iowa's first in the nation caucus in jeopardy and they nearly ruined it," he said. "That's just silly."

Perhaps the most common knock on the straw poll was that it was a distraction - it propelled candidates with little national viability to the fore of the race in Iowa, while undermining candidates who could have been real contenders. The result, critics argue, was that Iowan voters have less clout in picking the nominee.

"It's a lovely historical artifact, and a wonderful tradition, but its lack of predictive power and its ability to skew the field for a few crucial weeks has led to nothing but trouble in the last few cycles," GOP strategist Rick Wilson told CBS News on Thursday.

Branstad himself made a similar argument during his interview with the Journal in 2012. The governor pointed to the 2011 victory of Minnesota Rep. Michele Bachmann, a conservative firebrand who won the straw poll only to watch her momentum evaporate by the time the caucuses came around. She placed sixth in Iowa and dropped out shortly thereafter.

"You saw what happened the last time," Branstad said. "I don't think candidates will spend the time or money to participate in a straw poll if they don't see any real benefit coming out of it."

Wilson suggested Bachmann's 2011 victory all but sealed the fate of the quadrennial event.

"She was an unsustainable candidate at the end of the day, and the straw poll gave her some oxygen that kept her in the race and frankly led to a sense of volatility in the GOP race," he argued.

Given that history, one member of the Iowa GOP's central committee who asked not to be named told CBS News that it was understandable that candidates were declining to participate this year. "If you were a major national political consultant for one of these campaigns would you really advise your candidate to show up in a corn field in Iowa in August with everything on the line and no opportunity to possibly come up with number one?"