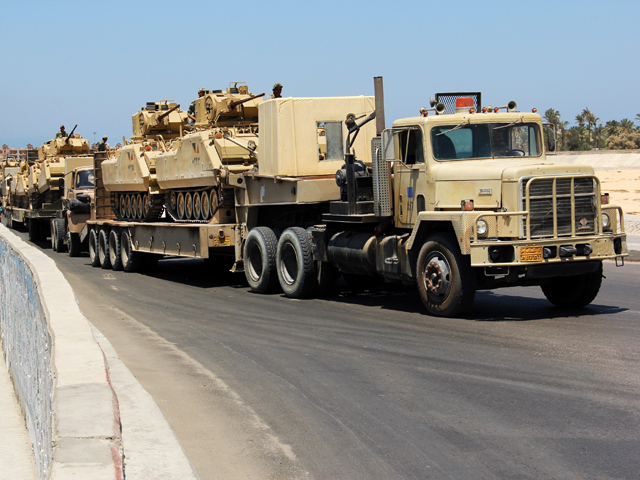 (AP) EL-ARISH, Egypt - Egypt said Saturday that it had arrested a high-level Islamist militant convicted of killing troops in the Sinai Peninsula, vowing to keep up military operations to "cleanse" the volatile desert region.

Officials said the military would soon issue a detailed report on its operations in the Sinai, now in their fourth week, that started after a brazen attack by extremists on a border outpost on Aug. 5 killed 16 soldiers.

The announcements seemed intended to offset reports that Egypt's Islamist president is using former jihadists to mediate with radical Islamists in Sinai, trying to ensure a halt in militant attacks in return for stopping the military offensive in the lawless peninsula.

The government has repeatedly tried to underplay talks of a tit-for-tat agreement, amid criticism that negotiations with radicals may give the hard-core Islamist groups a de facto recognition.

Egypt: Sinai offensive against militants goes on
Egypt to Israel: Our tanks needed in Sinai

"Operations proceed to cleanse the Sinai. There are geographical considerations among other things that determine the course of the operation ," said Yasser Ali, spokesman for President Mohammed Morsi. His comments were carried by the official state news agency.

Ali said that Defense Minister Abdel-Fattah el-Sissi will soon issue a statement detailing the operations and investigations into the Rafah border attack last month. Ali's comments came following a meeting between Morsi and el-Sissi in which they discussed the developments in Sinai.

As part of the continued operations, authorities said a joint force of police and military troops arrested Saturday a militant wanted for his alleged role in planning and carrying out deadly 2011 attacks on a police station and a bank in the Sinai.

Security officials said police and military forces captured Hamada Abou Shita after raiding his hideout in a Bedouin village in the Sheik Zweid district near the Gaza border before dawn.

An Egyptian court sentenced Abu Shita to death in absentia on Aug. 14 for his alleged part in last year's attacks. It is not clear if Abu Shita is also a suspect in the Aug. 5 Rafah attack on the border outpost.

The officials spoke on condition of anonymity because they were not authorized to speak to the press.

Presidential spokesman Ali also insisted had the right to use tanks in its military operation, dubbed "Operation Eagle," despite the 1979 peace treaty with Israel banning heavy weapons in a zone along the border.

Egypt had on Wednesday withdrawn some of the tanks it deployed near the Israeli and Gaza borders after the deployment brought complaints from Israel. Israel had quietly agreed to Egypt sending thousands of troops into the area — also barred under the treaty — to fight militants, but it had not consented to the tanks.

Ali denied that the tanks were pulled back because of Israeli or other outside pressure.

"The ongoing operations in Sinai are a purely national decision related to the nation's security, and whatever it needs and requires is above all else," he said. "Egypt has full right to impose security in Sinai regardless of the position of other parties."