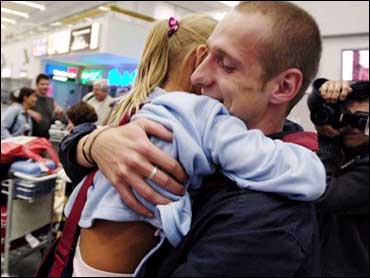 Police investigators said Monday that they were searching for six Pakistani men as the probe into the weekend's terrorist attack at this Red Sea resort widened.

Police were circulating photographs of the six, who have apparently been missing since several days before the attacks, at checkpoints in and around this southern Sinai resort city. An Associated Press correspondent who saw the images said the men appeared to be between the ages of 20 and 30.

The involvement of Pakistanis in the attack in Sharm el-Sheik would be unprecedented, as non-Egyptians have rarely been linked to attacks here. It would also be extremely difficult for a group of young Pakistanis not to be noticed in Sharm, one of the heaviest policed cities in Egypt and a favorite place of residence for President Hosni Mubarak.

An official at the Pakistan Embassy in Cairo said his embassy was in contact with Egyptian authorities over the issue of the missing Pakistanis.

"But they have not officially informed us that the Pakistanis are suspected of involvement in the bombing. They are only saying: 'We are searching for them. We cannot trace them,"' said Khalid Ahmed, a counselor at the Pakistani mission.

"It is very difficult for us to confirm whether any Pakistani was in Sharm el-Sheik but it is possible that someone may have been there. I have a strong belief that Pakistanis cannot be involved in terrorism here," he said.

But terrorism expert Jessica Stern told CBS News' The Early Show she would not be surprised if Pakistani terror groups were involved.

"I think that we know that for a long time Pakistani jihad groups have been working together with Egyptian groups as part of the international Islamic front," says Stern, author of "Terror in the Name of God,"

"So, even though it's unclear who is responsible, it would not be surprising if there's responsibility from both camps."

Many Pakistanis use Egypt as a route to travel to Europe to find jobs, he said. Last week, police arrested between 40 and 45 Pakistanis in the Mediterranean city of Alexandria for being illegal immigrants.

Police have detained more than 70 people in Sharm and other parts of the Sinai Peninsula during the investigation, which is also following different threads, including possible Palestinian involvement and whether the attacks were linked to last October's bombings in two other Sinai resorts.

The investigators, who spoke only on condition of anonymity because of the sensitivity of the inquiry, said they are looking into whether the six men had any involvement in carrying out Saturday's attack, Egypt's deadliest ever.

Police were to conduct DNA testing on the remains of a suicide bomber found in a car that rammed into the Ghazala Gardens Hotel in Naama Bay, the city's main tourist area, early Saturday. Two other blasts rocked a car park near the hotel and an area about three kilometers (two miles) away called the Old Market.

According to local hospitals, Saturday's pre-dawn bombings killed at least 88 people; Egypt's Health Ministry put the death toll at 64. Hospitals said the ministry count does not include a number of sets of body parts.

Two Britons and two Germans were killed, said a hospital official in Sharm, but their governments have not confirmed any fatalities. An Italian couple, an American and a Czech were also confirmed killed by their governments, while several Italians and Britons also remain unaccounted for.

The governor of South Sinai, Mustafa Afifi, told reporters during a Monday news conference held near the Ghazala that 17 non-Egyptians, including Westerners and citizens from other Arab states, were killed.

Afifi had no details on the Pakistanis being sought, but said investigators were not ruling out ties to the Taba attacks.

Afifi provided a run down of each of the three bombings, saying the Ghazala suicide bomber ran down and killed two security guards before crashing into the reception and detonating his explosives, which investigators have said weighed 660 pounds.

Shortly after, a backpack filled with explosives left by another attacker blew up near a car park and taxi rank close to the Ghazala, said Afifi, who suggested this might have also been a suicide attack.

The terrorist involved in the third blast in the Old Market had intended to attack a hotel, possibly the Iberotel Palace, said Afifi. But the attacker was stopped in a queue of cars at a nearby police checkpoint and got out of his pickup before it exploded, Afifi added. Police are investigating whether the culprit died in the blast or not.

If independently confirmed, any involvement of Pakistanis would suggest that those behind Saturday's bombings belong to a much wider terror network than previously thought.

Until the latest news broke Monday, suspicions had primarily focused on a Sinai-based network thought responsible for bombings in the area last October that also targeted tourist sites.

The involvement of the Pakistanis, if proven, would also increase suspicions that Osama bin Laden's al Qaeda may have been involved in the attacks. The Saudi-born bin Laden is popular among militant Pakistani groups and is known to enjoy support in tribal areas close to the Afghan border.

On Sunday, security officials said the bombers appeared to have entered Sharm in two pickup trucks loaded with explosives hidden under vegetables and that police were searching for three suspects believed to have survived the bombings. It was unclear if police were linking those three in any way to the six Pakistanis being sought.

Before the attacks, the militants rubbed serial numbers off the trucks' engines, the officials said. Such serial numbers had been a key clue Egyptian investigators had used to track down those behind similar vehicle bombings last October against two resorts further north in the Sinai Peninsula, Taba and Ras Shitan that killed 34 people.

Investigators were also examining whether the suicide bomber who set off the blast at the Ghazala was one of five suspects still at large from the Taba attacks.

Two rival claims of responsibility have emerged for the Sharm bombings, but neither statement could be authenticated. One was by the Abdullah Azzam Brigades of al Qaeda in Syria and Egypt, which also claimed responsibility for the Taba attacks. The other was by the previously unknown Holy Warriors of Egypt.