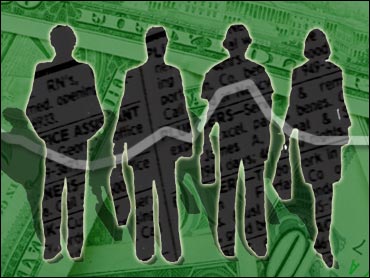 The U.S. economy, supported by solid business and consumer spending, grew in the closing three months of 2004 at an annual rate of 3.8 percent. It's expected to perform even better in the opening quarter of this year.

The reading on the gross domestic product, released by the Commerce Department on Wednesday, turned out to be the same as a previous estimate made a month ago.

Before Wednesday's report was issued, some economists were forecasting economic growth for the October-to December quarter of 2004 to be revised slightly higher to a pace of 4 percent. That would have matched the economy's growth rate in the third quarter of last year.

GDP, the broadest gauge of the economy's fitness, measures the value of all goods and services produced within the United States.

For the current January-to March quarter, the U.S. economy is expected to grow at a rate of around 4 percent or slightly faster, according to some analysts' projections. Economic growth probably will slow a bit in the April-to-June period but still be healthy, they said.

Feeling good about the economy's growth but concerned about the prospects of inflation taking off, Federal Reserve policy-makers at their March 22 meeting boosted short-term interest rates for a seventh time since last June, when the Fed's rate-raising campaign began.

Fed policy-makers also sent a strong signal that further rate increases were likely in the months ahead to combat unwanted inflation.

An inflation gauge tied to the GDP report and closely monitored by the Fed showed prices — excluding food and energy — rising at a rate of 1.7 percent in the final quarter of 2004. That was up from a previous estimate for the quarter and marked a big pickup from the 0.9 percent increase registered in the third quarter.

The Fed, at the March meeting, said the economy is growing "at a solid pace despite the rise in energy prices." Oil prices, which surged late last year and recently hit record highs, have retreated some in recent days.

The Fed also said that "labor market conditions continue to improve gradually." The overall economy has performed better than the jobs market, where progress at times has been uneven.

The economy added a sizable 262,000 jobs in February, the most since October. Analysts are hopeful that another 220,000 were created in March, when the government releases a new employment report on Friday.

President Bush wants to see the economy and the jobs situation on firm footing as he tries to sell the American public on his vision of overhauling the Social Security pension system. A cornerstone of his plan would allow workers to set up individual investment accounts in stocks and bonds, using a big chunk of payroll taxes to do that.

In the GDP report, consumer spending, the lifeblood of the economy, grew at a 4.2 percent rate in the final quarter of 2004. That was the same as a previous estimate for the quarter and down from a 5.1 percent growth rate in the third quarter of last year.

Some economists said they'll be looking closely to determine whether high energy prices make consumers and business cautious, something that could slow economic growth.

One measure of after-tax profits in the GDP report showed profits rebounding in the final quarter of 2004, growing by 12.5 percent, compared with a decline of 4.2 percent in the third quarter. Handsome profits should help companies cope with the impact of high energy prices as well as rising prices for other goods, including raw materials, some analysts said.