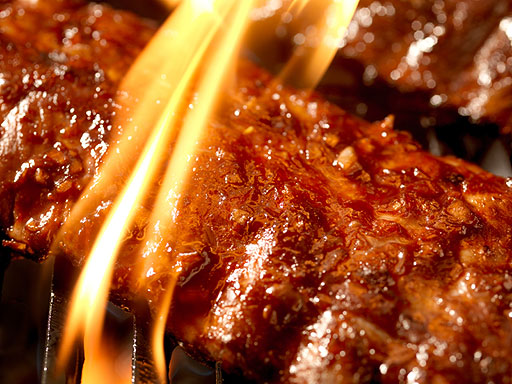 Eating BBQ or snacking on those fries may increase your chance of developing Alzheimer's, a new study suggests.

The culprit may be a chemical released when foods commonly found in U.S. diets are heated.

They're called advanced glycation end products (AGEs), which are proteins or lipids that when put in the presence of sugars, go through a process called glycation that makes cells stiffer and age faster. This can lead to chronic inflammation, and AGEs have previously been linked to diabetes and plaque buildup in arteries, otherwise known as atherosclerosis.

AGEs exist in small amounts normally in the body, but they are often consumed through food. They are especially abundant in meat and dairy products, and can increase when the food is cooked in high temperatures like when beef is grilled or fried.

For the study, mice were given a variety of different diets. Researchers saw that mice that ate more AGEs were more likely to have buildups of beta-amyloid protein plaques in the brain, a telltale sign of Alzheimer's disease. These mice were also observed having memory and motion issues, which were not present in mice that were not eating foods high in AGEs.

The researchers then took a group of 93 adults aged 60 and older, and gave them blood tests and asked them to complete a questionnaire that doctors use to test for dementia.

"The findings are very promising, but the question that needs to be answered is whether cutting down on glycotoxins can prevent or reverse dementia," study author Dr. Helen Vlassara, a professor of geriatrics and palliative medicine and experimental diabetes and aging at the Icahn School of Medicine at Mount Sinai in New York, told the Guardian.

She suggested in the meantime, instead of toasting bread or frying eggs for breakfast, people could eat plain bread or boil or poach their eggs.

"With meat, we recommend stewing and boiling, making sauces instead of exposing meat to very high dry heat," she added.

Derek Hill, a professor of medical imaging sciences at University College London, told the BBC that the results were interesting.

"Because cures for Alzheimer's disease remain a distant hope, efforts to prevent it are extremely important, but this study should be seen as encouraging further work, rather than as providing definitive answers," Hill said. "But it is grounds for optimism -- this paper adds to the body of evidence suggesting that using preventative strategies might reduce the prevalence of Alzheimer's disease and other dementias in society and that could have very positive impact on us all."

Other experts said the mice findings showed that AGEs were harmful, but more studies needed to be done on humans before making the same claims.

Koppel said that other factors like education and overall health had to be accounted for before extending the study findings. The researchers should also use more specific methods to test for mental prowess, instead of having subjects answer a questionnaire.

The research was published in PNAS on Feb. 24.