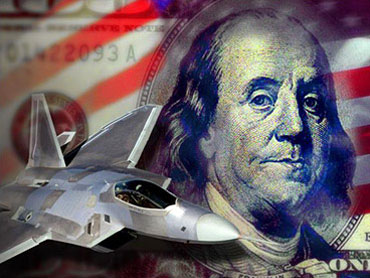 (AP)
Even as politicians decry pork barrel politics and complain of wasteful federal spending, both Democrats and Republicans have requested to insert billions of dollars in earmarks into a defense spending bill for companies that gave them millions in campaign contributions.

Before the subcommittee approved the bill, its members specifically requested more than $1.6 billion in earmarks for their campaign contributors, according to the nonpartisan watchdog group Taxpayers for Common Sense.

The group reports that all 18 members of the subcommittee requested funds for companies and organizations that donated money, either through employees or a political action committee, to their campaigns. Those entities donated nearly $1 million to the members.

The group's analysis was conducted before the subcommittee approved the spending measure -- and the bill must still undergo changes in the full Appropriations Committee and the full House, and then be reconciled with the Senate version. Still, the analysis reflects the official requests of the members.

"No matter what happens, these lawmakers literally signed on the dotted line that they thought the federal government should spend money on these projects," Taxpayers for Common Sense Vice President Steve Ellis told Hotsheet.

Of the 18 subcommittee members, Rep. Jim Moran (D-Va.) received the most in campaign contributions -- $201,100 -- from companies he requested earmarks for. Moran's district is home to a number of defense industry firms. He requested a total of 45 earmarks for companies like BAE Systems and General Dynamics, as well as organizations like Hampton University and Virginia Tech.

Subcommittee Chairman Jack Murtha (D-Pa.) received the second highest amount from potential earmark recipients that he listed support for, at $199,050. Murtha has long been the subject of scrutiny over earmarking. He was recently brought under investigation because of contributions he received from the now-defunct lobbying firm and earmark recipient, PMA.

President Obama in March was resigned to signing what he called an "imperfect" spending bill that was loaded with 8,500 earmarks.

Correction: An earlier version of this story said President Obama signed an "imperfect" stimulus bill. In fact, he referred to the omnibus spending bill as "imperfect," not the stimulus.