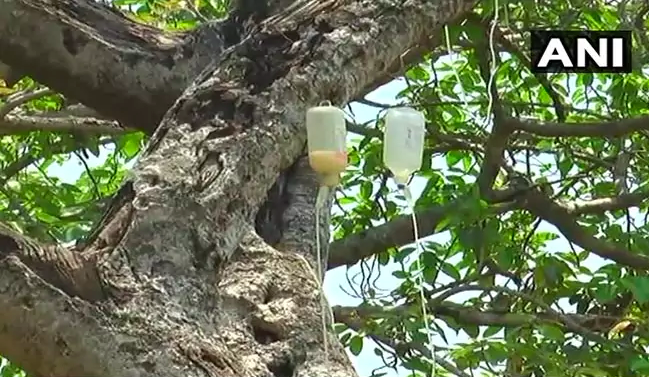 If you've ever visited a hospital, then you've likely seen IVs delivering fluids into the arms of sick patients. It's a sight most of us have witnessed countless times in our lives, but it's a safe bet that all of the patients we've seen receiving intravenous fluids have been human. That is, until now.

Officials in southern India have just hooked the world's second largest Banyan tree up to a saline drip in the hopes of saving its life. And now, the photos of the rescue attempt are going viral.

The 700-year-old ficus tree is a huge tourist attraction in Telangana, India, and according to the Times of India, its roots spread across three acres. The tree is known to locals as "Pillalamarri" or "Peerla Marri" because it has sprouted so many branches. In fact, it has become such a popular tourist attraction because all of those branches -- many as thick as trunks themselves -- now render it nearly impossible to see the tree's original trunk.

In December of 2017, however, after years of foot traffic and a rampant termite infestation, one of Pillalamarri's storied branches came crashing down amidst visitors, causing officials to shut the attraction to the public.

Since then, forest officials have tried various methods to rehabilitate the tree, bolstering its collapsing branches with concrete supports and administering a diluted mixture of the chemical Chloropyrifos to rid the giant ficus of its pest infestation.

Initially, on the advice of a retired forest oficial, the chemical solution was pushed into the tree through holes in its stem. However, that attempt failed and officials were forced to get more creative.

Now, hundreds of Chloropyrifos bottles hang from the tree's branches like saline drips, delivering the life-saving solution more directly into the sites of the problem.

"This process has been effective," Mahabubnagar District Forest Officer Chukka Ganga Reddy told the Times of India. "The tree's health is stable now. We are hoping it will become normal after a few days. We are also planning to open the site to the public after discussion with the higher officials, but [at] this time people have to see it from a distance away from the barricades.