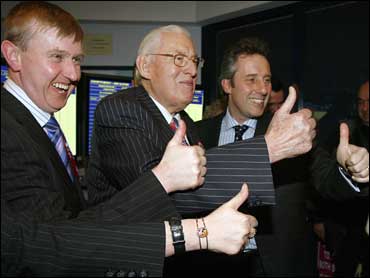 Hard-liners pulled ahead Friday in an election to decide who will control the Northern Ireland Assembly and hold the key to revived power-sharing in this British territory.

The Protestants of the Democratic Unionists and the Catholics of Sinn Fein appeared on course to strengthen their hold over each side of the assembly.

All winners from Wednesday's election to the 108-member assembly were expected to be confirmed Friday. Northern Ireland's complex system of proportional representation allowed voters to pick candidates in order of preference and required ballots to be recounted several times.

At stake is achieving the central aim of the Good Friday peace accord of 1998: an administration drawn equally from the British Protestant majority and Irish Catholic minority that can govern Northern Ireland in stability and a spirit of compromise.

If his party gets the most votes, Democratic Unionist leader Ian Paisley could claim the top power-sharing post of "first minister." Sinn Fein deputy leader Martin McGuinness would be his party's candidate for "deputy first minister," a position with equal powers despite its title.

The moderate parties that led the previous administration — the Catholics of the Social Democratic and Labour Party, or SDLP and the Protestants of the Ulster Unionists — were expected to finish in third and fourth place. They would receive two posts each in the next 12-member administration.

Of 72 seats declared, the Democratic Unionists had won 25 and Sinn Fein 24 as ballot-counting resumed Friday. Both parties scored their biggest shares of the vote in Northern Ireland history.

The Democratic Unionist Party, which received 30 percent of first-preference votes, faced immediate pressure from the British and Irish governments to cut a deal with Sinn Fein, which received 26 percent.

"The message of the electorate is clear," they said in a joint statement. "After so many years of frustration and disappointment, they want Northern Ireland to move on to build a better future together..."

Blair and Ahern, who have spent a decade closely cooperating on Northern Ireland, insist the new assembly must form an administration by next week, so that Britain can transfer control of 13 government departments to Belfast by March 26.

If that deadline is missed, Britain has promised to disband the assembly the following day, effectively giving up on a decade of toiling to deliver a power-sharing system.

But Paisley dismisses the deadline as a bluff and has not committed to cooperating with Sinn Fein, which for decades supported the IRA's failed 1970-1997 campaign to force Northern Ireland out of the United Kingdom and into the Republic of Ireland.

Paisley has soared in Protestant popularity on a platform vowing never to work with Sinn Fein unless the IRA disbands and Sinn Fein accepts British law and order.

Sinn Fein leader Gerry Adams — who wants his party to gain power in both Northern Ireland and the Irish Republic, which faces its own parliamentary elections in mid-2007 — has come close to delivering Paisley's demands.

The IRA renounced violence and surrendered its weapons stockpiles in 2005. International experts last year said the outlawed group had stopped recruiting and training members, and disbanded units responsible for military planning, such as smuggling and designing weapons.

But the Democratic Unionists say Sinn Fein remains unwilling to help police solve certain kinds of crimes, particularly those involving members of the IRA and other anti-British paramilitary groups.