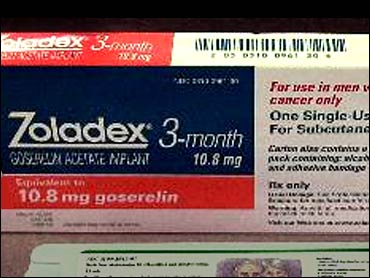 AstraZeneca Pharmaceuticals pleaded guilty Friday to violating a federal drug marketing law and will pay $355 million to settle allegations of illegal pricing and marketing of a prostate cancer drug.

The company gave samples of the drug Zoladex to urologists, who then submitted claims for payment for the prescriptions to Medicare, Medicaid and other federally funded insurance programs. The claims created a loss of nearly $40 million for those programs.

"That's why it's appropriate to resolve this case with a corporate guilty plea," Andrews said.

AstraZeneca said in a statement that it accepted responsibility for "any improper sampling conduct that took place in the mid-1990s and have taken steps within our new company to prevent such activities from happening again."

AstraZeneca said it had put "robust" training, compliance and accountability policies in place for all employees.

"We are committed to an ongoing, cooperative effort with the government towards ensuring that we market our drugs with the highest ethical standards and respect for the law," the company said.

The Food and Drug Administration said AstraZeneca engaged in a "massive conspiracy" by illegally pricing and marketing Zoladex.

"FDA will not tolerate criminal conduct that exploits patients, plunders the national treasury, and adds to the cost of health care," said FDA Commissioner Mark B. McClellan.

The FDA said AstraZeneca employees used several illegal methods to stimulate demand for Zoladex. In addition to giving Zoladex to physicians who charged patients and insurance programs for the samples, the FDA said the company inflated the price of Zoladex reported to Medicare as the basis for reimbursement while deeply discounting the actual price charged to the doctors.

The company previously noted in its 2002 annual report and in a filing with the Securities and Exchange Commission that it had set aside $350 million to cover the costs of an expected settlement of the case.

As part of a plea agreement, AstraZeneca agreed to pay a $63.9 million criminal fine for violating the Prescription Drug Marketing Act.

AstraZeneca also agreed to pay the federal government $266 million to resolve allegations that the company caused false and fraudulent claims to be filed with the Medicare, TriCare, Department of Defense and Railroad Retirement Board Medicare programs as a result of its fraudulent drug pricing schemes and sales and marketing misconduct, according to the U.S. Attorney's Office.

The company will pay another $24.9 million to the federal government and the states to settle civil liabilities to the Medicaid program regarding the allegations that it caused false and fraudulent claims to be filed with the states as a result of pricing and marketing misconduct.