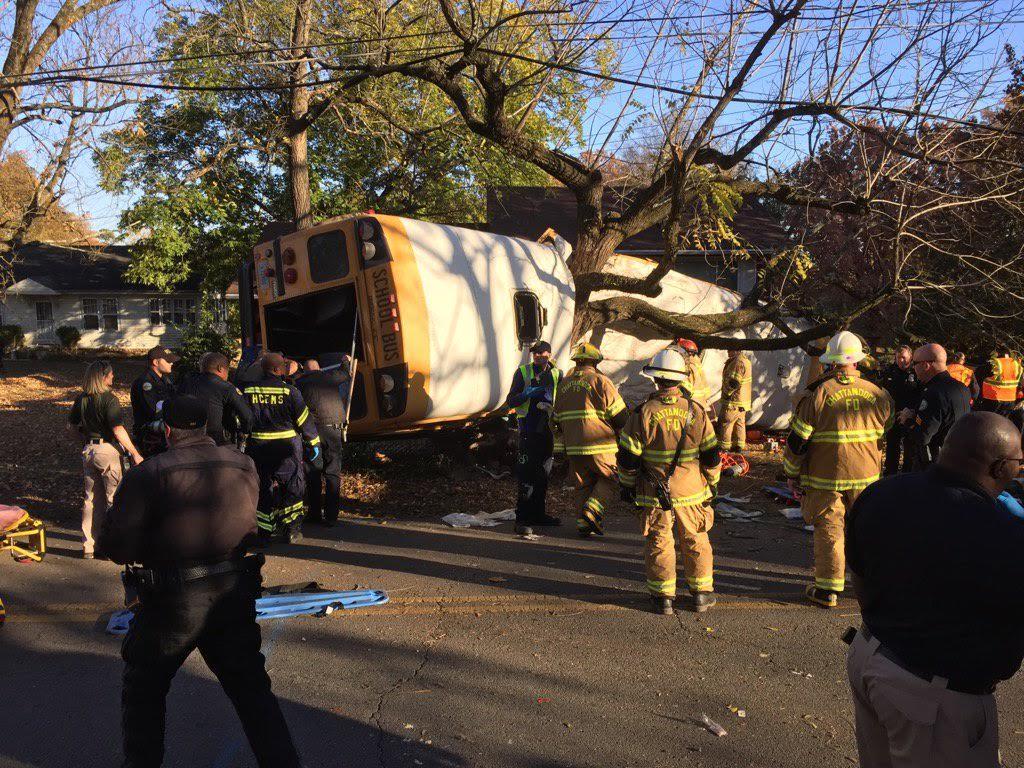 CHATTANOOGA, Tenn. -- The driver of an elementary school bus involved in a deadly crash Monday has been arrested, Chattanooga Police Chief Fred Fletcher told reporters in a nighttime briefing.

Families of the dead children have been notified, he said, but their names haven’t been -- and won’t be -- released.

CBS News correspondent Mark Strassman reports a mom who had three kids on the bus, one of whom died, said that just before crashing, the driver said something to the effect of “Is everyone here ready to die?” and then seconds later, the bus was on its side and five kids were killed. The mom said she had complained repeatedly about the driver’s behavior before the accident, but no official responded.

At a press briefing Tuesday morning, Hamilton County schools interim Superintendent Kirk Kelly said 3 of the students who lost their lives were in the fourth grade, 1 was a first-grader and the fifth was kindergarten. Six students still in the hospital were in the Intensive Care Unit, Kelly said.

Twenty-four students were taken to hospitals, Fletcher said, but he didn’t have information about the extent of their injuries. Media reported it took about two hours to get the last children off the bus.

Bloodied students lay on stretchers, while other children walked away dazed with their parents after the crash.

The bus was carrying 35 children from Woodmore Elementary School, authorities said. The students in kindergarten through fifth grade, when it crashed about 3:30 p.m., turned on its side and wrapped around a tree.

Fletcher earlier said police were looking at speed “very, very strongly” as a factor in the crash. The bus was the only vehicle involved but the crash scene covers a significant area, he said.

One student who was on the bus told CBS Chattanooga affiliate WDEF-TV the driver “wasn’t paying attention and was going real fast.”

The National Transportation Safety Board tweeted that a team would be heading to Chattanooga Tuesday morning to investigate.

A warrant has been issued to remove the black box from the bus and review the evidence on the video camera or cameras from the vehicle, Fletcher said.

WDEF says  people lined up to donate blood, and some donors were asked to make appointments for Tuesday.

Kelly, the interim superintendent for Hamilton County schools, said classes would be held Tuesday, with grief counselors available for students and staff.

“Our hearts go out, as well as the hearts of all these people behind me, to the families, the neighborhood, the school, for all the people involved in this, we assure you we are doing everything we can,” Fletcher said.

At the state Capitol in Nashville, Gov. Bill Haslam called the crash “a tragic event” and offered assistance.

“We’re going to do everything we can to assist in any way,” Haslam said. “It’s a sad situation anytime there’s a school bus with children involved, which there is in this case.”