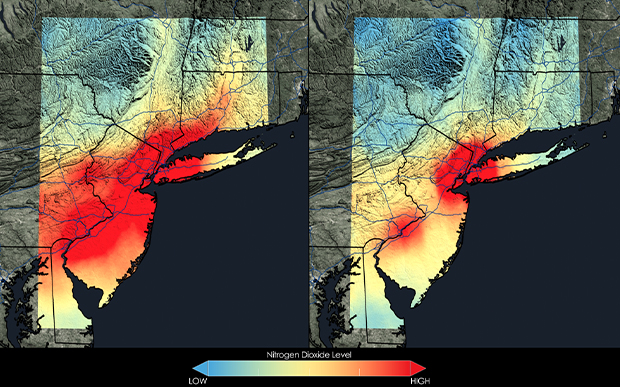 If Americans are breathing easier than they were a decade ago, these new NASA satellite images may help explain why. They show -- in vividly color-coded maps -- that levels of nitrogen dioxide, an important air pollutant, have plummeted across the country over the last decade.

The data comes from a NASA satellite called Aura, which launched in 2004 with the Ozone Monitoring Instrument (OMI) to measure pollutants in columns of air. Goddard data visualizers then plotted the concentrations of various pollutants in each column over a map of the U.S., and in more detail over a number of cities, comparing data collected from 2005 to 2011.

Duncan told CBS News: "The Aura satellite happened to be collecting data at the right time to witness this huge reduction in air pollution in the U.S. -- about 40 percent on average for nitrogen dioxide."

Most nitrogen dioxide is generated by cars burning gasoline and power plants burning coal. Over the past decade, technologies for improving gas mileage and scrubbing nitrogen dioxide and other pollutants out of power plant exhaust towers have been implemented across the country.

Nitrogen dioxide can impact the respiratory system, and it also contributes to the formation of other pollutants including ground-level ozone and particulates.

"Ozone is nasty stuff," says Duncan. "It is highly reactive. When you breathe it in, the ozone reacts with the lung tissue and burns it." According to the EPA, ground-level ozone levels have also decreased over the same period.

America's air quality still has room for improvement. According to the American Lung Association's 2014 State of the Air report, "147.6 million people -- 47 percent of the nation -- live where pollution levels are too often dangerous to breathe, an increase from last year's report."

Duncan notes that lower levels of nitrogen dioxide and other air pollutants are detected over the weekends when fewer cars are on the road. And the EPA has reported a slight rise in ozone since 2011. Still, NASA notes on its Web site that overall "[a]ir pollution has decreased even though population and the number of cars on the roads have increased."

Duncan thinks this is a rare opportunity to share good news. "Americans think our air quality is getting worse, but quite the opposite is true."