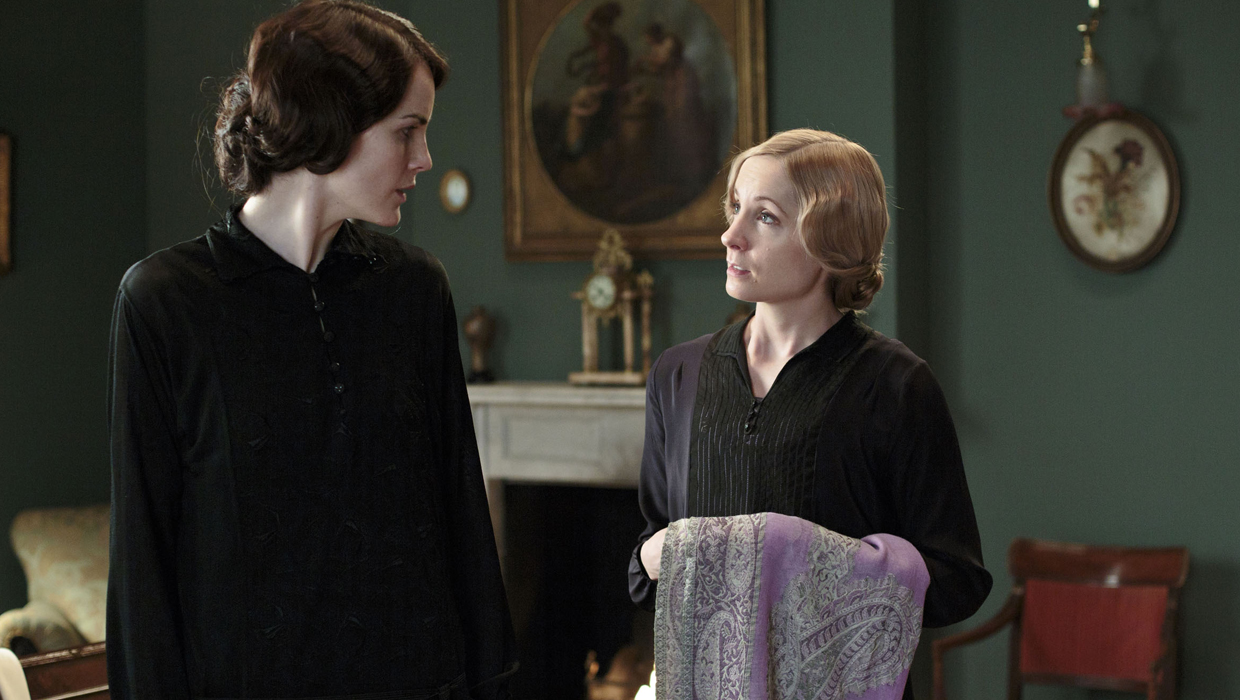 As it returns for its much-awaited fourth season, "Downton Abbey" remains a saga about elegance, tradition and gentility -- and the pressures of preserving them.

On the premiere, airing Sunday at 9 p.m. ET on PBS, Lady Mary Crawley has buckled under the weight of widowhood six months after her husband, Matthew, perished in a car crash. Inconsolable at the start of the episode, Mary (played by Michelle Dockery) dismisses their infant son as "a poor little orphan."

Her father, Lord Robert Crawley (Hugh Bonneville), wrestles with business pressures: the death of Matthew and the absence of a will have thrown the Downton manor, already financially fragile, into further crisis.

There will be plenty of new characters introduced into the mix, too. This season, viewers will meet Tom Cullen, who plays Lord Gillingham, a childhood friend of the Crawleys who serves as a potential new love interest for Lady Mary. Julian Ovenden plays Charles Blake, who works for the government and "immediately gets off on the wrong foot with Lady Mary," the actor says. There are also two performers coming on the scene -- Gary Carr portrays a singer named Jack Ross, the first black character to appear on the series, and Dame Kiri Te Kanawa plays Dame Nellie Melba, who Fellowes says was "the great opera star of that period."

Meanwhile, the modern world of 1922 bears down on the Downton hidebound. Just consider the encroachment of an electric mixer, the newest threat to the culinary status quo over which Mrs. Patmore reigns in the kitchen.

Even so, Mrs. Patmore remains squat, high-strung yet unbending under the pressures of keeping the Downton nobility well-fed.

In a recent interview, Lesley Nicol, who plays her, recalls filming the series' original episode with Mrs. Patmore "shouting at everybody and being horrible. As an actor you go, 'Is she just a plain, nasty piece of work?'"

But Nicol says she was set straight by the series' historical adviser, who reminded her that the character is "solely responsible for the food in that house. If you go to dinner at Downton, it's got to be the best you've ever had. Sometimes people are harsh because they need things to be right."

That was a key ingredient for playing Mrs. Patmore, but the recipe keeps the pressure on Nicol to look authentic doing it, because "viewers are looking for mistakes — they are!"

With a lifetime of credits that include the musical "Mamma Mia!" and the films "East Is East" and its sequel, "West Is West," Nicol must rely on her acting chops to be convincing as a cook, because (she readily confesses) she isn't one in real life: While her husband likes to throw dinner parties, "I'm front-of-the-house," she explains with a laugh. "I do the talking and the pouring of the drinks."

It's no secret that "Downton Abbey" has dined out on startling success from almost the first moment it hit the air in Britain in 2010 (three months before its U.S. debut).

It has gained a firm foothold in the culture, won 10 Emmys and two Golden Globes, and found a robust audience that rose to the challenge of calling it "Downton," not "Downtown." Last season's finale drew 8.2 million U.S. viewers, most of them left shattered by Matthew's demise as they faced the long wait to see how the "Downton" elite and underclass would cope.

In November there was a bit of good news for rabid fans with the announcement that, yes, next year there will be a fifth season. That news freed viewers to fret about their favorite show's fate beyond 2015: How many years will "Downton" carry on?

Just ask "Downton" executive producer Gareth Neame. Everybody else has.

Neame is the managing director of London-based Carnival Films and a "Downton" executive producer who, a few years ago, put the show in motion over dinner with Julian Fellowes, the Oscar-winning writer of the 2001 murder mystery "Gosford Park."

Neame was a fan of that ensemble drama, set at an English country house in the 1930s where a party of wealthy Brits and their servants convened for a shooting weekend. He proposed that Fellowes create a series with the same social stratification, politesse and melodrama. Its starting point was rolled back to the eve of World War I.

With Carnival (whose credits include such series as "Jeeves and Wooster," ''Traffik" and "Whitechapel") set to produce, Neame sold "Downton" to the British commercial network ITV.

"I wanted to position the show on a very broad mainstream entertainment channel," he says. But in the U.S., no commercial networks were biting (ironically, not even NBC, whose parent company owns Carnival Films). Neame found a buyer instead in public television's "Masterpiece" anthology.

But it goes without saying the series caught on far beyond that — in more than 200 countries.

"They're crazy for it in China," marvels Nicol, who found out firsthand on a visit there: "I've seen me speaking Mandarin!"

"The show is everything I'd hoped for, times 100," says Neame. But when success is multiplied, so, often, is accompanying pressure. "There's such an insatiable demand for the show. So much is expected of it!"

Neame works closely on the story lines with Fellowes, whom he credits as "the sole writer and the creator of the show" while describing his own role as "ultimate custodian of the whole thing.

"Julian and I are making the show we want to make," he says. "It's our cup of tea. We make it for us, and then, hopefully, people will come along."

But at some point in the not-too-very-distant future, those people will be forced to say goodbye. Then Lady Mary, Lord Robert, Mrs. Patmore and the rest will be consigned to viewers' memories (and reruns, of course).

"There are only seven stories," says Neame, citing a familiar literary thesis, "and I think the challenge with a long-running TV show is to retell those seven stories without anyone noticing. But there could come a time where we'll be going, 'What do we do now?' And I don't want to get to that place.

"I think the show is in very good health at the moment," he declares. "But people should enjoy it while it's there. It won't be there forever."