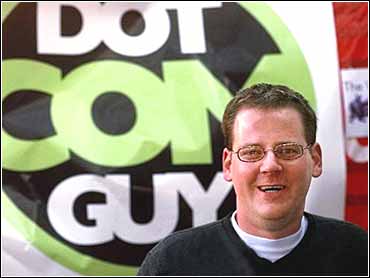 You may remember him as the Dallas man who legally changed his name from Mitch Maddox and lived all of 2000 inside his house.

His goal was to prove a point that you don't need anything but a computer and a credit card.

He never ventured past his tiny backyard for a year, and bought all his home furnishings and necessities online.

Twenty cameras followed his every move and broadcast it to the world on the Web.

The house DotComGuy lived in came from corporate sponsors that hoped he would encourage others to use cyberspace more for everyday transactions.

DotComGuy says he was bored at times, but the year passed quickly as he answered e-mails and questions from reporters and Web site viewers.

DotComGuy left his house early Monday, shortly after midnight. He spent his first day of freedom at a private gathering at his father's house, where he surprised everyone by asking Crystalyn Anne Holubeck to marry him.

The two met in a chat room on DotComGuy's Web site. But she won't be known as Mrs. DotComGuy — He's changing his name back to 'Mitch Maddox.'