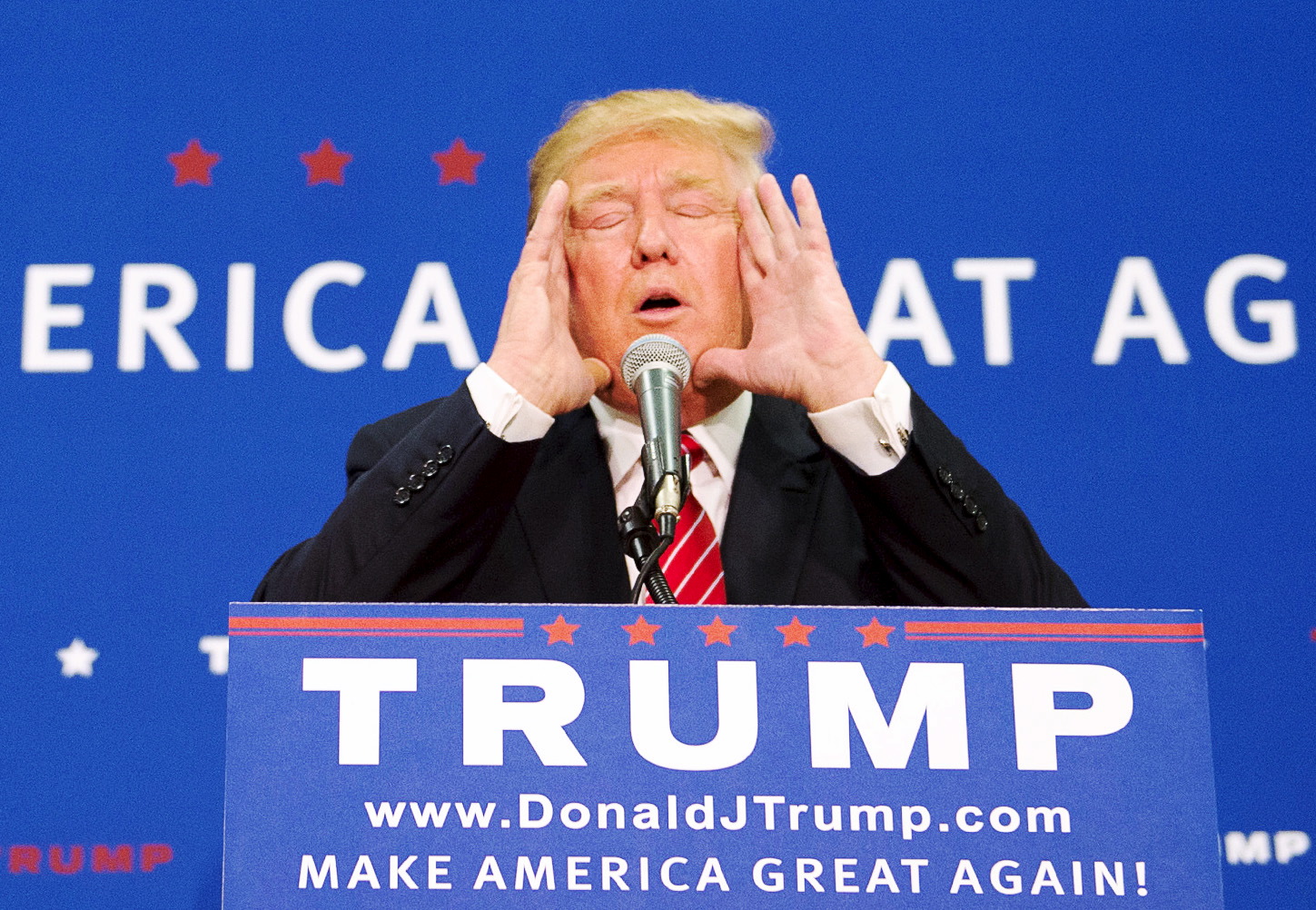 "They hate each other," Trump said of his rivals for the Republican nomination. "They hate, trust me I know. They hate so much. They hate more than anybody in this room hates their neighbor. But it's political bullsh*t, do you understand? It's true."

The campaign rally in Keene was Trump's first trip back to New Hampshire since his controversial town hall in which a man claimed President Barack Obama was a Muslim. Trump elected not to correct the man and ignited a firestorm.

Trump said that he would be releasing his fourth position paper on how to reform the U.S. Department of Veterans Affairs, though he didn't announce the timing. The Syrian refugees that the Obama administration is welcoming into the U.S. would not be allowed to stay if he's elected, Trump said. They would be deported along with the more than ten million undocumented immigrants already in the United States.

It was a packed house. The gymnasium at Keene High School was packed to the rafters with about 2,400 people, as was an auditorium that held an overflow crowd, which Trump addressed after.

A large share of Trump's speech focused on his new tax plan, which he characterized as "Reaganesque."

Reading from a piece of paper, Trump outlined specifics from his plan, saying, "The plan will provide major tax relief for middle income and most other Americans. It'll totally simplify the tax code. It'll grow the American economy. All of this will add up to a point where we're not going be increasing our debt."

But the conservative Tax Foundation's analysis found that the plan would, in fact, add more than $10 trillion to the national debt, while adding 11 percent to the gross domestic product long term, if the tax cut "could be appropriately financed."

24-year-old Keene resident Arielle Buckley, an administrative assistant at a non-profit, said that while she is a supporter of Trump, she would've liked to see more specifics of Trump from the speech.

"I liked it but I also feel like there was a lot of stuff left out," Buckley said. "I still want a lot more details about things. There was more of an overview. I want more gritty details. But the ideals are awesome."

Buckley is also considering throwing her support to the candidate who is Trump's polar opposite: Vermont Senator Bernie Sanders, who is a socialist.

"Bernie Sanders has a lot of great ideas, but again, it's with a lack of details. He has all these great plans."

When asked about Trump and Sanders being ideological opposites, Buckley said, "Yes, at the same time, kind of not. I grew up poor. The whole income tax thing, I just learned about that a few ago. At the same time, I just talked to my boss at work about it. She's middle class and said, 'That doesn't help me at all.'"

After his speech, Trump responded to 2012 Republican nominee Mitt Romney, who slighted Trump earlier Wednesday at the Ideas Forum in Washington.

"I will support the Republican nominee. I don't think that's going to be Donald Trump," Romney said. "My party has historically nominated someone who's a mainstream conservative."

"Well, Mitt feels badly because I've been hard on him," Trump said. "He lost, he choked. He shouldn't have lost. That was an election that should've been - he choked. And I told everybody. You cannot let that happen. He can't feel good about that. I told the truth. Mitt Romney really choked and should've won that election."

It's that brash style that endears him to his supporters, to a point.

Joan Punt, from Walpole, New Hampshire, came to the speech because she wanted to "see him in action." She wore the red "Make America Great Again Hat" that is popular at Trump rallies.

"He says what everybody else is thinking," Punt, a longtime nurse said. "I want to make America great again, I really like his slogan. That's kind of attracted me. However, he's a little abrasive. Somebody needs to tell him to stop talking down to people because it never works."

It should be noted that Punt mentioned Rubio - who's been the main victim of Trump's insults lately - as her second choice.