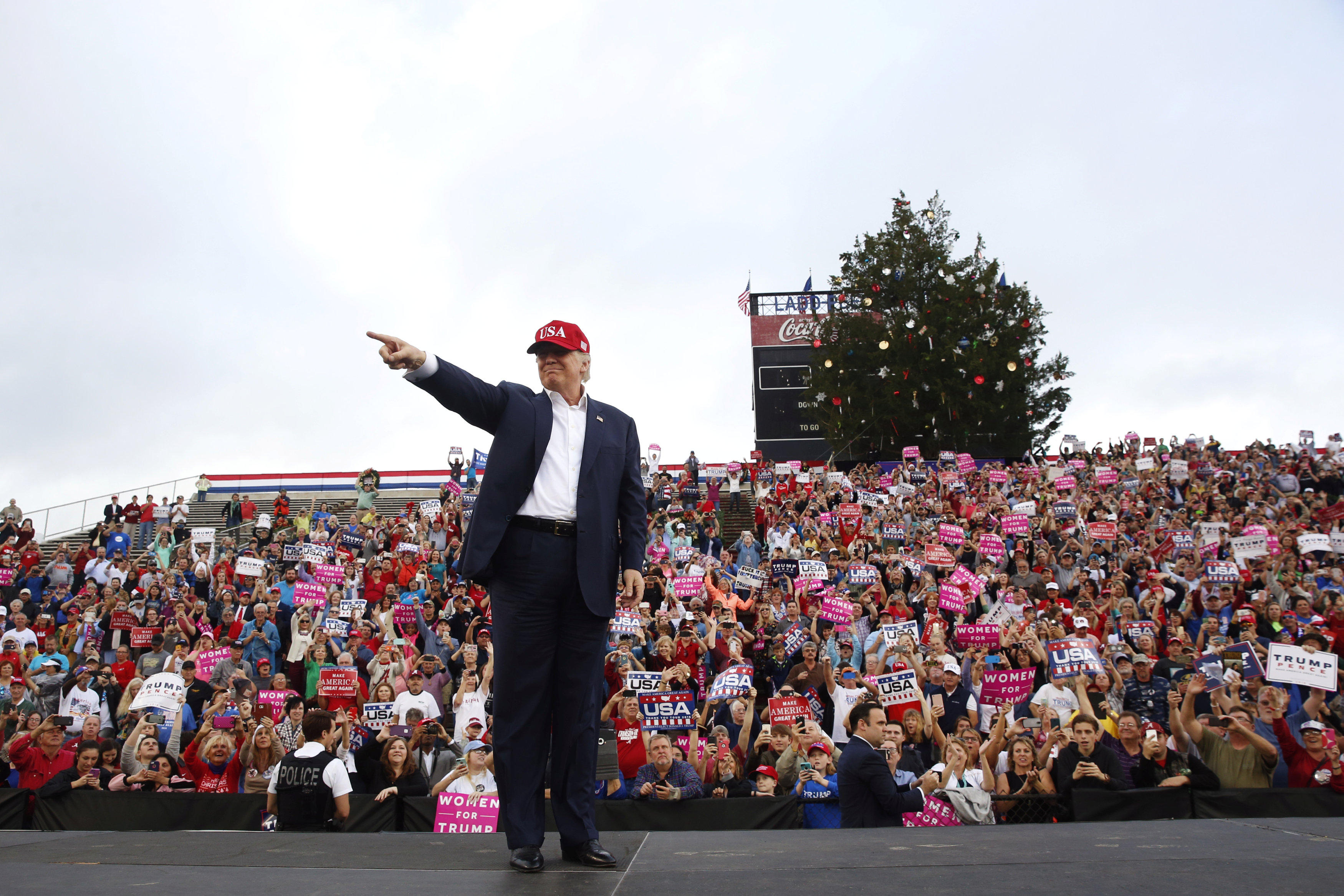 President-elect Donald Trump took his last bow Saturday in Mobile, Alabama, concluding his victory tour with a final look back at his campaign trail triumphs, an election night tick-tock and a promise to focus on an economic agenda that “can be summed up in three very beautiful words: jobs, jobs, jobs.”

“There is no better place to celebrate than right here,” the president-elect told a crowd in Mobile, saying that the Alabama city was “where it all began.”

Amid intermittent cheers of “Trump! Trump! Trump!” the president-elect crowed his approval of the state, saying voters “propelled” the campaign to “a historic win for the American worker and the American people.”

The president-elect relived what he counted among his campaign’s greatest hits, including his defeat of third-party candidate Evan McMullin in Utah, his scant spending on political advertising and the frenetic pace of his rallies in the home stretch of the election.

“I don’t think anyone’s worked harder in the last months of a presidential campaign,” Mr. Trump said, referencing himself.

But the spotlight wasn’t all on the president-elect.

Mr. Trump also brought out a parade of surrogates during his own speech, calling to the stage Kellyanne Conway, his former campaign manager and now a top adviser to his transition team. (She told rally-goers that the president-elect had won “over 2,600 counties” and 306 electoral votes.) He also had spokeswoman Hope Hicks join him at the podium (she smiled and wished the crowd a “Merry Christmas!”) and, earlier, his first Senate backer, Jeff Sessions, took over the mic.

Later, Mr. Trump gave his account of Nov. 8, claiming that halfway through election night he wanted to switch venues with Hillary Clinton’s campaign, which had rented out a convention center on the west side of Manhattan.

“I took sort of a small ballroom because if I lost, I wanted to get out,” Mr. Trump jokingly explained. He added that his campaign had even offered to buy the fireworks ordered by the Clinton team because “I found fireworks just don’t work when you lose.”

The last stop on what was billed as a “Thank You” tour, Mobile was an appropriate place for the president-elect to reminisce on his year-and-a-half long journey to the White House: It was in the state where Mr. Trump won one of his largest margins of victory, where Sessions (now his attorney general pick) first publicly jumped aboard the “Make America Great Again” train and where, as the president-elect said, people began to think “something was really going on there.”

But the jaunt through Mobile was also an attempt to look toward Jan. 20, his inauguration, and the four years to come.

“We’re going to go back to the old days,” the president-elect said, with an economic agenda that included the promise to “buy American and hire American.”

“Made in the USA, remember?” he asked.

Mr. Trump once again promised to build “a great wall” that would stop illegal immigration “for good.” He added, however, that “we will have doors in that wall,” where people can come through -- legally -- “by the tens of thousands.”

The president-elect did not address the latest reports of Russia hacking during the U.S. election season.

At the conclusion, Mr. Trump addressed first lady Michelle Obama’s recent remarks about a hopeless America, pushing back on the notion and saying “we have tremendous hope.”

“I actually think she made that statement not meaning it the way it came out,” he said, referring to an interview with Oprah Winfrey that’s scheduled to be broadcast Monday.

“Now we’re feeling what not having hope feels like. You know? Hope is necessary. It’s a necessary concept,” Mrs. Obama told Winfrey in a clip released in advance. “And Barack didn’t just talk about hope because he thought it was just a nice slogan to get votes. I mean, he and I and so many believe that if you -- what else do you have if you don’t have hope?”

The president-elect countered that by saying of his administration and the country as a whole: “We have tremendous potential.”

“We are going to be so successful as a country again,” he vowed.