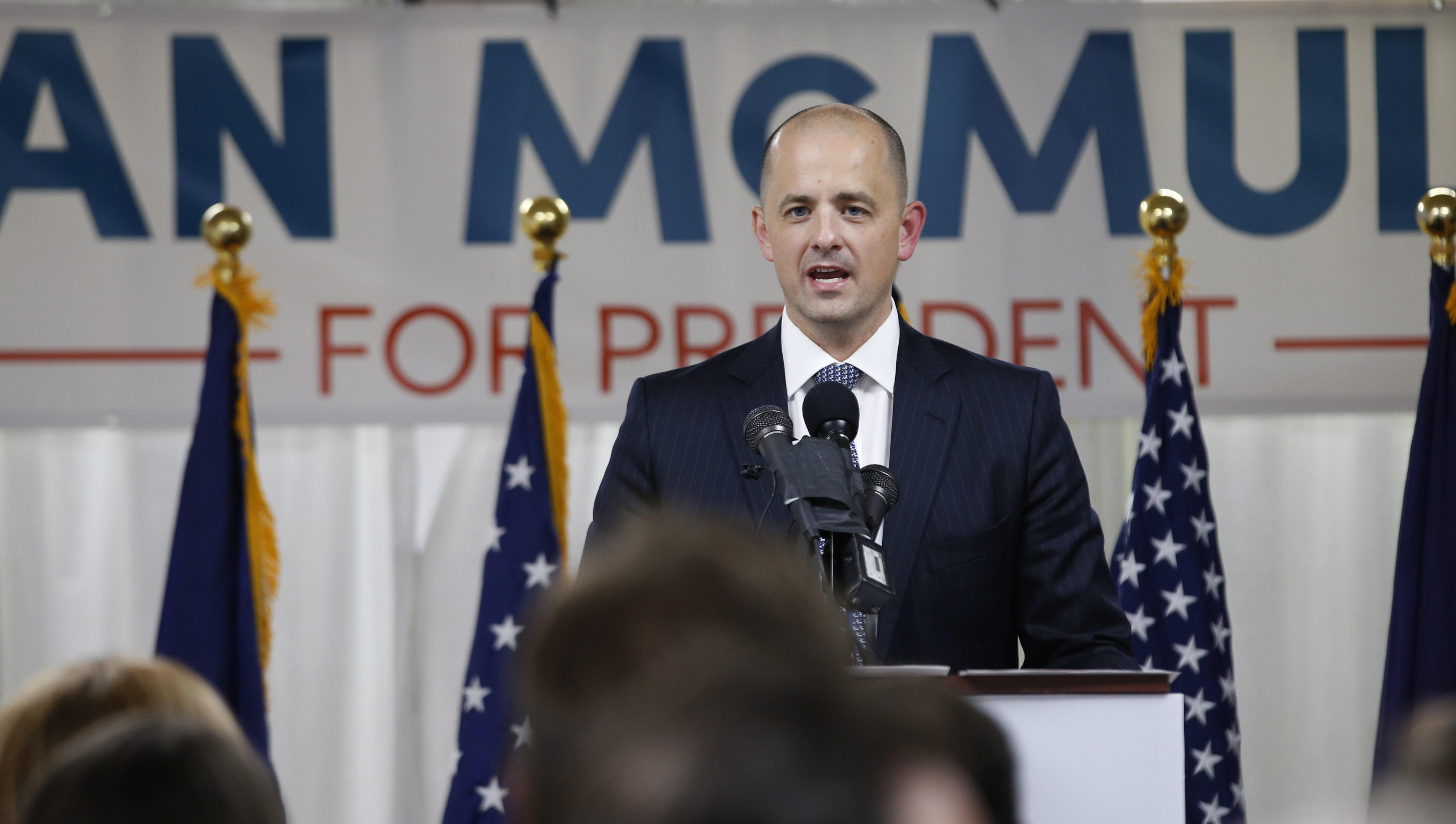 SALT LAKE CITY -- Two months after he jumped into the presidential race as a political unknown on the fringe, independent candidate Evan McMullin is surging in the polls in Utah and drawing large crowds at rallies as he becomes the conduit for conservative voters fed up with Republican Donald Trump’s crudeness and antics.

The Republican stronghold of Utah is suddenly a toss-up state amid widespread rejection of Trump, with polls showing McMullin closing in on the Republican nominee and Democrat Hillary Clinton. It means that Utah may do what seemed unthinkable: Elect a non-Republican presidential candidate for the first time since 1964.

Though McMullin is only on the ballot in 11 states, there’s even talk of the 40-year-old becoming president in a wild, exceedingly unlikely scenario in which neither Trump or Democrat Hillary Clinton gets enough electoral votes and Congress is left to decide.

McMullin’s stunning ascent into relevancy has everyone asking: Who is this guy?

Born in Provo, Utah - the heartland of Mormon country - McMullin spent his childhood in a rural area of Washington out of Seattle. He did a two-year Mormon mission in Brazil and then returned to Utah to earn a degree in international law and diplomacy at the Mormon church-owned Brigham Young University.

He spent 11 years in the CIA doing counter terrorism work before leaving the agency to get a master’s in business administration from the Wharton School of Business and have a brief stint in investment banking. He later became a national security adviser for the House Committee on Foreign Affairs.

He was working as the chief policy director for U.S. House Republicans as he watched with amazement as Trump won the GOP nomination and no other conservative jumped in the race. By late summer, he realized he would have to run to give conservative voters an alternative to Trump and Clinton. Despite knowing he would endure ridicule and questions about his motives, McMullin went for it.

McMullin is hopeful he can win Utah and make a dent in neighboring Idaho and Wyoming. But even if he doesn’t win any state, he said he’s already accomplished part of what he set out to do.

McMullin is scheduled to host a rally Friday night in a Salt Lake City suburb before making campaign stops in Idaho and Colorado in the coming days.

Damon Cann was a roommate of McMullin’s for three months in 1999 when they lived together at BYU housing in Virginia. Cann, now a Utah State University political scientist, remembers McMullin being an ambitious young man with a high motor who was very excited about starting his career in the CIA, taking very seriously all the agency rules. He even insisted on reporting an encounter with foreigners from across the hall who gave them cookies, Cann remembers.

Handicapping this year’s race, Cann said McMullin has seized the opportunity created by the unpopularity of Trump and Clinton by persuading voters he’s a better option than Libertarian candidate Gary Johnson, whose policies don’t quite jibe with Utah’s culture. That includes being pro-choice on abortion and accepting the legalization of gay marriage.

His choice of a woman as his running mate, Republican campaign strategist Mindy Finn, is just one part of his campaign that has endeared him to Utah voters, especially young Mormons, Cann said.

“People tend to have a higher level of social trust for people who are in the same group,” Cann said. “LDS people find Evan McMullin to be trustworthy on the account he shares their religious identification.”

McMullin downplays the role his religion is playing in his ascent.

“It’s about principles. They’re not only Mormon principles, they are the principles of millions of Americans,” McMullin said. “I am the only true conservative in this race.”

Matthew Burbank, an associate professor of political science at the University of Utah, predicts Trump will narrowly win the state, making McMullin mainly an interesting historical footnote similar to Ross Perot’s 1992 showing in Utah when he finished second to George H.W. Bush but ahead of Bill Clinton.

But he’s among those impressed by how well McMullin has maneuvered this year’s bizarre political landscape to earn widespread attention. McMullin’s strategy to stake out general, conservative ideas seems to be working because most voters aren’t looking for detailed plans about what he would do as president because they know that’s not realistic.

“He’s primarily a symbolic conservative,” Burbank said. “As long as he holds that position, some Utah voters will look at that and say, ‘I’d rather vote for him.’”