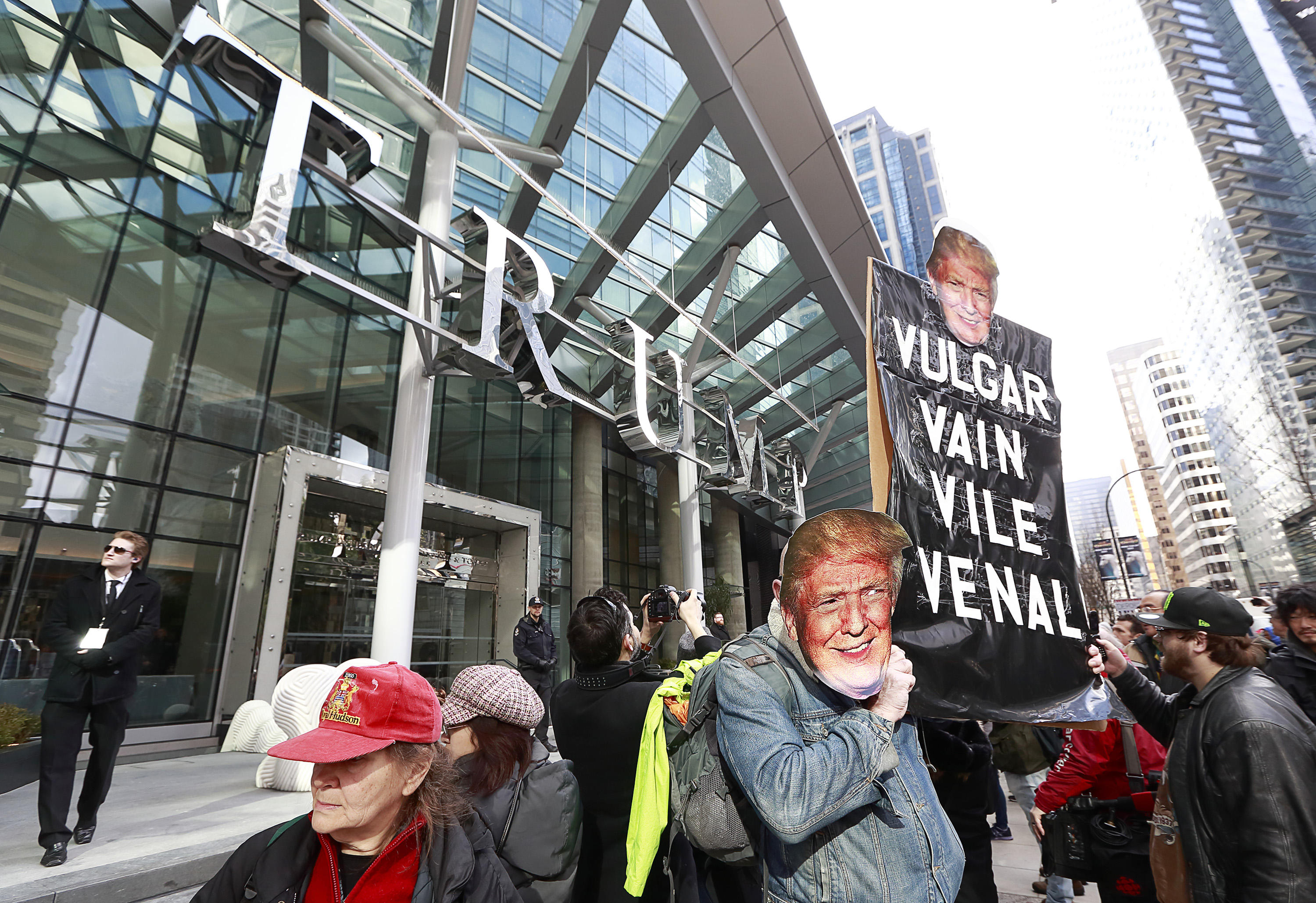 VANCOUVER, British Columbia -- Ignoring protests, claims their newest real estate venture clashes with Canadian values and a no-show mayor who tried to change the tower’s name, President Trump’s sons said Tuesday that it was “so fitting” to see the Trump brand in Vancouver, a city known for its diversity and progressive politics.

Protesters, some carrying posters proclaiming, “Love Trumps Hate,” surrounded the entrance to the Trump hotel and condominium tower while police and security officers in black suits gathered on sidewalks at the soaring edifice, which has drawn praise for its sleek design but has also raised ethical concerns about the business interests of the new U.S. president.

Vancouver Mayor Gregor Robertson, who had lobbied for the Trump name to be removed from the tower, refused to attend the ceremony in protest of Mr. Trump’s policies on immigration and other matters. “The name Trump has now become synonymous not with luxury and lifestyle, but with racism, sexism and intolerance,” said city Councilman Kerry Jang, who was among other city officials boycotting the event.

Despite the protests and controversy, however, the Trump brothers said Vancouver was the perfect location for a new Trump enterprise.

Calling the building an “an architectural masterpiece,” he added: “That’s what our brand is all about. That’s what our father’s vision was all about, creating one of the most iconic buildings in the world.”

In true Trump fashion, Donald Jr. opened his remarks with a light-hearted swipe at the media. “I’d like to thank the press,” he said before quickly adding: “Just kidding. Good to see you here. I’m shocked. I’m absolutely shocked.”

Donald Jr. also thanked the tower’s Malaysian developer, Joo Kim Tiah, whose father is one of Malaysia’s wealthiest businessmen and who, like the U.S. president, made a fortune in real estate.

“It’s great to be able to do this within a family business. I understand how that dynamic works,” Donald Jr. said. “It either works great or it is a total disaster.”

The Trump Organization is licensing the name to the building and managing the hotel, but does not own it.

Joo Kim, the developer, said he found it “extremely stressful” when Mr. Trump entered politics well after he signed the partnership agreement with the Trump organization.

“I was terrified,” Joo Kim of the Canada-based Holborn Development company told The Associated Press last week. “The people who ran the city were not happy with me. I was scared, but I think they understand. They understand that I’m trapped into -- not trapped, locked into -- an agreement.”

As the opening ceremony took place Tuesday inside the gleaming 69-story tower, people carrying anti-Mr. Trump signs took part in a raucous demonstration to the sound of reggae music outside. Protesters crowded the building’s entrance, including Henry Ho, who brought signs with messages that included “Dump Trump,” and “Is it 2020 yet?”

“I believe a president should be at his core a good person,” the Vancouver resident said. “I don’t feel like that comes from Donald Trump.”

Sue Robertson, a retiree who lives in Vancouver, said the Trump brand is associated with “evil” and said a Trump tower “does not belong in a multicultural, fabulous beautiful city.”

While the Trump-branded tower is a source of anger for many, the new hotel and its namesake do have some support in the region.

“President and hotel owner are two different things. If he can separate the two, all the power to him,” said Joe Taylor, a resident of British Columbia. “At least he’s got the nerve to say what’s on his mind. If people don’t like it, well, they’re not used to that.”

The Trump brothers did not take questions after the ceremony, though Donald Jr. later said in a tweet that the Trump Organization had received a record number of applications to work at the tower: 10,000 applications for 300 full time jobs.

A Trump Organization tweet late Monday asserted the tower was “the first property to open in the city” in over six years. But the city’s former planning director, Brent Toderian, said that wasn’t true.

The media was taken on a tour of the hotel, which included stops at Ivanka Trump’s spa, a view of the rooms where reporters could take a look at the protest below, and the night club.

Located along an upscale six-lane downtown thoroughfare, the tower is the second-tallest in Vancouver and offers majestic mountain and ocean views. A one-bedroom apartment, at 699 square feet, starts around $1 million and the average 1,153-square-foot two-bedroom condo went for $1.7 million but has since gone up. Hotel rooms in the slow season start at around $228 ($300 Canadian).

The chief White House ethics lawyers under Presidents George W. Bush and Barack Obama have criticized Mr. Trump’s turning over control of his business to his sons, saying it does not eliminate potential conflicts of interest. Legal experts also say Mr. Trump’s overseas businesses could violate the “emoluments clause” of the U.S. constitution, which bars public officials from accepting payments or gifts from foreign governments or companies they control without the consent of Congress. A liberal-funded watchdog group has filed a lawsuit against Mr. Trump citing the clause.