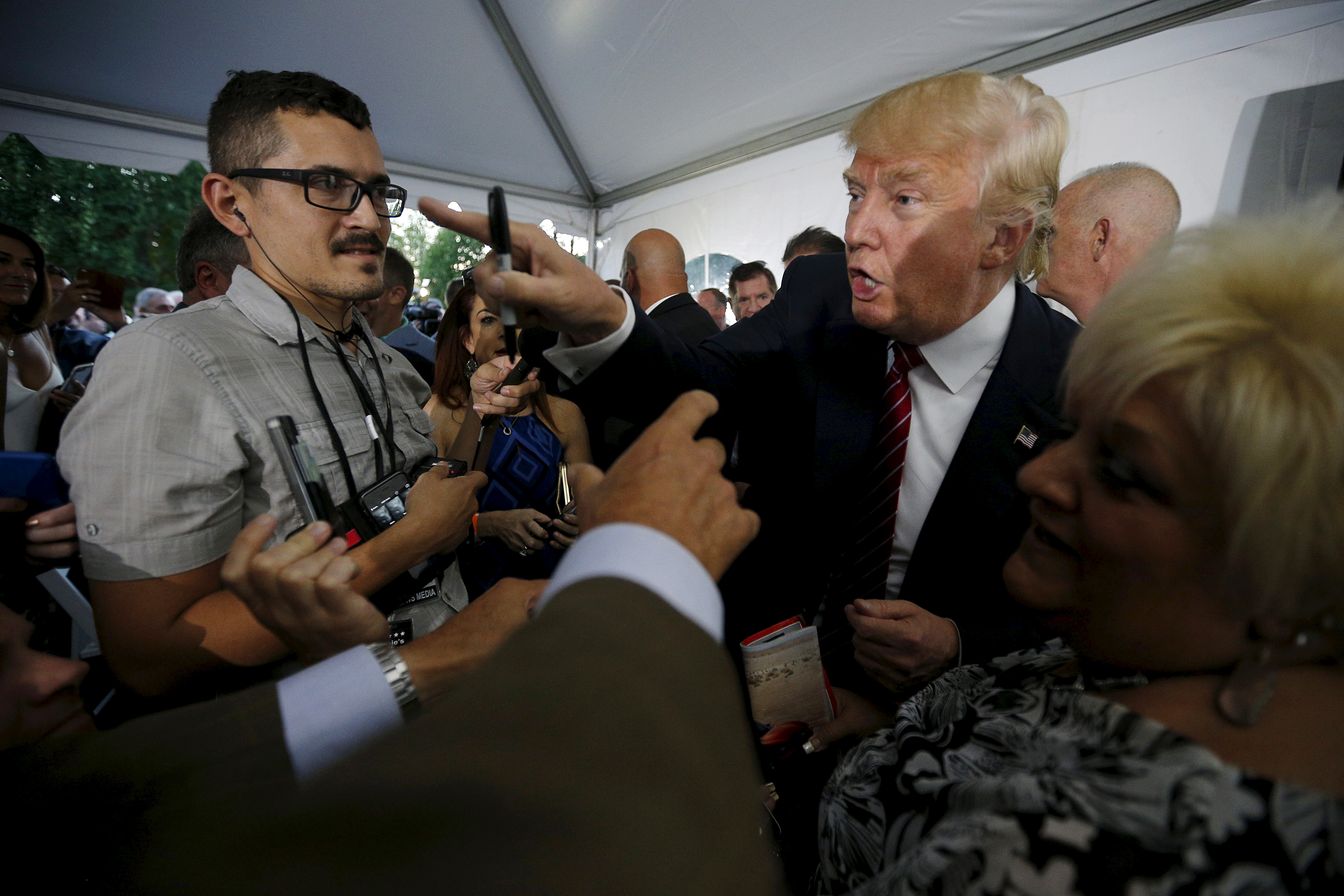 NORWOOD, Massachusetts -- Donald Trump held a $100-per-person campaign event - which he repeatedly insisted wasn't a fundraiser - outside of Boston on Friday evening as he backpedaled on his previous pledge not to accept contributions for his campaign.

"This is not a fundraiser tonight, just so you understand," Trump told reporters at the sprawling Norwood property owned by local car dealership owner Ernie Boch Jr. A combination of die-hard fans and those curious to see the spectacle were treated to food from chef Tony Ambrose and a live cover band, in addition to a speech from the billionaire businessman and Republican candidate.

Attendees outfitted in slacks, a blue blazer and "Make America Great Again" baseball caps, enjoyed the selection of hors devours -- foie gras, truffle carrot soup shooters, and mini mango salads -- as they milled around the front yard of Boch's Monticello doppelgänger of a mansion, excitedly waiting for the arrival of the Republican frontrunner. Men in brown suits with exposed undershirts and women swaying in six-inch heels that sunk into Boch's lush yard, clutched their phones in one hand, preparing for a selfie with Trump, and gripped "The Patriot," the specialty drink of the night, in the other.

Trump said the money raised was only being used to offset the costs of the event and said people attending could choose to pay whatever they wanted.

That's despite multiple signs that were posted at the property's entrance telling those arriving, "Please have cash ready or make checks payable to: Donald J. Trump for President, Inc." and "Entry Fee $100 Per Person."

Everyone who forked over $100 for entry was eager to see Trump up close and in the flesh: aging rockers, the co-founders of Bob's Discount furniture store, the "Ferrari Club of America," a former Patriot's offensive tackle, radio personality Billy Costa, and other self-made Boston celebrities who fashion themselves as Trump's affluent populist allies. Trump, however, repeatedly thanked the Veterans in the audience; it's unclear how many of those in attendance actually were veterans.

"I'm not backing any particular political party, kind of leaving my options open but I find Trump to be an extremely interesting character who says a lot of interesting things," radio personality Billy Costa told CBS News. "Given the direction the campaign and the election have taken recently, suddenly to me, I'm taking him seriously. He says a lot of whacky things, too, but none of that seems to hurt him so he seems Teflon."

Billy Libby, a retired financial planner from Cape Cod, outfitted in a white blazer and periwinkle seersucker pants, told CBS that he'd been to every single one of Trump's events.

"He's like myself, he shoots from the hip," Libby said. "He's a very intelligent man but works from his heart. He knows what is right."

"His immigration plan probably has to be modified but you have to understand what he's up to first. You got to get people caring and then you can work it out from there," Libby added. "But the wall, I definitely believe in it. You need an extremely forceful individual to do this."

Ray and Gladys Boornazian came out from Rhode Island to support Trump. "We saw him on TV and we need what he says. I'm very excited about this. The more people we talk to, the more people hesitantly say to me, 'I can't believe I like him," Ms. Boornazian said to me.

"Because he's different. He shows strength. And he's a business man," Mr. Boornazian added. "More capitalism! And he's already proved he's been able to do that - to execute his ideas."

"He's not a politician. Period!" his wife exclaimed.

The event comes as Trump has reversed course on his early pledge to self-fund his campaign entirely.

"I don't need anybody's money," he said in his announcement speech, declaring: "I'm using my own money. I'm not using the lobbyists. I'm not using donors. I don't care. I'm really rich."

But Trump's tone has changed in recent weeks as he's warmed to the idea, adding a contributions page to his website and attending a fundraiser held by a super PAC supporting his candidacy.

"I actually like the idea of investing in a campaign," he told CBS' "Face the Nation" Sunday. "But it has to be no strings attached."

Trump campaign manager Corey Lewandowski said earlier Friday the campaign had received tens of thousands in small-dollar donations in the last eight weeks from people eager to contribute to Trump's effort. But he said the campaign had not made any efforts to solicit money and said contributions would remain "a very small portion" of the campaign's funds.

Boch said the event had "started out as a fundraiser because (that's) the usual thing for candidates." But Boch added: "It wasn't like that with Mr. Trump. He likes the idea of having people come in. So the money was not what he was interested in."

Speaking to attendees under a giant tent on Boch's yard later in the event, Trump continued to boast about all the contributions he claims he's turned down.

"I feel a little bit like, `What's going on?'" he said. "We're turning down millions of dollars."

He also launched into a personal attack against Huma Abedin, a top aide to Democratic front-runner Hillary Rodham Clinton, who has recently been swept up in the controversy over Clinton's use of a private email server while she was secretary of state.

Trump, mispronouncing Abedin's first name as "Uma," suggested Abedin had shared classified information with her husband, former New York Rep. Anthony Weiner, who resigned after sending explicit images of himself to women he'd met online. Trump called Weiner "one of the great sleazebags of our time."

Clinton spokesman Nick Merrill responded with a statement saying, "Trump has spent the summer saying offensive things about women, but there is no place for patently false, personal attacks towards a staff member."

"He should be ashamed of himself, and others in his own party should take a moment to stand up to him and draw the line for once," Merrill said.