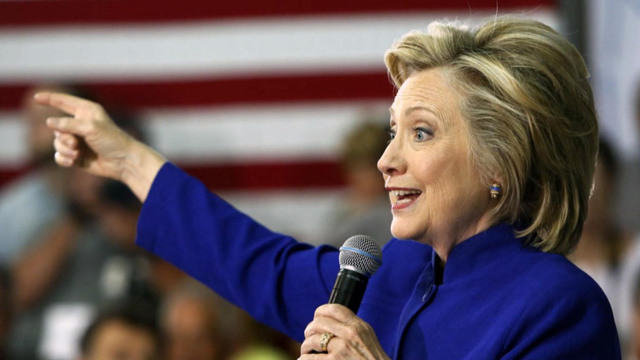 Amid growing speculation about whether Vice President Joe Biden will challenge Hillary Clinton for the 2016 Democratic nomination, the Clinton campaign on Thursday released a series of memos detailing its strong ground game in four key states.

The memos were released ahead of Friday's Democratic National Committee (DNC) meeting in Minneapolis, where Clinton and three other official Democratic candidates (Martin O'Malley, Lincoln Chafee and Bernie Sanders) will speak. DNC members have special influence in the presidential nominating process as "super delegates" who are free to choose any candidate. By contrast, other convention delegates are chosen based on the primary and caucus results. The super delegates make up 20 percent of the total delegates, giving them a fair amount of power in the nominating process. By highlighting her robust campaign, Clinton could potentially solidify more support from them.

In addition to releasing the memos on Thursday, Clinton spoke to a group of more than 100 pledged delegates in downtown Minneapolis. Her campaign has sent a form to some DNC members at the meeting, asking them to commit now to supporting her at next summer's convention.

Here's what the Clinton campaign memos had to say:

In New Hampshire, the Clinton campaign has 36 organizers who plan on engaging more than 3,400 state residents through small gatherings and one-on-one meetings, according to the memos. On top of that, "senior policy advisors" have been "engaging local stakeholders," including the labor community, small business owners, veterans, environmentalist, party leaders, seniors and "even co-chairs of other Democratic 2007 primary campaigns" on Clinton's agenda.

In Iowa, Clinton's campaign has 47 organizers on the ground and 11 offices open. It has identified a supporter in each of Iowa's 1,682 precincts. In the last six weeks, 4,500 new Iowans have been brought into the organization by meeting with an organizer, attending an event or volunteering. Clinton also boasts strong endorsements in the state, from leaders such as former Sen. Tom Harkin and Brad Anderson, the state director for the 2012 Obama campaign.

The Clinton campaign is also boasting about its presence in South Carolina. "For months, we were the only campaign on either side of the aisle with offices and staff reaching out to voters" in the state, one memo reads. The campaign has hosted 508 grassroots campaign events in the state, conducted 791 one-on-one meetings, has 1,887 active volunteers and had 10,225 South Carolinians sign a Commit to Vote card.

In Nevada, the Clinton campaign has conducted 1,712 one-on-one meetings with voters, engaged 2,933 volunteers, made over 250,000 voter contact attempts. It has one office in Las Vegas and a location in Reno set to "open soon."

Meanwhile, Biden will not attend Friday's DNC meeting, but he did address his potential presidential bid with DNC members on a conference call earlier in the week. He told his fellow Democrats he's not sure he has the "emotional fuel" for another political campaign.