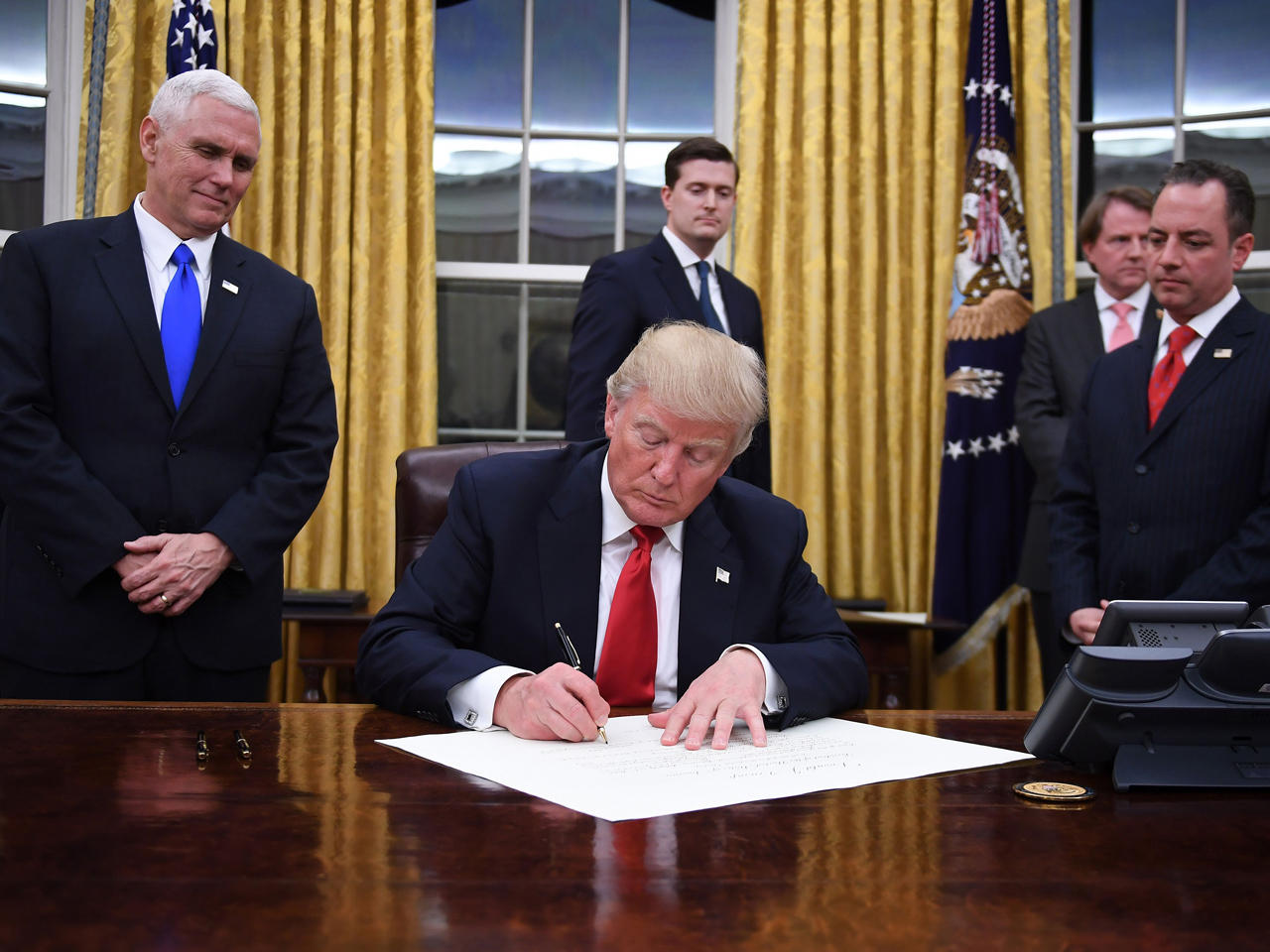 President Trump released a long list of items on the campaign trail that he promised to “pursue” on his first day in office, but it’s been four days since his inauguration and he hasn’t accomplished much of what’s on that list yet.

As a presidential candidate, Mr. Trump vowed that on day one he would begin work on a physical wall along the U.S.-Mexico border, seek term limits on members of Congress, look to institute lobbying bans on former lawmakers, their staffs and former executive branch officials -- and begin suspending immigration from terror-prone regions, among many other priorities.

None of these measures have yet been announced by Mr. Trump, and on some, there is little indication that his administration has pursued them in a tangible way.

There has been progress on some promises, though. Within hours of being sworn in last Friday, Mr. Trump issued his first executive order, directing government agencies to phase out as many components of Obamacare as possible as lawmakers work on the initial process of dismantling former President Obama’s signature healthcare law.

During the election, Mr. Trump said he would ask Congress to immediately deliver a full repeal of Obamacare on his first day in office during a special session. No special session was held, and lawmakers have only just begun the process to develop that legislation, which would only produce a partial repeal of the program.

On Saturday, his first full day in office, Mr. Trump didn’t appear to act on any of his campaign promises and instead attended a prayer service at the National Cathedral in Washington, D.C. and visited CIA headquarters in Langley, Virginia.

The president, however, continued to take executive actions on Monday by signing presidential memoranda that withdrew the U.S. from the Trans-Pacific Partnership negotiated under President Obama and imposing a hiring freeze on federal civilian employees, excluding military personnel -- thus completing two of his promises.

On Tuesday morning, Mr. Trump signed executive orders to advance the construction of the Keystone XL pipeline, which was rejected by the Obama administration,  and the Dakota Access oil pipeline. The Army Corps of Engineers announced late last year that the Dakota pipeline would have to be rerouted, after the Standing Rock Sioux tribe said the pipeline interfered with their drinking water, leading to massive protests.

At the first official White House press briefing on Monday, press secretary Sean Spicer faced a barrage of questions about Mr. Trump’s promises and the timelines to expect action on some.

Spicer said to expect further announcements on trade throughout the week. Mr. Trump promised to announce his intention to renegotiate NAFTA on day one.

Many of Mr. Trump’s day one promises were announced in a speech in Gettysburg, Pennsylvania last October as part of his “contract with the American voter,” which outlined his plans during his first 100 days in office. The only three accomplished so far -- none of which were signed on his first day -- are highlighted below.

Two other promises he committed to fulfilling on day one included canceling federal funding to sanctuary cities and deporting what he says amounts to more than two million criminal illegal immigrants from the U.S. There’s no indication yet that he has taken those actions.

The president had also pledged to reverse “President Obama’s two illegal executive amnesties,” one of which seemed to allude to the 2012 Deferred Action for Childhood Arrivals (DACA) program, which has deferred deportations for people who came to the U.S. as children illegally.

Asked if Mr. Trump was now ruling out the termination of DACA, Spicer told reporters Monday that the priority is “to focus on those who are in this country illegally and have a record -- a criminal record -- or pose a threat to the American people.”

“For now...the focus is going to be on people who have done harm to our country,” Spicer said.

On the question of when the Trump administration plans to begin building the border wall, Spicer said Monday, “I think that the president has noted that this was a serious priority of his throughout the campaign. He has already started to work with Congress on the appropriations avenue of that. And so he is doing everything he can to direct agencies and Congress to commence with that work as soon as possible.” On Wednesday, the president is expected to sign immigration executive actions that include provisions for the wall.

Some of the other promises Mr. Trump has not taken action on yet include directing the Treasury Secretary to label China a currency manipulator (his nominee, Steven Mnuchin, has not yet been confirmed by the Senate); canceling billions in U.S. payments to United Nations climate change programs; suspending immigration from terror-prone regions to the U.S. and instituting an “extreme vetting” process for those entering the country.

As part of his “contract,” Mr. Trump said he would on day one start to “cancel every unconstitutional executive action, memorandum, and order issued by President Obama.” Four days into his term, he has yet to undo any such orders.

Mr. Trump also said on day one, he would begin the process of selecting a replacement for the late Justice Antonin Scalia on the Supreme Court. On Tuesday, he said he would announce his nominee next week.

Mr. Trump had also promised to convene his generals and inform them that they have 30 days to submit a plan on defeating the Islamic State in Iraq and Syria (ISIS). Spicer was asked about progress on that front at his briefing Tuesday, and he said some senior staff is part of that process already.

However, Spicer said some of the people who should be involved, like the secretary of state and ambassador to the U.N., haven’t been confirmed yet by the Senate.

Here is Mr. Trump’s “Contract with the American Voter:”