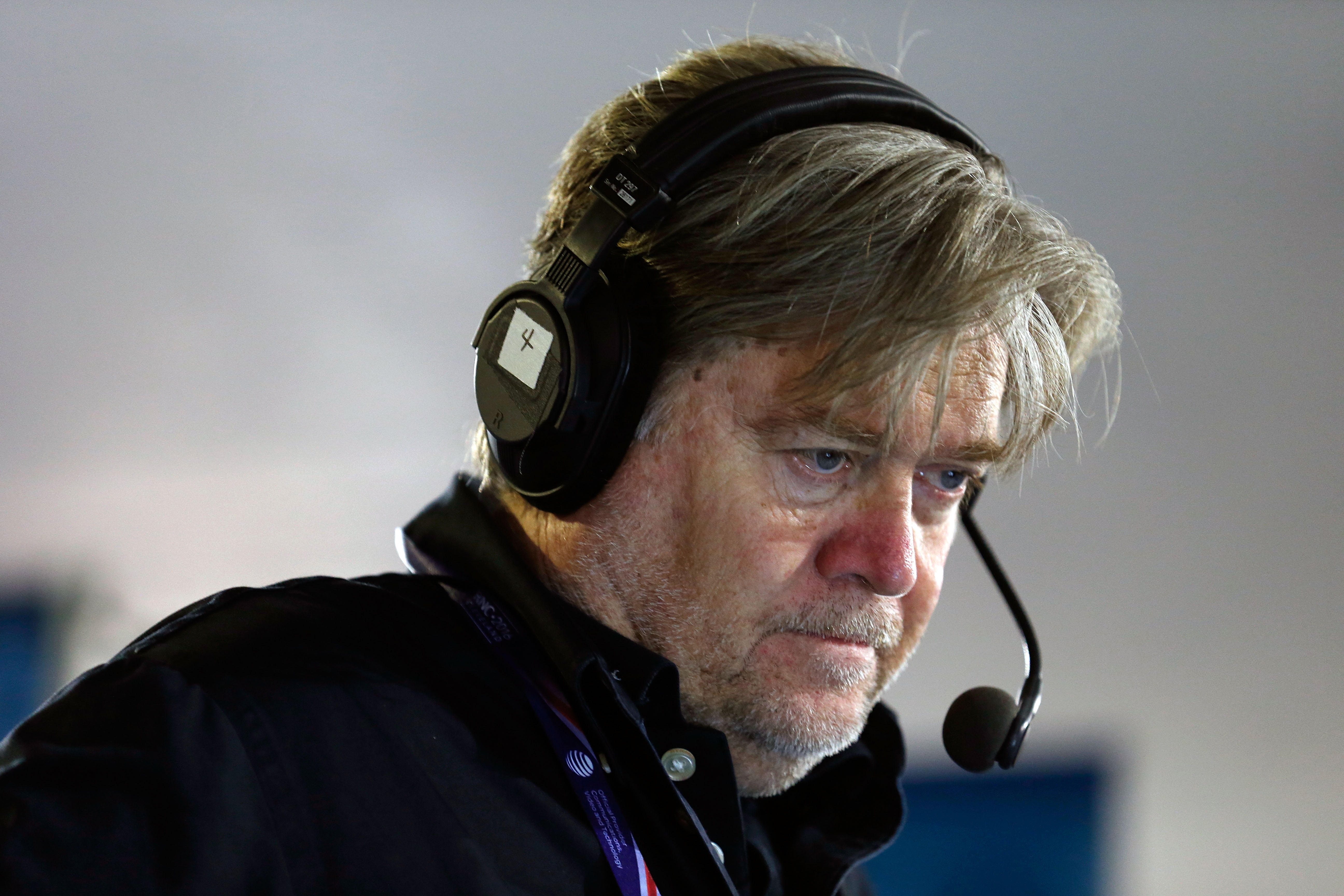 LOS ANGELES -- An ex-wife of Donald Trump’s new campaign CEO, Stephen Bannon, said Bannon made anti-Semitic remarks when the two battled over sending their daughters to private school nearly a decade ago, according to court papers reviewed Friday by The Associated Press.

That revelation came a day after reports emerged that domestic violence charges were filed 20 years ago against Bannon following an altercation with his then-wife, Mary Louise Piccard.

In a sworn court declaration following their divorce, Piccard said her ex-husband had objected to sending their twin daughters to an elite Los Angeles academy because he “didn’t want the girls going to school with Jews.”

Bannon, the former head of Breitbart News, took the helm of Trump’s campaign last week in yet another leadership shake-up. The campaign has been plagued by negative stories about staffers, including charges lodged against his former campaign manager following an altercation with a reporter, and questions about his former campaign chairman’s links with Russian interests.

On Friday, the Florida secretary of state’s office told CBS News that Bannon recently changed his voter registration reportedly from an address where a vacant home was due to be demolished.

Alexandra Preate, a spokeswoman for Bannon, denied Friday night that he made anti-Semitic remarks about the private school. “He never said that,” Preate said, adding that Bannon was proud to send his daughters to the school.

Trump has previously been criticized for invoking anti-Semitic stereotypes, including tweeting out an anti-Hillary Clinton image that included a Star of David​ atop a pile of money.

He also raised eyebrows when he spoke in front of the Republican Jewish Coalition and declared, “I’m a negotiator like you folks were negotiators.”

Clinton has tried in recent days to highlight Trump’s popularity with white nationalist and supremacist groups. She delivered a speech Thursday that linked him with the “alt-right” movement​, which is often associated with efforts on the far right to preserve “white identity,” oppose multiculturalism and defend “Western values.”

Trump has pushed back, defending himself and his supporters, and labeling Clinton “a bigot” for supporting policies he argues have ravaged minority communities.

Trump has noted that his daughter, Ivanka, would soon be having another Jewish child. Ivanka Trump converted to Orthodox Judaism when she married Jared Kushner, a young real estate developer who has become a driving force in his father-in-law’s campaign.

The court filing was among several documents related to Bannon and Picard’s voluminous divorce case, filed in 1997, which was revisited several times as Piccard sought support for tuition and other expenses. The documents reviewed by the AP were part of a request for Bannon to pay $25,000 in legal fees and to cover the $64,000 in tuition it cost to send both girls to The Archer School for Girls for the 2007-08 school year.

Bannon’s remarks about Jews followed other comments that caught Piccard’s attention when they were visiting private schools in 2000.

At one school, she said, he asked the director why there were so many Hanukkah books in the library. At another school, he asked Piccard if it bothered her that the school used to be in a temple.

In 2007, when the girls were accepted at Archer, he told Piccard he objected because of the number of Jews in attendance.

Piccard filed for divorce in January 1997, just over a year after she told police Bannon roughed her up on New Year’s Day 1996 following a spat over money, in which she spit on him.

A police report obtained by the AP said he grabbed her wrist and “grabbed at” her neck. When she tried to call 911, she told police that Bannon grabbed the phone and threw it across the room. An officer who responded reported seeing red marks on her wrist and neck.

Bannon was charged in 1996 with misdemeanor witness intimidation, domestic violence with traumatic injury and battery, according to a Santa Monica, California, police report. The charges were dropped after his estranged wife didn’t show up at trial, according to court records.

Piccard said in her declaration that she skipped the trial after Bannon and his lawyer arranged for her to leave town. She said Bannon had told her the lawyer would make her look like the guilty party if she testified and the attorney told her she’d be broke if Bannon went to jail.

The Trump campaign declined to comment on the abuse charges. But Preate said police never interviewed Bannon. She added that Bannon has a great relationship with his ex-wife and kids.