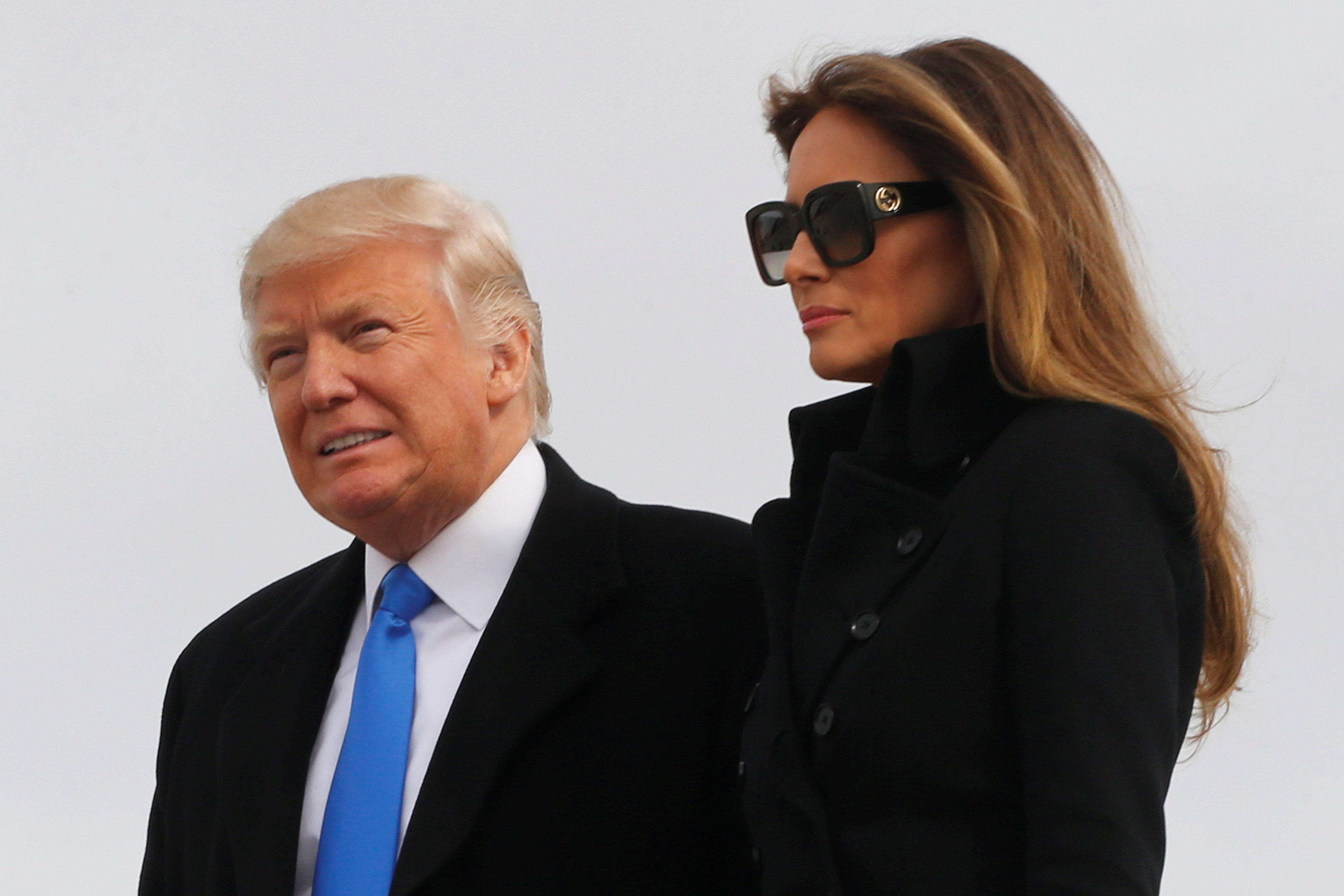 WASHINGTON -- Ready for his big moment, Donald Trump traded in his beloved private plane for a military jet Thursday and swooped into Washington for three days of inaugural festivities. As the president-elect left New York behind, the capital braced for an onslaught of inaugural crowds and demonstrators numbering in the hundreds of thousands.

Mr. Trump was already taking on more of the trappings of the presidency, giving a salute to the Air Force officer who welcomed him as he stepped off the military plane with wife Melania at Joint Base Andrews just outside Washington.

Meanwhile, the White House was quickly emptying out. President Barack Obama’s schedule was clear beyond his daily briefing and his final weekly lunch with Vice President Joe Biden.

Vice President-elect Mike Pence, in a tweet, called Inauguration Eve “a momentous day before a historic day,” as security barricades and blockades went up around Washington in preparation for Friday’s swearing-in ceremony and all of the hoopla and hand-wringing that comes with it.

“We are all ready to go to work,” Pence said at a morning news conference. “In fact, we can’t wait to get to work for the American people to make it great again.”

Mr. Trump headed straight for his own hotel for a leadership luncheon bringing together inaugural officials, top Republican leaders in Congress, his Cabinet picks and top members of his new White House team.

He praised his Cabinet nominees in a speech to the crowd, saying treasury secretary nominee Steven Mnuchin got “grilled” at his hearing Thursday morning and praising education secretary pick Betsy DeVos.

“We have by far the highest IQ of any Cabinet,” he said, before the press pool was ushered out of the room.

Thursday afternoon, he tweeted that he was on his way.

Outgoing Homeland Security Secretary Jeh Johnson said he’d be putting on his “favorite DHS jacket” and taking to the streets to inspect security preparations for the inaugural festivities.

He told MSNBC’s “Morning Joe” that areas where inaugural crowds will congregate will be “extra fortified this year with dump trucks, heavily armored vehicles to prevent anybody who’s not authorized from being in the area from driving something in there.” He said there was “no specific credible threat” related to the inauguration.

Mr. Trump’s public schedule for the inaugural celebration started with an afternoon wreath-laying at Arlington National Cemetery, where he was accompanied by Pence and Maj. Gen. Bradley Becker.

Next, Mr. Trump and his family attended a welcome concert on the steps of Lincoln Memorial ending with fireworks.

Mr. Trump spoke after the performances, thanking his family and thanking his supporters for getting him to the White House. “I’ll see you tomorrow,” he said.

He said his supporters were “tired” of the way things were going in the country, and that they’ll  see change beginning on Friday.

“We all got tired of seeing what was happening and we wanted change but we wanted real change,” he said. “And I look so fortwad to tomorrow, we’re going to see something that is going to be so amazing.”

Never mind about Mr. Trump’s gilded private plane: He arrived on a Boeing 757 that is part of the fleet of military planes that become Air Force One whenever the president is aboard. The president-elect, who flew to Washington without any press on his plane, was joined on the trip by a gaggle of his children, grandchildren and other members of his extended family. Also spotted: bags of dresses and formalwear for the coming days’ festivities.

Ebullient Trump fans were ready for a three-day party.

Eighty-three-year-old Eleanor Haven, of Alexander City, Alabama, was among those drawn to Washington for what she said would be a “wonderful” inauguration. She and her son, Scott Haven, 56, said they had never been to an inauguration before, never even been to a political rally before attending a Trump “thank you” event in Alabama.

“He fought hard for the American people,” Scott Haven said, adding “I think he really has an earnest view of trying to help the working people of America and I think that’s the attraction of him.”

New York Republicans kicked off their inauguration festivities with a breakfast Thursday morning at a downtown hotel.

The crowd, smushed into a ballroom to hear former House Speaker Newt Gingrich, roared as New York GOP Chairman Ed Cox boasted that a kid from Queens was going to be the next president of the United States.

“It’s going to be a remarkable couple of days,” Gingrich said. “Certainly this is the inauguration that no one in the news media was ready for.”

He went on to describe Mr. Trump as “part P.T. Barnum” and predicted he would be one of the country’s most accomplished presidents.

Keeping a wary eye on the weather forecast for Inauguration Day, the National Park Service announced that it was easing its “no umbrella” policy for Friday, allowing collapsible umbrellas along the parade route and on the National Mall.