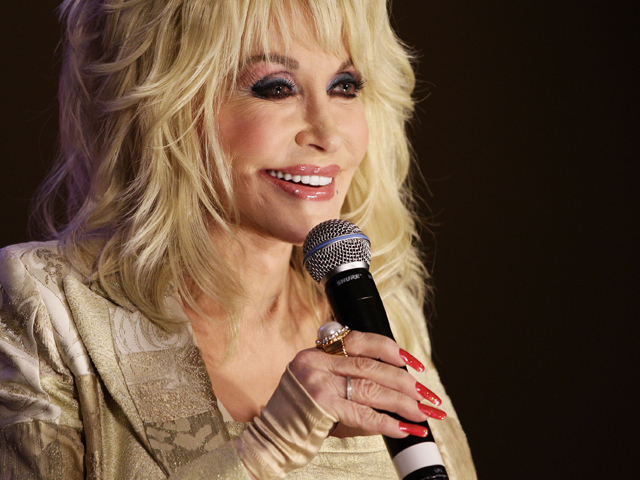 (CBS News) After five decades, Dolly Parton continues to captivate millions with her sweet, Southern charm and memorable songs - including the one the country star wrote that helped catapult Whitney Houston's career in life and in death.

"I have to honestly say that I don't think anybody but me could ever know," she told CBSNews.com of hearing "I Will Always Love You" as Houston's coffin was carried out of the New Hope Baptist Church in Newark, N.J., on Feb. 18.

"It was just like a dagger through my heart somehow," she shared. "It just really overwhelmed me to know that it was so final for her - and that the song with her singing it will live on and the song that I had written would live on... I always say in my shows that I will always love Whitney Houston - and I will. I was just so proud that she took that song to such heights."

In 1974, "I Will Always Love You" topped the charts and continued to thrive on the big screen in 1982 when it was revived in "Best Little Whorehouse in Texas." The song was then recorded by Houston for the 1992 movie, "The Bodyguard." Houston's version went on to sell millions of copies, topping the charts and becoming one of her signature songs.

At 66, Parton is still going strong. The energetic, buxom blonde still has that sass and spunk that only she can pull off. While she jokes that she's "kind of as old as country music is - just about," Parton continues to leave her mark on mainstream and country music.

On April 2, she released her CD/DVD LIVE from London - "An Evening with...Dolly." Parton teamed up with Cracker Barrel, where fans can buy her CD/DVD with two exclusive bonus tracks along with her hits, "Jolene," "Coat of Many Colors," and "9 to 5," performed live in front of her sold-out O2 arena concert.

Fans can get a glimpse of Parton's busy world - from traveling on tour buses, airplanes to behind-the-scenes backstage where costume and wig changes are second nature for the glitzy country superstar.

She also shares some of her stories of her humble beginnings, growing up poor in Tennessee as one of 12 children, where music was her outlet. Parton got her first guitar at age 8 and went onto sing on the radio and TV at age 10. She might have gone from rags-to-riches, but she has paid it forward to her fans and through philanthropic work in her home state.

Parton has paved the way for female country and crossover artists today, which was evident at the Academy of Country Music Awards on April 1 when Miranda Lambert, Taylor Swift and Carrie Underwood took the show by storm.

"I am so happy to see that country music is doing so well and that we have some really true and great artists that are really doing some really good music," she said. "I was so proud...so much of the show was just as much girls as there were boys."

What's next for the Grammy award-winning singer/songwriter, Oscar-nominated actress and theme park owner?

Parton hopes to tell her life story in either a musical or movie version with music in it, but she'd like to be around to make sure it's done right. Who will play Parton? She suggested NBC's "Smash" star, Megan Hilty, who also played Doralee Rhodes in Parton's "9 to 5: The Musical," or ABC's "GCB" star/Broadway favorite Kristin Chenowith.

"I am not under any pressure and I have not sold the show yet - and I don't want any pressure," she added. "I am trying to write my story the way I want it to be told - and even if doesn't get out before I am gone at least I will know that it was done the way I wanted it to be done."

Parton will also appear on "CBS This Morning" on Saturday.